An old map and dinner for birds and friends

In my last blog Jaq and I were gathering wood in the cutting by Newbold tunnel and this got me thinking of the straightening of the Oxford canal back in the late 1830`s. The original canal twisted and turned across the countryside following the contours of the land. This cut down on locks, tunneling, aquaducts etc that are found in a more direct routed canal.
I found some time back in Rugby library a map entitled `Intended improvements along part of the line of the existing Oxford canal` dated 1828. The photocopy I made is not good enough to reproduce on the blog so I have made up my own from modern mapping. 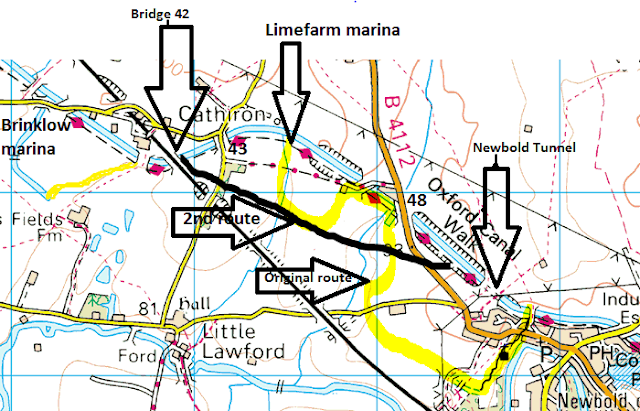 As well as the present route, i have marked in black the suggested second straightening. It goes from about halfway along the Newbold cutting﻿, very close to my last wood site, to bridge 42 (actually slightly left of my marking). My Yellow marking shows the original line although there was more. Opposite Lime farm and Brinklow marina`s the original line went out into the fields turning back along the contours.
Not sure why the second route was not used, perhaps the land owners would not sell to the canal company.
Hope everyone is enjoying the Christmas break. Jaq and I spent a few days at Barby or to be exact Onley prison moorings. Sounds a bit ominous to those without the benefit of a watery basement but i can assure you the prison lies a decent distance back from the canal with plenty of woodland between the two. For three days we had it all to ourselves, the mooring that is. I guess the prison was pretty crowded. Several boats came by including two hire boats from the Ashby canal company. I managed to have a short chat with one crew and like us and many other boaters they had eaten Christmas lunch on board. 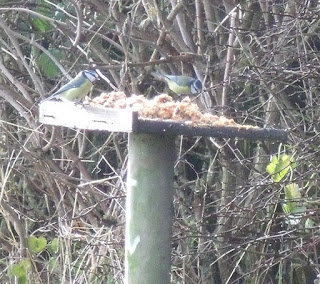 Talking of lunch while at Onley we provided regular meals for the local bird life. The bird table was installed by I think Bert on Nb Twinkle so all it needed was food. Jaq made up a tasty meal consisting of fat and rind from Gammon steaks, toasted seedy bread and raisins all mixed with chunky peanut butter. Every batch went in no time. Talking of bird food have you noticed the lack of Hawthorn berries this year. There seems to be Rosehips but a very  distinct absence of the small Hawthorn berries the birds feed on through winter.
Every mooring eventually gives us itchy feet and the urge to move increases. The rain stopped and the Sun appeared tempted us to cruise into Braunston. We soon came across friends and fellow bloggers Jacquie and Stein on Nb Like Ducks 2 Water. They accepted a dinner invitation offered when we last met them on the Macclesfield canal back in the summer and a lovely evening was spent with two real nice genuine people.   ﻿
Posted by Les Biggs at Saturday, December 29, 2012

Hi Les, there are very few hawthorn berries around because the contractors who cut the hedges do it at the wrong time of year and too deeply, cutting back to old growth. Hawthorn flowers and hence the berries come on new growth - how often do you see tall hawthorn bushes along the canal these days. The National Trust do it right though we’ve noticed. Happy New Year to you both.

Yep--See what you mean Carol It is a shame some of the birds will have trouble surviving as a result.
Les

Happy New Year and hope we bump into you sometime in 2013!
Les