Jaq and Les in new Tesco ad?, NO. Volunteer lockie

Recently we cruised into Braunston with the intention of  going down the South Oxford canal for a week before we leave for the U.S.  After spending a night in the Braunston area we decided just because we could that we would re-trace our route and return to Rugby to get some bits and bobs from the DIY store.
Now while there we popped into Tesco for a few supplies as we will be having our friends Andy and Tina on board for a meal. On entering we had free pots of Yogurt thrust into our hands and as the giveaway was repeated on our exit we now have 4 pots in the fridge.

Wandering around the bakery isle we were asked by a camera crew if we would answer a few questions on camera as part of a promotion by Tesco and Warburtons. The film was just for in house use so our exact words were recorded rather than a survey form being filled in. The inducement for 5mins of our time was £5($7.50) in cash not as I expected a Tesco store voucher.

So off to find an out in the country mooring we passed through Hillmorton. 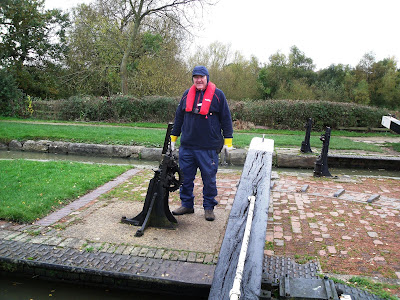 This is Colin at Hillmorton locks. He is a CaRT volunteer giving up Thursday each week to operate the top lock. Today there was another volunteer at the bottom lock who contributes 2 days per week. Colin says CaRT pay his travelling expenses to and  from home up to 20 miles. As Colin rightly says these locks are very busy during the season and if they can show hirer's how to operate a lock it will benefit us all. 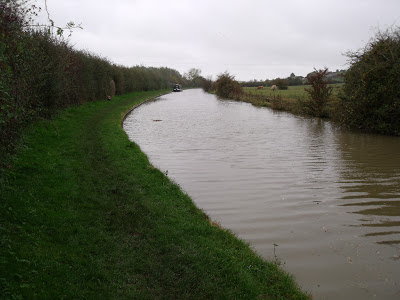 scene at 4pm with just Nb Valerie all alone. Now at 7pm we are sharing the peace and quiet with two other boats.

Bert the Gnome aka Ross waiting for you to e mail re a meet.
Posted by Les Biggs at Thursday, October 25, 2012