A lock and a licence

The signal﻿ is near useless tonight which is very unusual in that mostly the upload of pictures would be slow but possible. Just the one pic tonight.

It shows BW carrying out an emergency stoppage as we came up to Hack Green locks. As we approached the work to free a stuck paddle mechanism was coming to an end with other boats delayed for just 45mins.
For those here and in the U.S who are not familiar with these quick stoppages I will try to explain. Look at the guy on the left and ignoring the temporary footbridge the 1st thing on HIS left is the black ground paddle that needs attention below water. Next along is the lock gate that holds back all the water you can see as a boat descends in the lock. 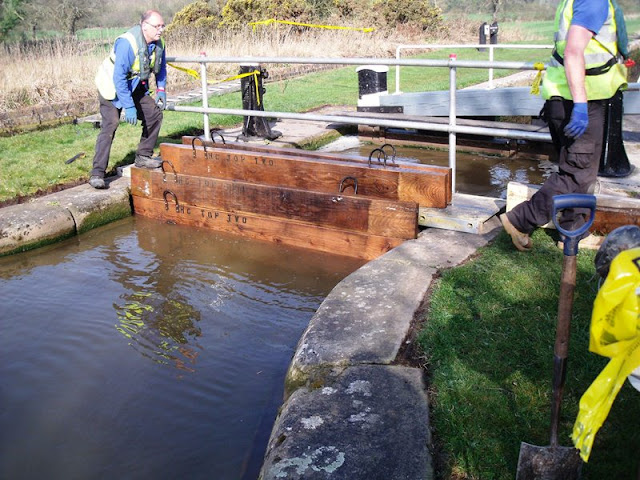 The section that needs to be drained is between our man on the left and the lock gate. In the picture the wooden boards called `stop planks` are being taken out but you can get an idea of how things work.
The 2 that are still in the water are located in grooves in the stone each side and these stop planks will one on top of the other go to the bottom of the canal. They will then take the place of the gate holding back the canal. The water between the planks and the gate is then drained through the gate and a man can go down a ladder to effect the repair.
Once they take out the top plank water starts cascading over the planks and pressure equalisation causes the planks to pop up to the surface for removal. Hope that helps some and was not boring for others.

Ok now all at once the signal has improved so on I go.
Just recently Jaq and I were talking of car hire and senior citizen discounts in the U.S. when we go back in November. I suddenly had a feeling about the expiry of my UK licence as I was thinking it run out at age 65. Yes I am 64 but it did get me checking. Now  the thing to be aware  of is my entitlement listed on the rear of the licence needs renewal at age 70 (2018) but on the front it states the licence expires in 2015. Check yours and note the dates.

I got my 1st licence 48years ago for a motor bike and car/bus 44years ago. Now this next piece will shock those in the U.S.
In all those years I have never been required to take an eye test to re-new my licence.
Jaq in Washington State had to hand in her old licence at the driving test centre take the eye test and if she passed she got a new licence, if not go away and get yourself glasses.
Posted by Les Biggs at Saturday, April 07, 2012

Les, that made me get my UK one out, it was issued in February 1977with no photo, and is good until 2021 for motor car motorcycle classes, they have changed the rules since I left, it seems. Might have a surprise when I go to change the address later this month!
My Ontario license with photo expires on my birthday next year, and is also good for car and motorcycle. There is a random eye test on renewal, mandatory at 65 years old.
See you on the cut soon.

Thankfully the locks on your canals are not that deep, unlike here at two hundred feet in places.
As to eye examinations Mike will attest I already wear spectacles for driving and just about everything else too! ah yes, the joys (not) of advancing age.
Mike I think our licenses are in five year increments for renewals.
If I ever come to the UK shall attempt to get an International driver's license. Next step would be to find a motor vehicle large enough inside to allow me to drive comfortably. at 6'8" in height and at 30 stone, nothing fits!

Your permit to drive last until you are 70. Your photo Licence has to be changed every 10 years. It is just another tax. You can drive with an expired Photo licence and not be done for driving without a licence because the paper sheet does not expire untill you are 70.

Hi Mike
If you change your address you will have to have the photo licence. So if the address on the licence is still maybe someone you know leave it and save the aggro of getting a photo etc.

Bryce
When I drive in the U.S. my UK licence is accepted as a visitor to drive.
Jaq`s licence is re-newed every 5yrs.

Hi Maffi
Yes just another tax. The paper licence doesn`t have an expiry date that i can see. It does show expiry for provisional entitlements as being my age 70. I suppose thinking about it they will issue both paper and card if I re-new at 70.
Why with all the technolodgy they need a piece of paper to list offences beats me.

Les. Its the photo that expires. you have to get this done every 10 years or it invalidates your license. £20 to do it. You can do it on line and if you have a modern passport (one with a microchip) they can take the photo from that. I have just had to get mine done.

Hi Annon
Interesting that they use the passport. I have a micro chip passport so will look into that when i re-new.

Not got mine back yet from my recent change of address but will check when i get it back...However we recently flew to New York and on our return noticed my replacement passport (original Lost)had the surname spelt biggz and not once questioned entering the US or arriving back in the UK so much for Security, Sarah of course thought this was highly amusing unlike me who spent the whole break wondering what US prisons were really like

I kept my UK license for years, but then for some reason I no longer remember it wasn't valid any more and I had to renew. The new form made me sign that I swore I was a UK resident and after much soul searching I decided I couldn't sign. I did check with them, but no, my old license wasn't valid and I couldn't have a new one...darn terrorists anyway! Luckily I can drive on the US one and no-one seems to care about that.

Yep, Hoping ot renew my U.S. License when I return in November.
Jaq