In 1944 the Llangollen canal was closed to navigation following commercial traffic ceasing some 5years earlier. In the 1950`s the Llangollen re-opened but the boating activity was now for pleasure and it was to be some 40 years later the short section of the Whitchurch arm opened.

Much of the original canal that went into the town has been developed and some Bungalows built on the old route have suffered subcidence so a local who moved from one informed me. He also told me the trust were having problems with a new canal route because the Enviroment Agency won`t allow canal water to mix with the Brook that runs through the area. If you look at the route of the Brook walking into town you can see the problem because the old route away from it is no longer viable.

Anyway I am not sure if the the proposed development and the cost,£490.000($735.000) , which is bound to increase is worth the effort. The Trust want to take the arm into the town eventually so rather than a very short section of canal ending in a basin that will berth just 8 boats would it not be better to head into town as far as money will allow. Please comment as I would be interested in your views. 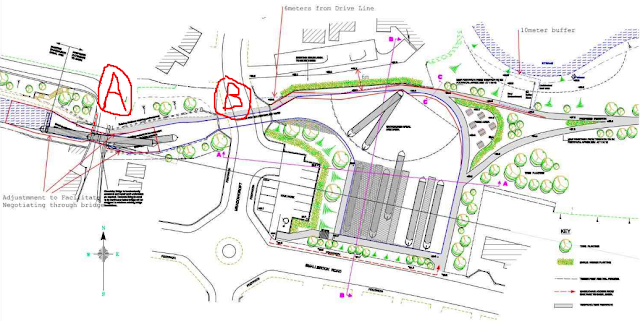 Above is the plan submitted for approval and I have marked it A+B. My pictures 1and 2 below are A on the above and pictures 3,4 and distant shot 5 are at B on the above plan. The road along the bottom of the plan is the bus route from town and most boaters would alight at the roundabout if that helps to picture the location.


Above the end of the present arm.


Standing under the bridge in picture 1 and you can see it is not far to the next bridge that was created for the canal route during housing development. As soon as the canal passes under that bridge it will enter the basin to the right. Probably no more than 4 boat lengths between these bridges.
Above a close up of the bridge created for the canal.
Above standing under that second bridge and that grass mound to the right is the basin site.

Above looking back to that second bridge and the grass bank that will be dug away for the basin.


They talk of the basin being nearer town and the bus stop but for the small distances involved that is not a good argument.
To me it all seems a lot of work and I would rather see the canal make progress towards town with that money being used for a lock that will most definitely be needed. A decent length of canal could be dug if that basin was not dug out.
As I say it would be nice to hear your views.
Posted by Les Biggs at Friday, April 20, 2012

It seems to me one should never try to make sense of government spending. It will just make your stomach hurt. When I first started working in Van Doren Hall they painted the window frames and trim on this brick building at a cost of around $100,000. Two years later, which was already budgeted when they painted the trim, they replaced all the windows so they had to repaint around all of the windows.
Love your posts. Korolyn

Doesn't the ground slope downhill if you go much further? You can keep on the level to the proposed basin with a minimum of earthworks.

After that it's a significant extra cost in locks and earthworks, to say nothing of the time to get planning permission and, possibly, purchase the land.

You and I might have the time and inclination to go right into town but most boaters on the Llangollen are hirers and wouldn't have the time to go down a lock or two and back up again so they would probably still moor at the top.

After walking the Arm last year I agree with you. The final objective should be to get the canal much closer to the town. Actually the proposed route doesn't look too difficult!

Korolyn
Nice to hear from you, i remember with joy our meal we 4 had at your apartment.
Yes governments do waste money but in this case it is a private group that is struggling to raise the cash.
Les x

Hi Paul
No lock is needed on this scheme but for sure as you say the ground drops past the proposed basin.
They do mention an incline plane for the future so I don`t expect to visit the town in my lifetime.

Hi Tom
Yes the route into town could be achieved thinking about it with perhaps an aquaduct bridging the brook. Although an area towards town has been fenced off for housing right alonside the brook further on so not sure about a canal route passing if the E.A. want the brook separate from the canal.

For inspiring work done on canal restoration, have a look at the Wey and Arun Canal Trust's site.

They are slowly restoring 'London's lost link with the sea' and what they have achieved so far is simply incredible!