Warm and dry on the Llangollen Canal

Woke this morning and the rain is pouring down and the wind is making waves on the canal. Sitting here late morning with all plans for a move abandoned we have the stove full of logs and the talk is of Bacon sarnies (sandwich) for lunch.


The hire boats keep going by battling on with perhaps a date to return the boat or having just started their holiday a determination to get as much water behind them before the week has passed.
One has just passed with 3 men on the back all wrapped up with 2 of them with backs to the wind the driver having pulled the short straw is facing rain coming at him in the wind almost vertically. I couldn`t see through the misted windows but i guess the women were down below with the heater on drinking tea and making next years holiday plans to a warmer climate. Jaq and I recommend Washington State and the 100F+ if that is what rings your bell.
Anyway there are many hire companies operating on the Llangollen canal and I just looked up and saw a Crest holiday boat go by. The price for a 6 berth boat this week the price is £975($1465) with a reduction of about £200($300) for a smaller 4 berth boat.
A boat just went by and the lone steerer had Tesco (supermarket) plastic bags on his feet, you see how we Brits get by when no waterproof boots are available. 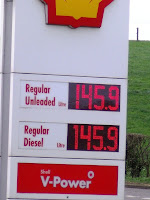 Diesel prices on the Llangollen have in my memory always been higher than the rest of the canal system. Perhaps the one way in/out has the marinas thinking they have a captive audience to charge as they fancy. We keep on board Nb Valerie, as do many other boaters,﻿ 2x20 litre Jerry cans mainly for winter in case of being frozen in. Not having used the fuel for a while and always being aware of diesel bug I decided to transfer the spare fuel to the main tank. Having been told of the almost canal side garage at Grindley Brook that has a red diesel pump I went and re-filled the cans with fresh fuel. The Red diesel at the garage was 81.5p per litre. The fully taxed road price was £1.45.9. Now our U.S. readers this is $2.19 per litre and I am not going down the road of conversion as our gallon is different to yours and as for litres to gallons, best of luck and feel free to work it out.

Oh while I remember the hire boat site tells hirer's;
ADDITIONAL COSTS: Diesel: The diesel used will be charged for on return from your holiday. The cost of diesel is set at slightly over supermarket prices prevailing at the time of your holiday. Your boat engine will
I am just wondering how much do they declare to the tax man having charged the hirer full duty. Plenty of hire boats moor up and have the engine charging batteries. Perhaps if they filled a declaration for each hirer on a 90/10 basis that is a lot of cash over a hire season. 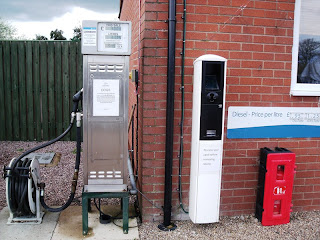 Anyway for U.S. readers this link will help you understand the tax situation. Basically it is the UK being told by the EU how to run the country with none of our spineless politicians having the guts to..........sod it I`ve left all that crap on the land and can`t be bothered getting myself worked up. I will say though, I strongly believe if the British public were to vote we would not be in the EU. The diesel pump on the left is at Whixall, a marina on the Prees arm owned by BW and has the ability to accept your card and dispense fuel 24hrs per day. The price on the far right shows £0.95 @ 0% ----£1.25 @ 60% ----£1.45 @ 100%. The pump was set at £0.95 when I used it and can only assume it is changed by the marina so how can you self declare? The key pad gave no choices but as it was set at the cheapest price I did not dwell to much on it. Anyone know the full story?
Chirk marina when we stopped by for a bottle of Gas(propane) was charging a higher price but the details are sketchy in my head. I remember seeing in the office the list read £1.10 @ 20% and I think the 0% was £0.98.
Outside the rain still falls blown by the winds, we are still snug in front of the log burner, the hire boats going by out number the private boats by 20/1 and so in writing this blog not much has changed. The smell inside the boat is now of a Bacon joint boiling for dinner tonight something Jaq has taken quite a fancy to.
Oh and by the way the Bacon sarnie Jaq cooked me was toasted with Cheese and Onion.......Yum!

I think I'd rather be cruising in the rain, rather than here. Holiday was ace. Definitely this year for my own boat.
Take care
Ross

As a matter of interest were you asked to declare a split on the diesel you bought at the garage?

The British public might deserve a vote on our continued membership of the EU, but only if they can pass an exam to show that they understand the implications of their decision!

The hire boat declaration is interesting. When we stopped for diesel at a hire base in Worcester last year, the guy in the office said that each month HMRC sent them a guide of what proportion to declare as propulsion. He said there were different suggested rates depending on whether the boat had diesel heating or not, and the rates changed each month. He said that even in the height of summer, the propulsion rate was never above 40 per cent. Of course I don't know whether other hire firms also get such advice every month, or what they declare, but it would be interesting to know -- especially if they're charging hirers a figure that amounts to 100 per cent propulsion.

Oh come now, Les, it hasn't been 100F+ here for at least the last two years....just feels that way to you guys from the frozen north :)

Ross
Good luck with the boat, it`s the way to go.When you live aboard you DO NOT cruise in the rain unless you need to be somewhere at a specific time.

Kevin
It`s the little extras that Jaq adds that makes it Mmmmmm!

Jim
I was not asked for a declaration nor for what the fuel was for. Perhaps if i was seen to be putting it into a car/van they might have said something because of the legality.
In a can, I think they have no liability to ask.
Yes I agree about the exam on the implications even for myself. The problem is who the educators would be before the test. For sure we can`t believe anyone in the boy`s club(Parliament)to tell us the true facts.
Les

Adam
They are for sure charging 100%.
Interesting the words "propulsion rate never above 40%" So why do they suggest to us non hirers 60/40
I never worry about declaration. As long as the seller is happy that i fill in the form, I declare what I want and believe me after 42 years paying mega income tax I sleep like a lamb at night.

Sally
If you look at the blog for Sept 3rd 2011 titled "Almost time to leave Pullman" you will see the temp clock outside Dissmores reads 104. Jaq and i also saw the same figure on 2 others in Pullman.
Anyway you lovely wee Scot, we both look forward to seeing you and Joe stateside in Nov.

Ken
I have faith in your figures. At the moment petrol is $3.90 in Pullman WA. U.S. gallon of course.

1 UK gallon = 4.546 ltr, 1 US Gallon = 0.8327 UK gallon or 3.785 ltr.
£1-45.9 per ltr = US $8.89 per US gallon
Terrifying after a spell in California with the Grandchildren!Ken Nb Cleddau
----
Here in Southern Ontario
the price per litre hovers between C$1.30-C$1.40 and can change up or down overnight.
The definition of shock is seeing somebody from the USA fill their vehicle at one of our filling stations...the comment often is "how can you afford such prices?" where upon I reply, we have resonable health care!

Other places in Canada and Northern Ontario are often considerably more, as high as $1.70/litre. Cost of transporting
the fuel to distance locations accounts for the higher fuel cost.

This is BTW for unleaded regular fuel. Diesel, mid-grade and high test or premium is considerably
(often 20-30 cents more) than regular fuel.

Fuel used in agriculture be it diesel or petrol is often coloured, green. Less tax, hence the different colour.
Aviation fuel is a whole different fuel and tax structure.

Hi Bryce
thanks for those prices. It`s interesting for everyone to see how prices vary.
Here our diesel if used for farming and marine is coloured red.

Hello Carol
Always nice to hear from you.
Yes the diesel is an extra. Not sure how many others do or will in the future make this the norm.
Cheeky sods are making extra by charging the customer full duty as well.
Les