Steel, Steam and Stars III is a mega 9 day steam event at Llangollen. It is being held by the Betton grange 6880 society who are building a GWR Grange loco here in Llangollen engine shed.
Along the route there are events at Glyndyfrdwy and Carog stations that include vintage cars, tractors, steam driven vehicles and Model railways. Double headed trains with at times 12 engines in steam there was always something happening. Jaq enjoyed her first ride on a steam train as i`m sure did the huge crowds at every station.

In 1955 there were thousands of steam engines operating when British Railways decided to modernise and go over to Diesel. All those steam engines would be a big scrap operation and of the many yards involved the Woodham brothers at Barry in Wales.It is the most well known because of the large number of engines that were saved from the cutting torch by preservation society's all over the country. The story of Barry scrapyard can be read HERE. There are 3 parts so if the first part steams you up search out parts 2/3.

I must confess to a love of steam and hope this might interest others.
If you prefer Diesel check THIS LINK sent to me by Mike who by now is here in the UK having sold up in Canada to begin a life afloat. The train has 5 engines and 25 coaches.

Llangollen station now terminates just out of shot at the bottom of the picture. It once passed under the bridge in the second picture on it`s way to Ruabon, crossing the canal at bridge 39, and the main Shrewsbury/Chester line.﻿ 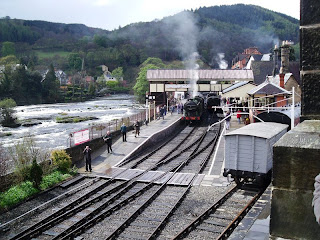 Looking through the station with the River Dee flowing by the line went as far as Barmouth until closure of the passenger line in 1965. Ten years later the railway re-opened with just 60 feet of track and to date the track now stretches past Carrog(7.5miles) and with new track recently laid is on it`s way to Corwen. 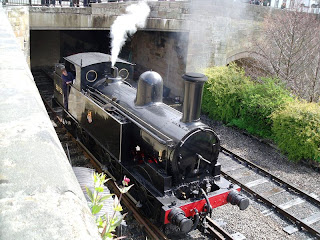 In British Railways Black 0-6-2 loco 58926 built in 1881 and owned by the National Trust sits waiting to switch platforms. 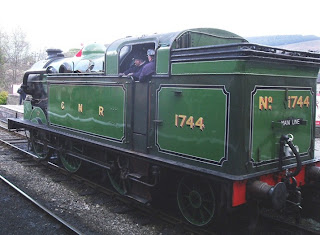 1744 is a 1921 0-6-2 tank engine owned by the Gresley society and visiting for the event from the Great Central Railway. 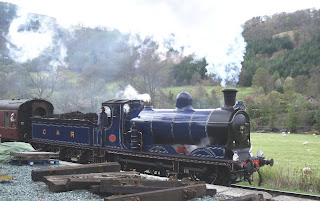 Built by the Caledonian railway in 1899 this 0-6-0 loco numbered 828 is visiting from Straphspey Railway in the Scottish highlands. It spent a lot of it`s working life on local routes from Aberdeen. 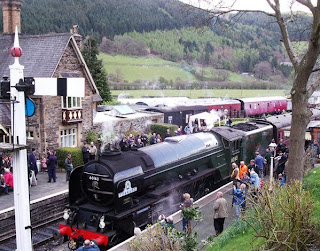 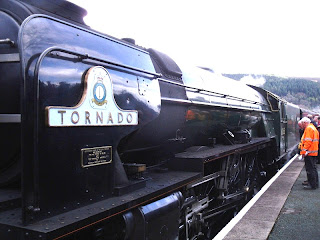 
I liked the Auto coach set up. Generally the coach and steam engine would be coupled together and when the train arrived at it`s destination the driver would go to the coach and drive the train back. You can see the driver just about to pull away towards camera. The controls he has are speed, brakes and whistle and are linked to the engine where the fireman remains to tend the fire. 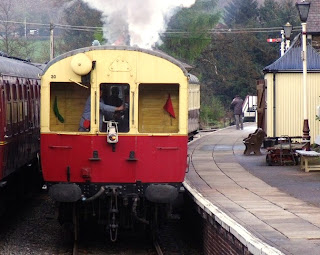 ﻿
This train consists of 2 coaches with the engine in the middle. A link to a short film of the Auto coach working is http://youtu.be/RhoJxeZJ5nQ﻿
Posted by Les Biggs at Friday, April 27, 2012

TWO steam locos came past my house today - one advantage of living next to the West Coast Main Line and the steam depot at Carnforth that provides the locos for special trains.

Steam, wonderful steam!
If get over there, I can fill everybody in on the railways here in Canada having been a journalist for one US magazine and a contributing journalist to publications in Canada & elsewhere.
Mike can fill you in once he gets
settled on NB Garnet,

Ah this reminds me of when I took Kai to Llangollen when he was small, he wasn't at school and the week before they had a Thomas the tank engine week. When the train came in he was really upset that it wasn't Thomas so I convinced him that the train wasn't acting that day and he didn't have his makeup on!!!!
Apparently it is a really nice trip on the train, sadly we didn't do it.

Still sniffing out a bit of steam then?

I'll have to take Kyran to a steam railway sometime this year, he's only seen the one up at Whipsnade so far.

Lets us know when you're both back down here and we can have a catch up.

Have you tried walking the towpath from Llangollen back to the aquaduct?

The trackbed follows the canal for some distance. I think there would be problems with landslips if they tried to re-instate the railway there though.......

Great to know you are a fellow steam buff!

Have fun in llangollen's many secondhand bookshops too!

Was up at Llangollen a few weeks back, there was only a G.W.R. pannier running but the grandsons were awe struck, nothing quite like steam.

Jim
Not enough information. Can never have to much with steam. What locos were they?

Bryce
What your going to need if you come to the UK is a steam powered narrow boat.

Carol
You could try some of the Steam lines down south. Just google and maybe you can find Thomas days.
The llangollen trip goes along the river in places and is very pleasant.

Hi Mick
Not sure of when or if we are coming to far south. It all depends how the water levels pan out this year.

Hi John
never tried that walk but can imagine over the years how the route could now be un-stable in places. I think the rail group have plenty to keep them busy in the other direction.

Hello Graham/Jill
Normaly there would be just the one loco at quiet times but this was a big event and i`m guessing enthusiasts came great distances to attend.