After being away at the wedding it was time to move out of the Marina and get used to living without an electric hook-up and also it was nice not to have a boat moored just a few feet on each side. Can`t imagine how people living in marinas put up with being hemmed in like that but i suppose they are working and living on a boat for reasons that suit them so each to there own, live and let live is my thought on the subject.

I chose to leave the boat in Gt. Haywood Marina following recomendations from other boaters and i would encourage others to moor here as the staff were both helpful and friendly. The only niggle i had was i had to remove my winter stockpile of logs from the roof to the cratch as the rules say no untidy roofspace. The chap in the office was very nice explaining that if he let me in with the roof wooded then the residents would kick up even though i was just a temporary moorer. Still rules are rules and it took just 25mins to put the logs into the cratch area.

So exiting the Marina and the plan was to head for Rugely and re-stock the galley but the weather had other ideas and as i entered the first lock at Gt. haywood the heavens opened and before i could reach inside for a coat i was soaked and i mean as if i had fallen overboard so sudden and heavy was the rain. So the plan that was now wasn`t anymore and after leaving the lock i squelched up i mean moored up and a change of clothes and a cuppa led to a night stop.

The next day i set off for Rugely and got to Colwich lock all of a mile into my journey and as i approached the sight of 3 boats queuing at the lock sounded alarm bells as before i set off i had a cuppa on the front deck and not one boat passed so i knew there was a problem with the lock. Walking down i discovered one boat stuck in the lock 4 of us behind him and 2 more waiting to come up and BW`s arrival imminent. An hour later the queue of boats had grown in number to 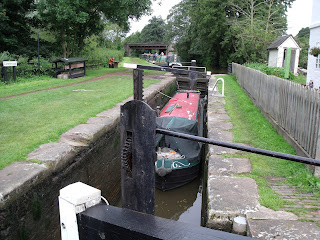 13 with a grp cruiser and a day boat turning back the delay was almost 2 hrs and all for a bit of wood stuck under the gate, oh well that`s boating. 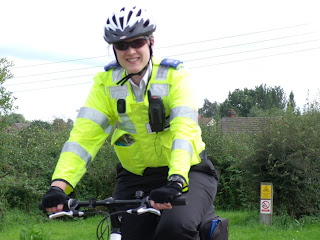 Seems to be a lot of police biking the towpaths nowadays and if they all smile like this one i`m all for it. Back at Stone a couple stopped and i refreshed them with a cold drink, yes it was hot and sunny then and the way the weather is of late i`m thinking that was summer. 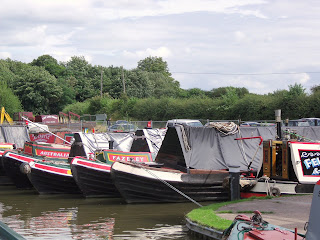 Passing Alvecote Marina a few working boats were moored outside the Samuel Barlow pub and not having seen them before i can only imagine they are returning from a show or going to one . 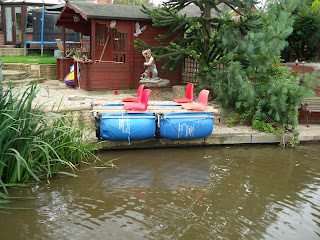 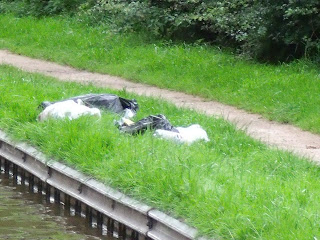 and this made me angry.

So my plans are now to head south and go through London and onto the Rivers Lee & Stort but that might change have to see how it goes.

I nearly decided to stop blogging as i wasn`t seeing much just the open fields and not much in the way of, history i`m told by other boaters is my blog style, things to delve into that others might find of interest. But for now i`ll just see how it goes and maybe add in some other bits and pieces.

Must say hello to the crew on 4Evermore and Shipperke who called out they read the blog as they cruised by.