Last w`end Saturday to be exact was the 25th Anniversary of the re-opening of Blisworth Tunnel. The tunnel opened for boat traffic in 1805 and for 5 yrs previous to this a horse railway transported goods over Blisworth hill having been un-loaded from boats one side of the tunnel to be loaded once again on the other
.
In the late 1970s the bottom of the tunnel showed signs of lifting and in 1979 the tunnel was closed until it briefly re-opened in the summer of 1980 with BW crewing boats through. By late 1980 early 1981 such was the movement of the tunnel bed the walls were found to be lacking support and the tunnel was closed.

£4.3 million pounds was the cost of removing the centre section of the 3km tunnell and lining it with pre cast concrete rings.

The tunnel re-opened to boats on 22 August 1984 hence the 25th Anniversary celebrations.
Some pictures can be found HERE and don`t forget to click part 2 at the bottom of the page.

A lot of activities took place on the Saturday both in Stoke Bruerne and Blisworth programme
but for me the highlights were a talk and slide show by 2 of the tunnel engineers from Mowlem who were on the lining team. Following the talk i sat in the Museum and watched the archive news reports and other film clips made during the repair. 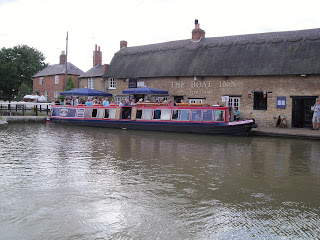 Out on the canal Tunnel trips were very popular with the public with the majority just going a short distance into the tunnel whilst a full length trip could be made with the option of a return journey by vintage bus. The 2 trip boats providing the trips were `Charlie` & `Indian Chief`. 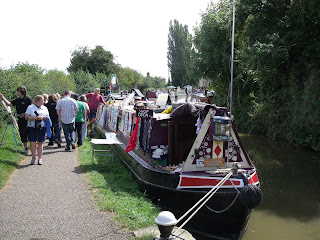 Along the towpath leading to the tunnel several boats were selling their wares. 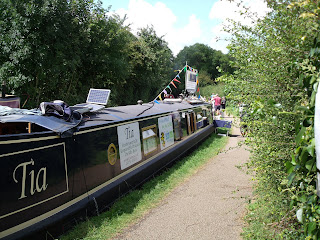 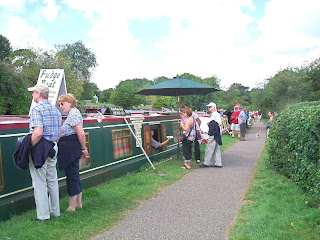 The Fudge boat above and the Cheese boat below both handing out samples and hopefully making sales. 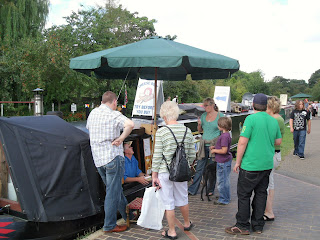 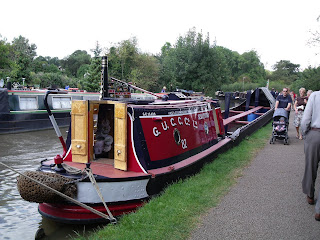 NB Sculptor built 1935 it`s wooden bottom now needing urgent repair was used in WWII as a fire boat in London but spent most of it`s life carrying cargo between London and Birmingham.
All day Saturday a steady stream of people got to see the living quarters of a working boat family and what you see in the pic is it, about 8 feet long. 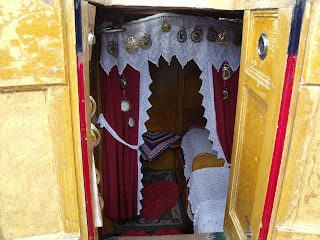 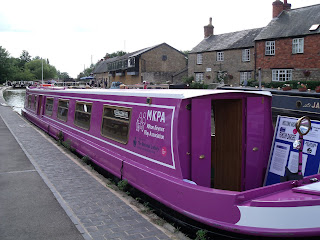 Above the Milton Keynes Play Association boat` Funion Bargee` was on hand to keep the kids amused both on board and on shore. Below the only usual fitting is the galley at the rear the rest is just a play area. 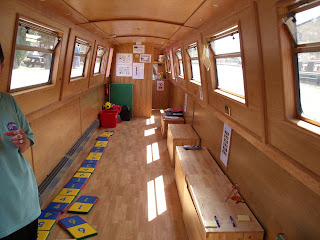 If anyone missed the w`end celebrations the next event is "Village at war" Oct. 3-4th follow link to the left of the page.
Posted by Les Biggs at Wednesday, August 26, 2009