Turning right at Gt. Haywood brings us onto the Staffordshire & Worcestershire Canal. The canal opened in 1772 and was designed by James Brindley. His aim was to link the ports of Hull,Liverpool & Bristol using the rivers Mersey, Trent & Severn.
His vision came about with the completion of the Trent&Mersey canal but by then he had died.
After less than a mile from the jct. the canal arrives at a very large expace of water called Tixall 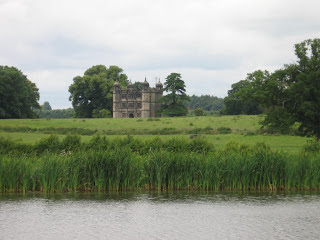 Wide and in this case you get what it says on the tin WIDE. It came about when the canal was built past Tixall Hall and the owners wanted their land to run down to a lake and not a canal.
The Hall was demolished in 1927 and all that remains is the Tixall Gatehouse built 1580 and still standing. Mary Queen of Scots was imprisoned here for 2 weeks in 1596 but nowadays it is owned by the Landmark Trust who buy up old buildings like the gatehouse and use them as holiday lets. The Gatehouse has 2 en-suite bedrooms and 2 tower bedrooms and can sleep 6.
Well sitting here the heavens have opened again and i can`t help thinking that a year ago it was really hot all July. Well the intention was to go down to Gloucester via the R. Severn but so much rain has fallen the river keeps flooding and passage has been stopped until levels drop.
The river was open again for a brief spell but with more rain falling in Wales it was soon shut again so perhaps it might be a good idea to change direction as we don`t want to risk getting stuck waiting for the water to go down. Still always another year and plenty more to do this year so maybe give it a miss for now.