On down the Staffs&Worc` to Weeping Cross where at Radford Bank on bridge 98 a carvery can be yours for £3.50 upto about 6pm on through Acton Trussell arriving at Penkridge that was home for a week while Andy went south on the train to see family. Nice little place Penkridge with plenty of shops and a twice weekly large market. On a Wednesday as well as the market there is an auction of furniture and farm bits and well all sorts. Outside the auction room live chickens, ducks, geese and eggs of all sorts not just chickens are auctioned also fruits. 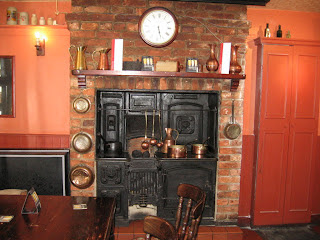 On the way back from market canalside is the Boat pub with a wonderful cooking range which apart from the surrounding brickwork is original.
Moving on after that all important task of filling the water tank and emptying the loo the M6 having passed over the canal some 3 miles back now runs alongside the canal for 1/2 mile before 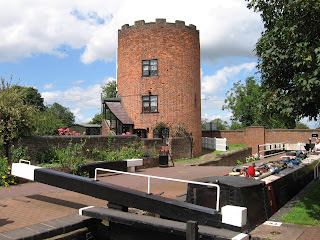 the canal swings west and we arrive at Gailey. The tower here lockside looks as though it was part of some long demolished castle but was in fact built by the canal company so the toll collecter had a good view in both directions of approaching boats. The toll on coal was high as this was the main cargoe and therefor gave the canal co bigger profits.
The tower is now a gift shop and the lady runnig it lives upstairs.
At this point the A5 passes over the canal and was first used by the Celts. Then the Romans improved it for their use before Thomas Telford used it as a turnpike and charged a toll. Cargoes came in and out by road to be transhipped to canal boats. 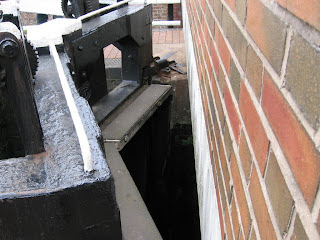 You see above the lockgates next to the road bridge with just enough room to cross for locking but not enough for the normal straight lockbeams, i say normal but these L shaped beams are quite common on gates near bridges all over the system.
Had a nice surprise when 2 good friends in the form of Sue and Vic on their boat `No Problem` (link up on the right) stopped by on their way to getting their new cratch and wimp cover fitted. Haven`t seen each other since Braunston last year.
Now Sue/Vic were my first boating friends and in fact i met them before i even had a boat when after a few e mails asking god knows how many questions they invited me aboard at Bedford back in 2005. Thanks guys, and as a lot of boaters out there know you are real nice peepes.
So a few beers on No Problem and a gossip was a great evening.Till our paths cross again be safe.