ANCHOR AWAY or maybe not at the moment

Well the intention was to go down to Stourport and then on to the River Severn down to Gloucester but as you all know from the news coverage anywhere near rivers is a no go. I know i need water to keep my home afloat but just like those poor people whose homes have flooded i only want it on the outside. When is this all going to stop. So having gone so far we decided the best thing was to turn around and head back to Gt. Haywood and south on the Trent &Mersey. 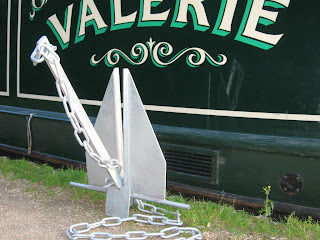 The anchor i bought for the R. Severn trip is now stowed away perhaps not to be used untill next year, still i shall need one sometime so it`s not wasted money.
Down through Rugeley passing this old building dating back some 150yrs and i believe was a mill. Wonder what will become of it after its current use as a car repair yard, housing maybe?
I saw a site recently that was being demolished and the contractor said the canalside small warehouse was going to become flats and the rest of the site houses so maybe a preservation order here and there is no bad thing. 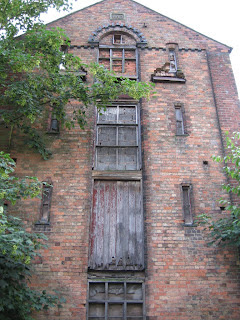 Don`t think anyone will be to bothered if this lot below escapes preservation, it`s Rugeley power 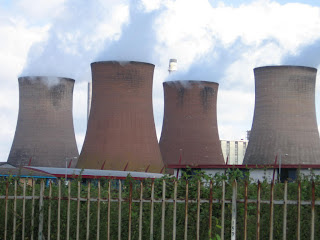 station. So south we head as we are also prevented from going to Burton on Trent because of the River Trents intrusion at Alrewas has caused flooding. Shame really because i wanted to go down through Leicester where one of my boys is farming.
Anyway no real plans at the moment just see how it goes and that`s what this retirement life is all about , no plans, no rush, no worries.

Hi Les, Glad your safe. No Problem is up there. Have read some blogs of boaters caught in the floods. Not nice with locks under the water. The worst we got near Braunston was tight ropes as we went up a foot.
Chas n Ann

Hi Chas/Ann
Yes thanks quite safe, thuoght it best to stay away from the rivers after all can always do them another time.
Nice hearing from you and hope we meet again sometime.