The Willow that will weep no more.

This is Rugby and as boaters would describe it, the little park on the offside by the Tesco moorings. Not a normal mooring for us being absolutely full of boats on both sides but Jaq needed to be here for a couple of nights. So I find myself with a whole day to fill I have spent the time going off and with great success tracing another section of the original Nth Oxford canal route. Would have been better getting on with the boat painting but I promised to have no more exercise than a walk.
Off walking I came across the tree surgeons further along on the offside cutting down an Ash tree. They were quite happy to let me have some but not willing to leave it until we pass by tomorrow. Council policy the site has to be left clear. So arriving back at the boat I was just in time to capture the action. 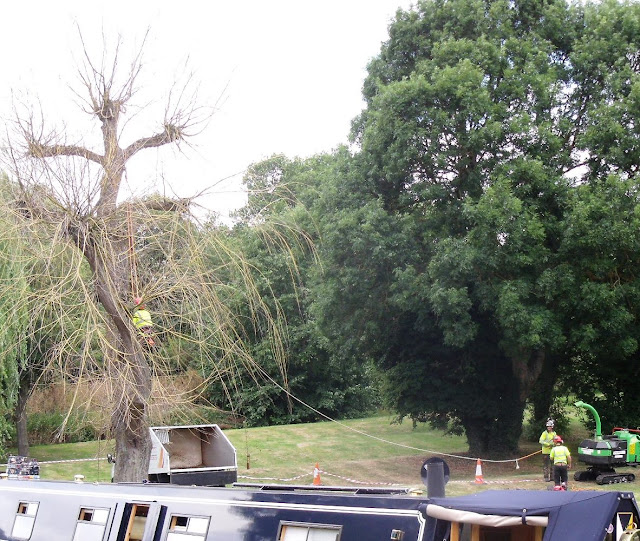 The ropes are being attached to the highest point in the tree. 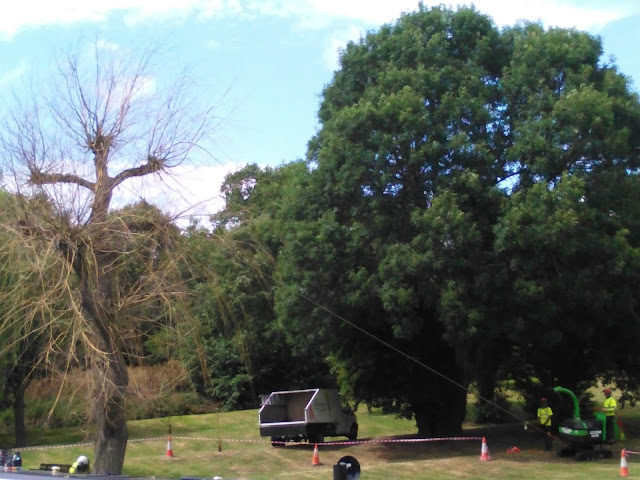 The rope is pulled taunt by the movable shredder. Watch the trees behind on skyline. 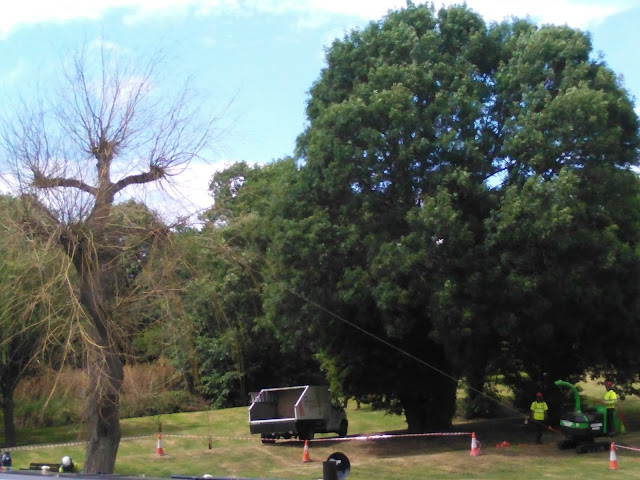 The guy at the tree base is cutting through with a chainsaw. The tree has moved slightly. 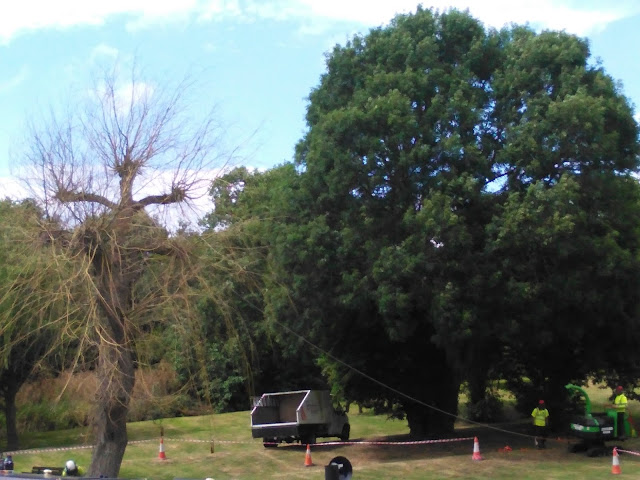 Watch the skyline. It has moved a lot. The rope is slack. 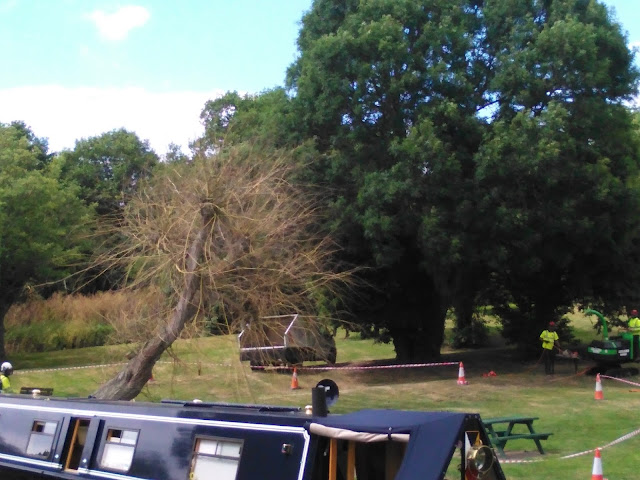 Nothing more to say, I think we all agree it`s moved. 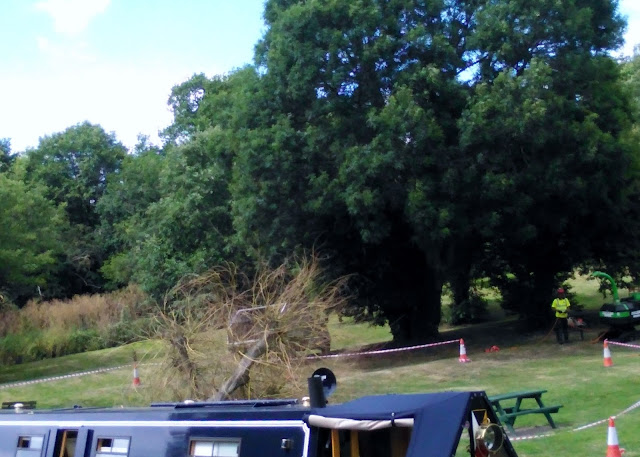 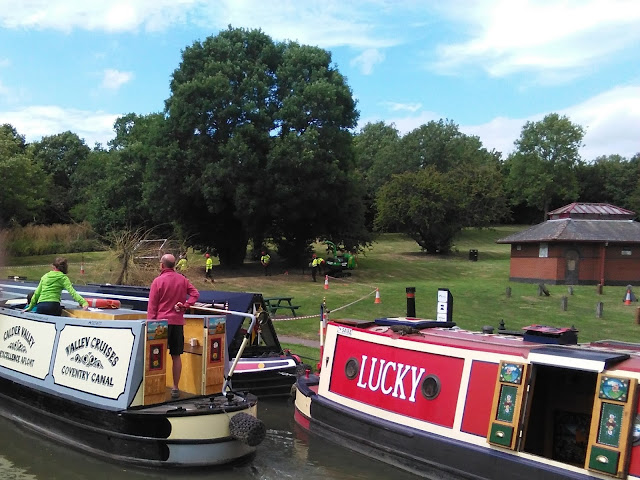 Excitement over and life resumes on the Warwickshire canals. 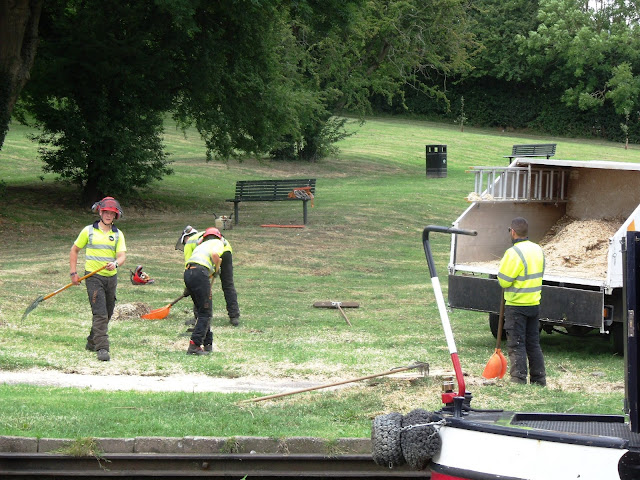 Within 2 hours it had gone.

Having been in the business here, we dismantle/remove trees differently.
Basically have one person climb the tree with chainsaw in hand, and a safety harness, usually as high as is possible. The upper limbs are cut off from the top down so to speak. Workers on the ground drag the limbs
to the shredder and if the limbs are over 5 inches in diameter, the limbs are pruned and left where they fall.
The person doing the climbing will come down and assit the other three on the groundt chopping the large limbs into managable pieces. hose limbs are usually stacked at
the edge of the property if it is residential or carted away for sale to others.

Then the remaining trunk can either be dropped or if in a tightly spaced area, he'll climb to the top with chainsaw and rope and tie the rope to the top of the tree and then cut off maybe four to six feet of the tree, and it gets pulled down to hit the ground with a thump. This continues until the tree is gone, leaving the stump. Later another person using a powered six inch diameter blade grind the stump in the ground back and forth across the stump, first north-south then east-west, and this process goes down two feet into the stump.. Then the sawdust from the stump, is collected and carted away. Where the stump was is filled with soil and the balance of the tree, underground is allowed to rot.

Hi Bryce
I have seen that method used on tall trees. This one was about forty feet so they probably thought easidr to deal with on ground.
Les