Just have to face it this journey is going to be lock after lock all the way to Birmingham. The next group are the ten locks at Stockton leading down to Long Itchington. 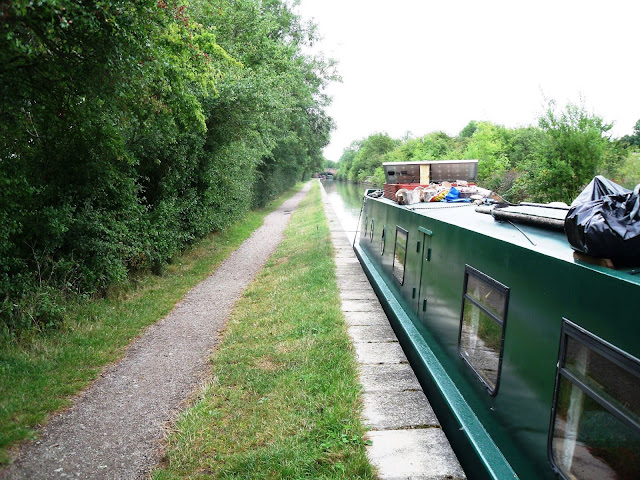 Plenty of empty space if you pass the pub and just go under the farmers bridge that can be seen in the distance. A handy footpath from the bridge goes into the village. 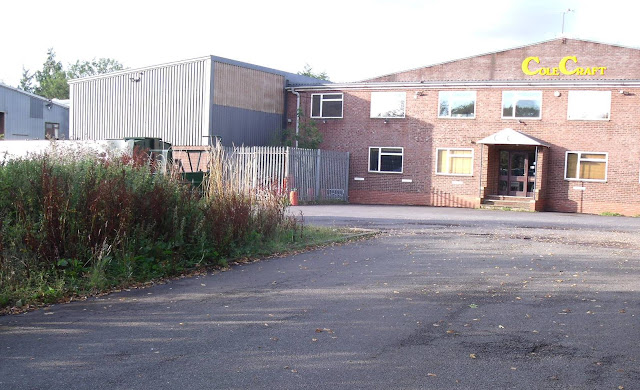 Long Itch, as it`s known locally, is a truly boaty village being home to ColeCraft shell builders. One of three finished shells can just be seen to the left. 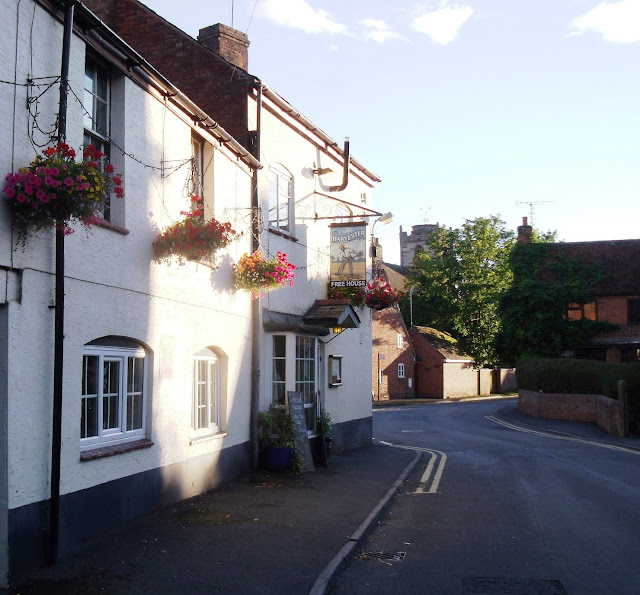 The last of the day`s sun is shining on the Harvester as we arrived for a meal. 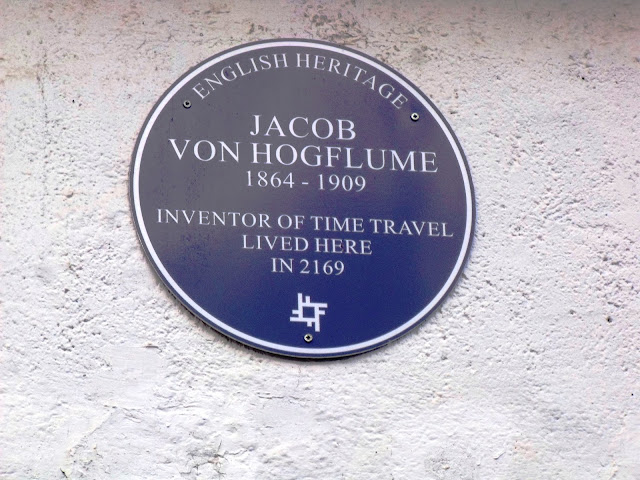 Need to come back in a few years to check this out. 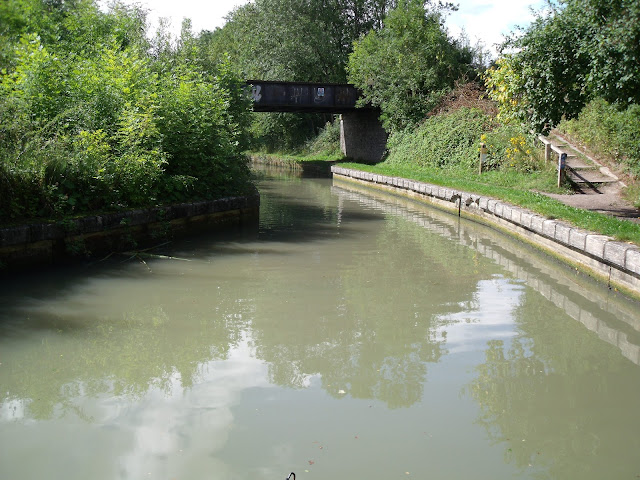 Leaving the moorings just a short distance brings us here. Not very wide but we know wide beams can get through. Now confession time. It was not until I started typing below the pictures that I scrolled to this one above and realised why it was narrow. Can you spot the clue? 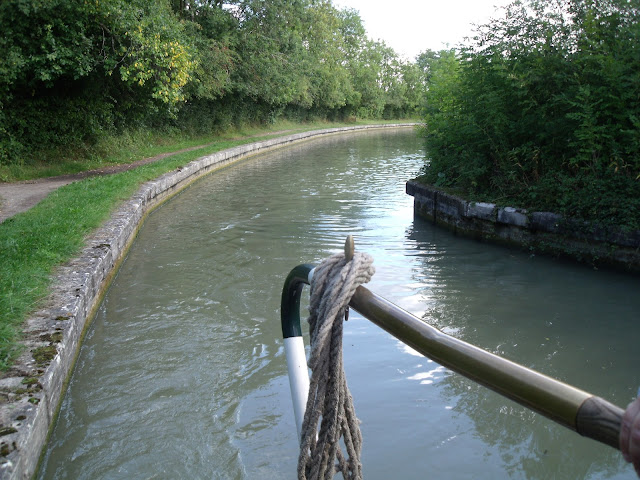 Another clue here that I found once the previous clue became obvious to yours truly. 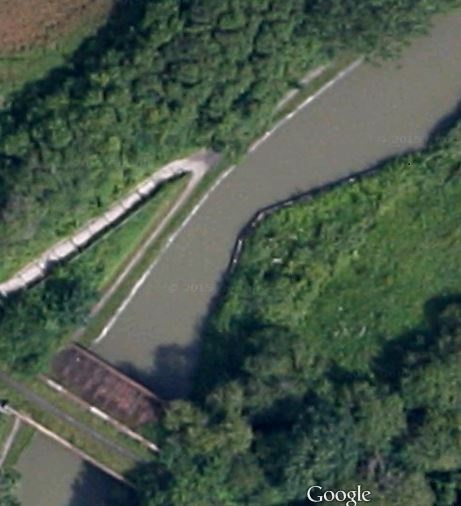 An overhead view of the narrows. I think they could have picked a better spot and not created a blind corner. 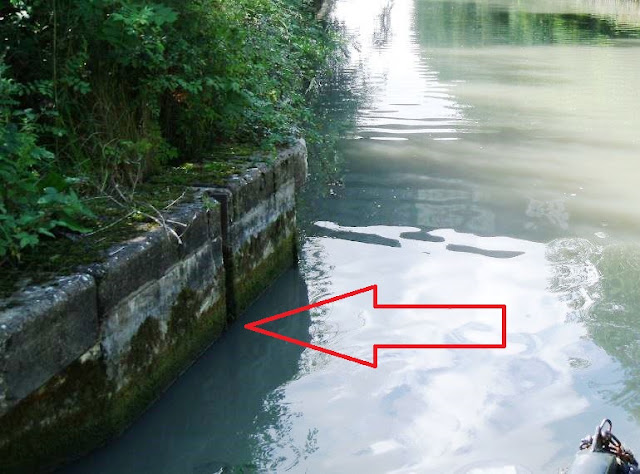 Here is the clue a slot for stop planks in case of a breach in the canal banks. In the first picture of the narrows you can see the slot on the tow-path side. This example shows planks being used on a narrow canal. Same principal, but shorter planks in use. 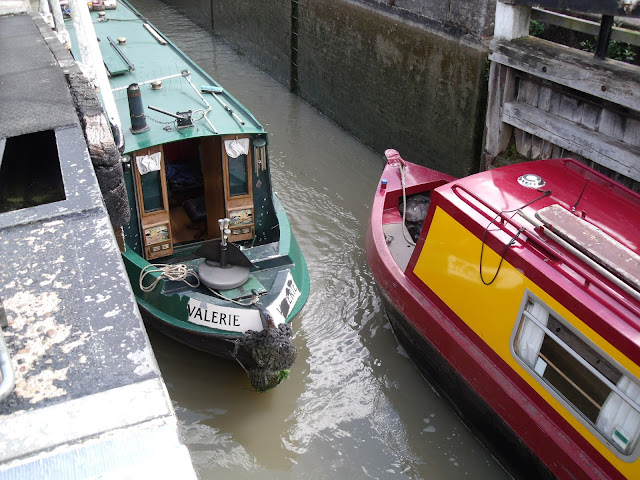 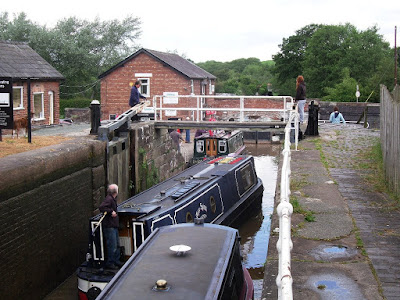 Further along we had to lock down through Bascote staircase locks. Not a very clear picture for those not familiar with this type of lock. Basically it`s two locks divided by one set of gates. Jaq has left her lock and the hire boat has left his. Both are passing the dividing gates and will after the gates are shut fill or empty their lock and go on their way. This manoeuvre is only possible with two or three boats. In this case the two boats just swop locks. For non boating readers here and abroad, imagine there was a boat alongside Nb Valerie. The hire boat holds it`s position. The boat alongside Valerie would move forward across her bow and occupy the space alongside the hire boat. Hire boat enters and Valerie does the same crossover but past the stern.  In the picture above two boats in one direction and one boat in the other.
A normal manoeuvre but the good thing was the hire boat suggested the move before I had a chance to ask him if he was ok to do it. Lesson learnt fellow boaters, treat hire boaters with respect as they are not all first timers.

Lovely to see you guys on the move! Long Itchington is lovely, isn't it? We enjoyed walking into the village across the fields.
Biggs hugs, Mx

Found your location on google; the two parallel bridges, one was for a now abandoned railway track. No doubt a
victim of the Beeching cuts all too many years previously.
If one had followed the path in white of Google uou would have found Basscote Road, correct?
And further along Warwichsire Fly Boats with a short arm home to a number of narrowboats extending roughly south.

And the series of locks mentioned, I count six or seven on Google.

Now here's the odd thing. Do you both recall my comment about Blogger and the redirection to another page, not part of the Blog?

This reply is on another page entirely!

Have included the URL below just in case somebody else has a similar situation.

Have no idea if this messagewill arrive at NB Valerie.

Hi Marylin
Shame your stay on the canals will to soon be over. As always we look forward to your next season.
Yep some lovely walks to villages all along the canals.
Lesxx

Hi Bryce
The Warwickshire fly boats arm is called Kayes Arm and it led to the quarry.
The locks are part of the Stockton flight into Long Itchington.
Your comment is on the Long Itchington post of August 31st. Everything is showing correct as I look at it. You say your reply is on another page, which page?
The railway bridge is the one featured in Long Itch post not sure where the other is as the bridge back is quite a way. Perhaps you mean the bridge leading into the village and the other quite close that has no road as it is for the farmers use.
Keep asking Bryce, always good to help a friend understand this land Jaq and I live in.
Les