I have now got a new date for the surgery, April 29th. Hopefully they will have a bed and with just a 24/48 hour stay we could be off cruising soon after.

As Jaq mentioned in her blog post  I have used the time to get the solar panels located in the new log box. Still not finished but time is plentiful in this boating life and why work yourself silly. So some before and after pictures of the project so far. 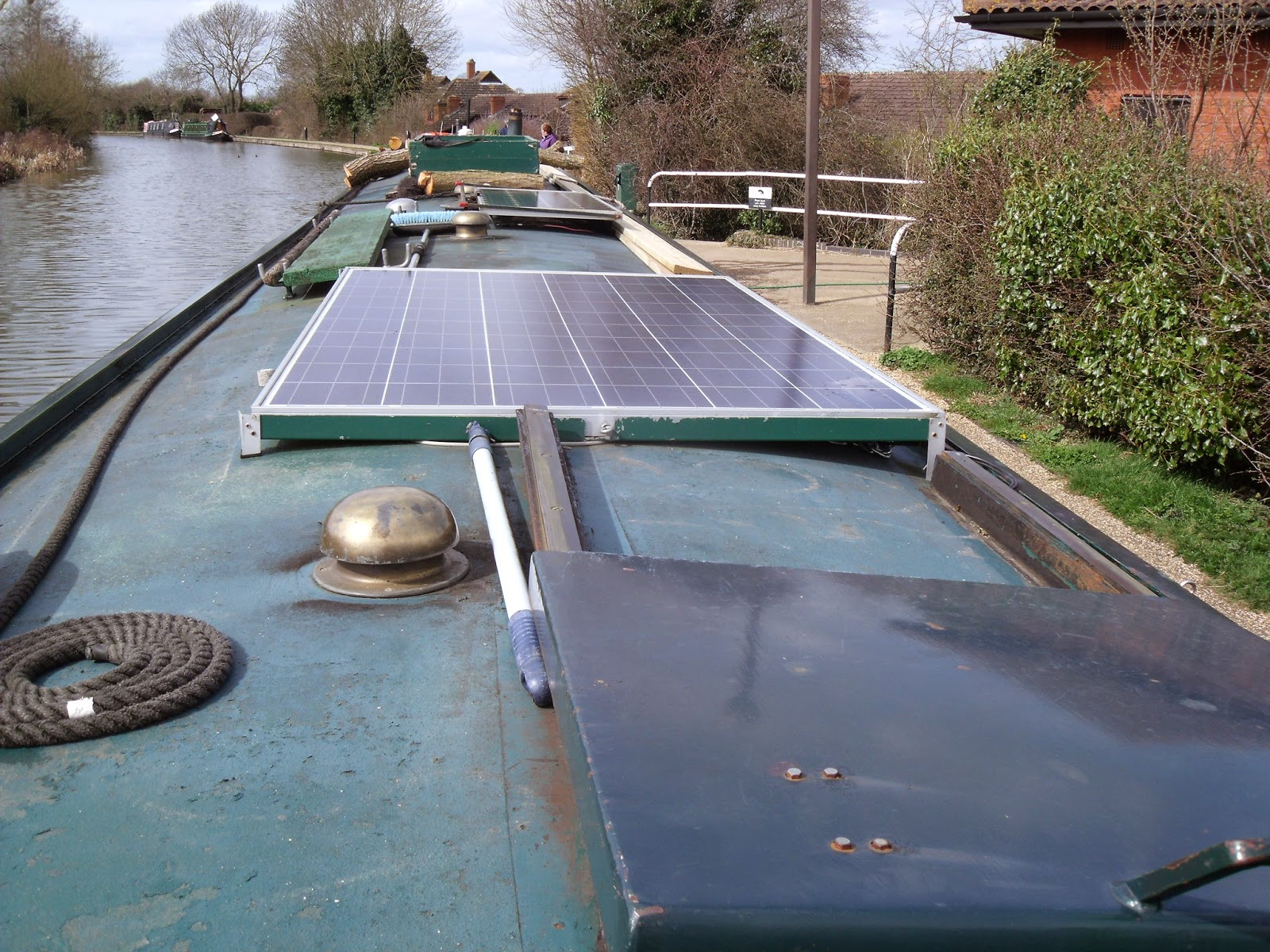 Looking down the roof as it was the two solar panels are fixed to the roof. Further forward the original log box. 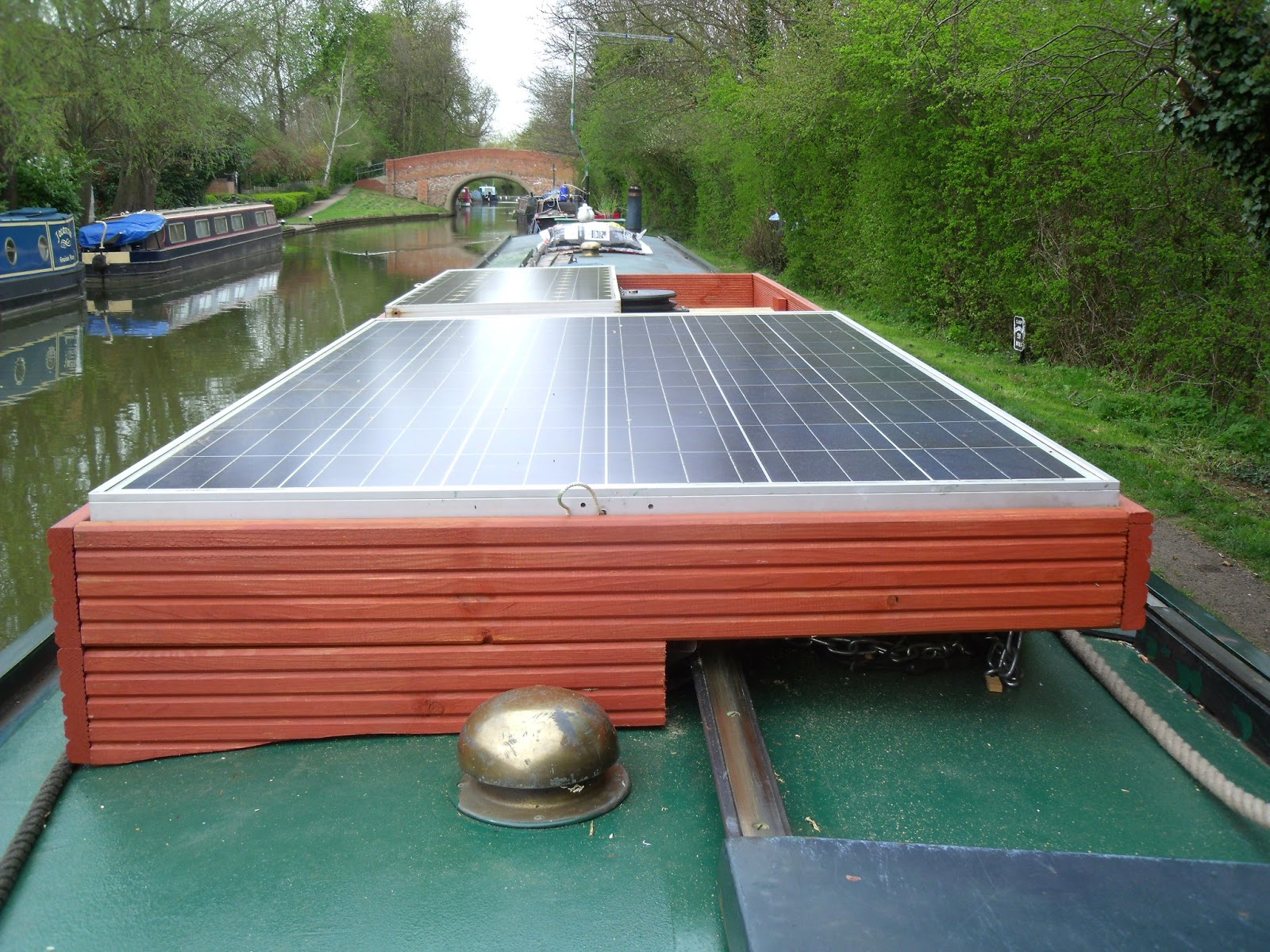 Now we have the panels set into the new log box. Jaq likes that she can now see up ahead more clearly when she is on the tiller. Notice the chimney in both pics to see what she means. With the coal sacks moved back it will be even better. 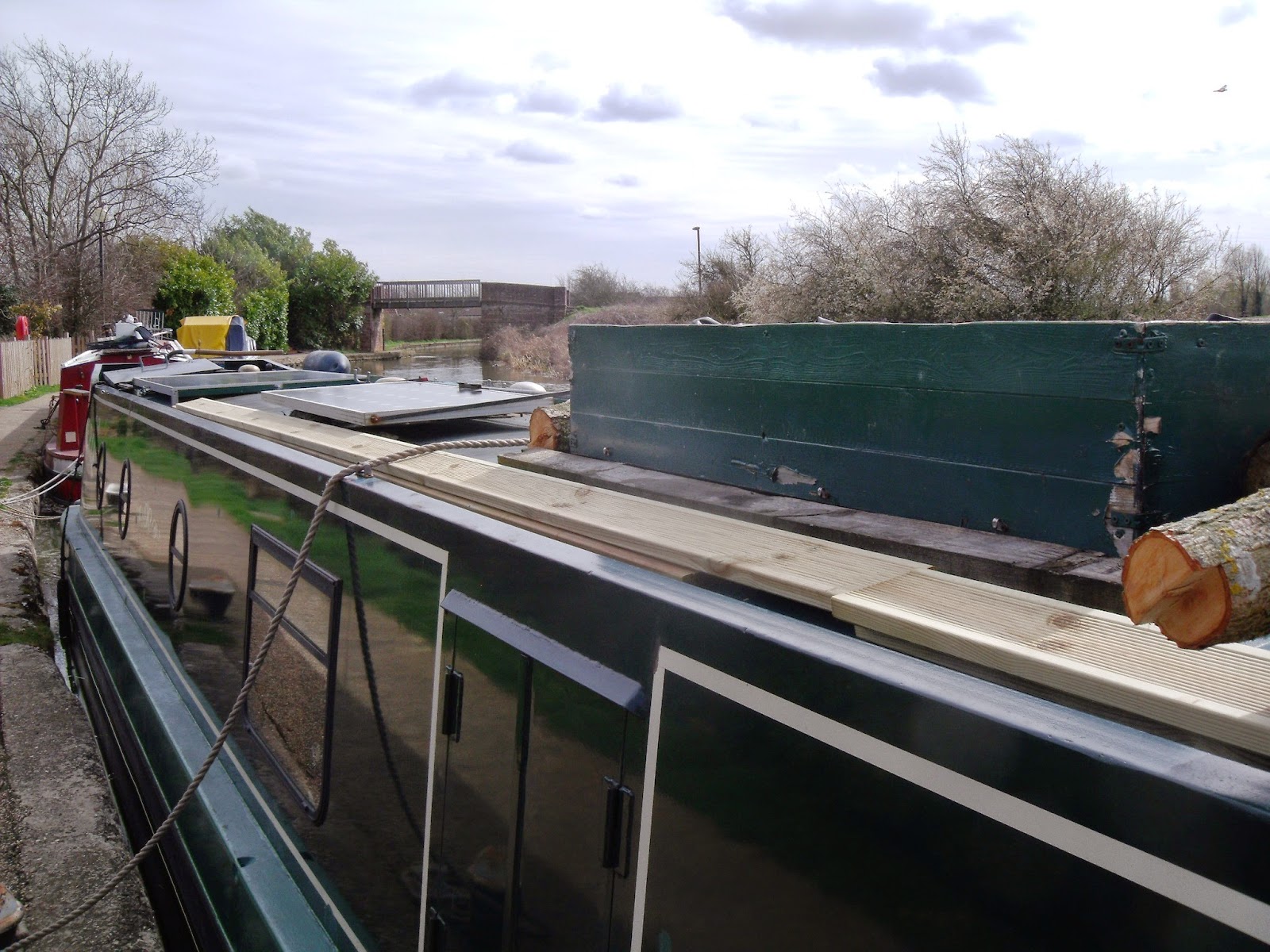 In this original shot you can see the roof space was very congested. 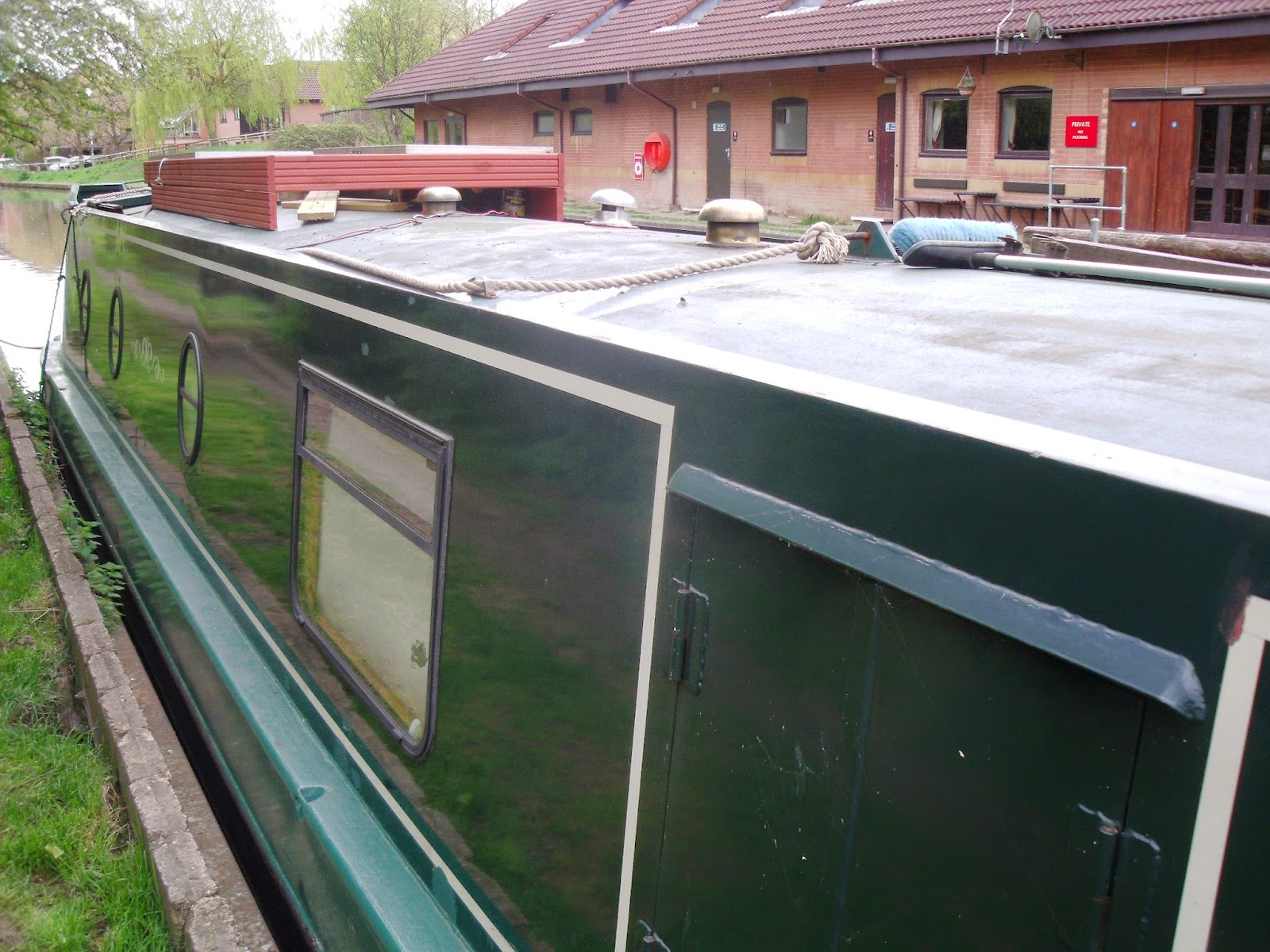 The small solar panel was in between the two Brass roof vents and the old log box was on the right where the brush is lying. We have gained 14 feet of roof space and have doubled the log storage space. Jaq has plans to start a vegetable garden using grow bags. 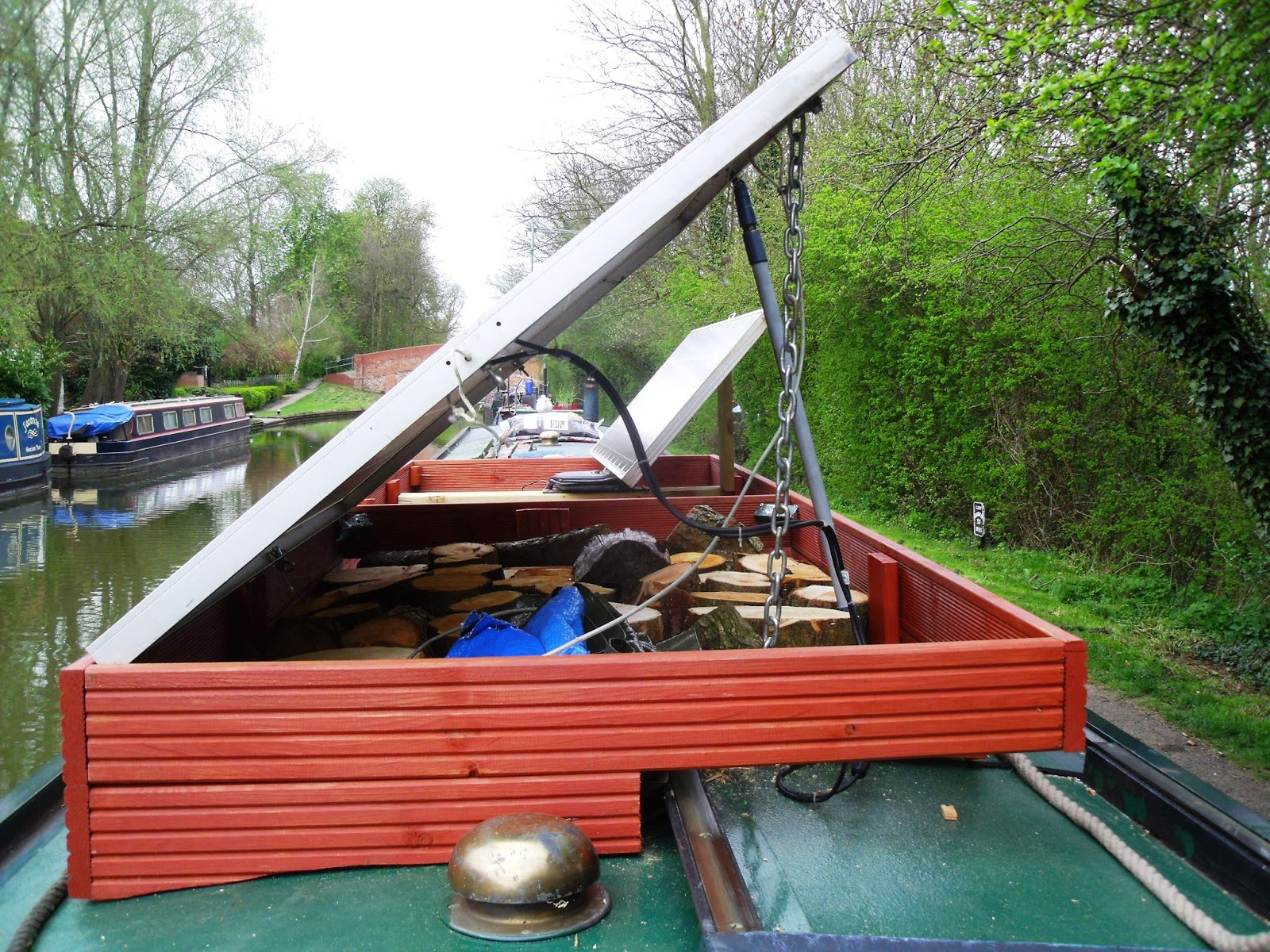 As before the large panel tips in four directions. The hatch now slides under the corner of the box. 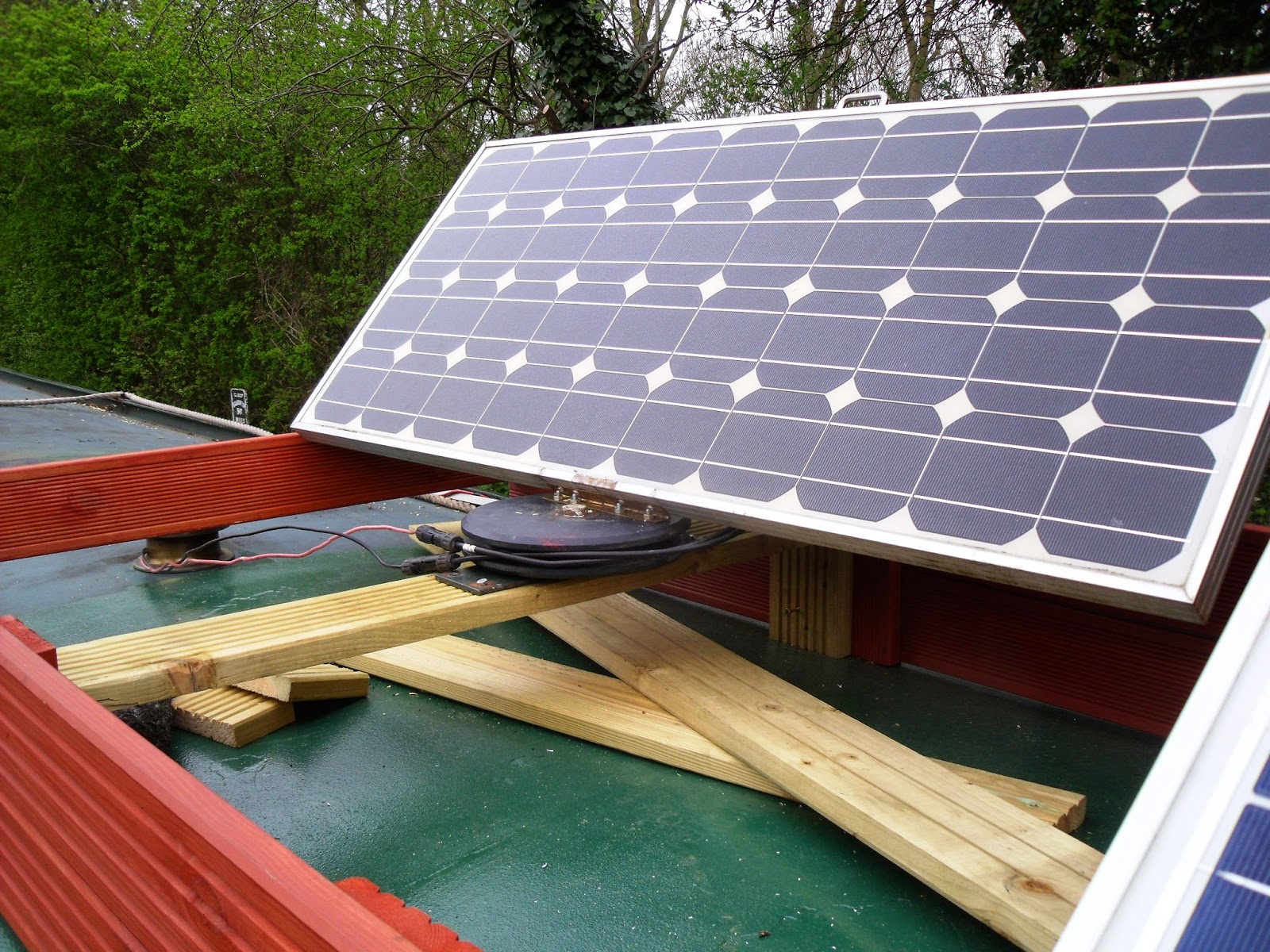 This is the section of the project that needs finishing. The panel swivels and tilts just as before. As the panel doesn`t completely cover the box i`ll make a lift out lid to keep the logs dry. 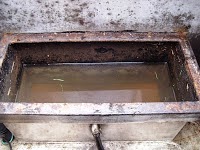 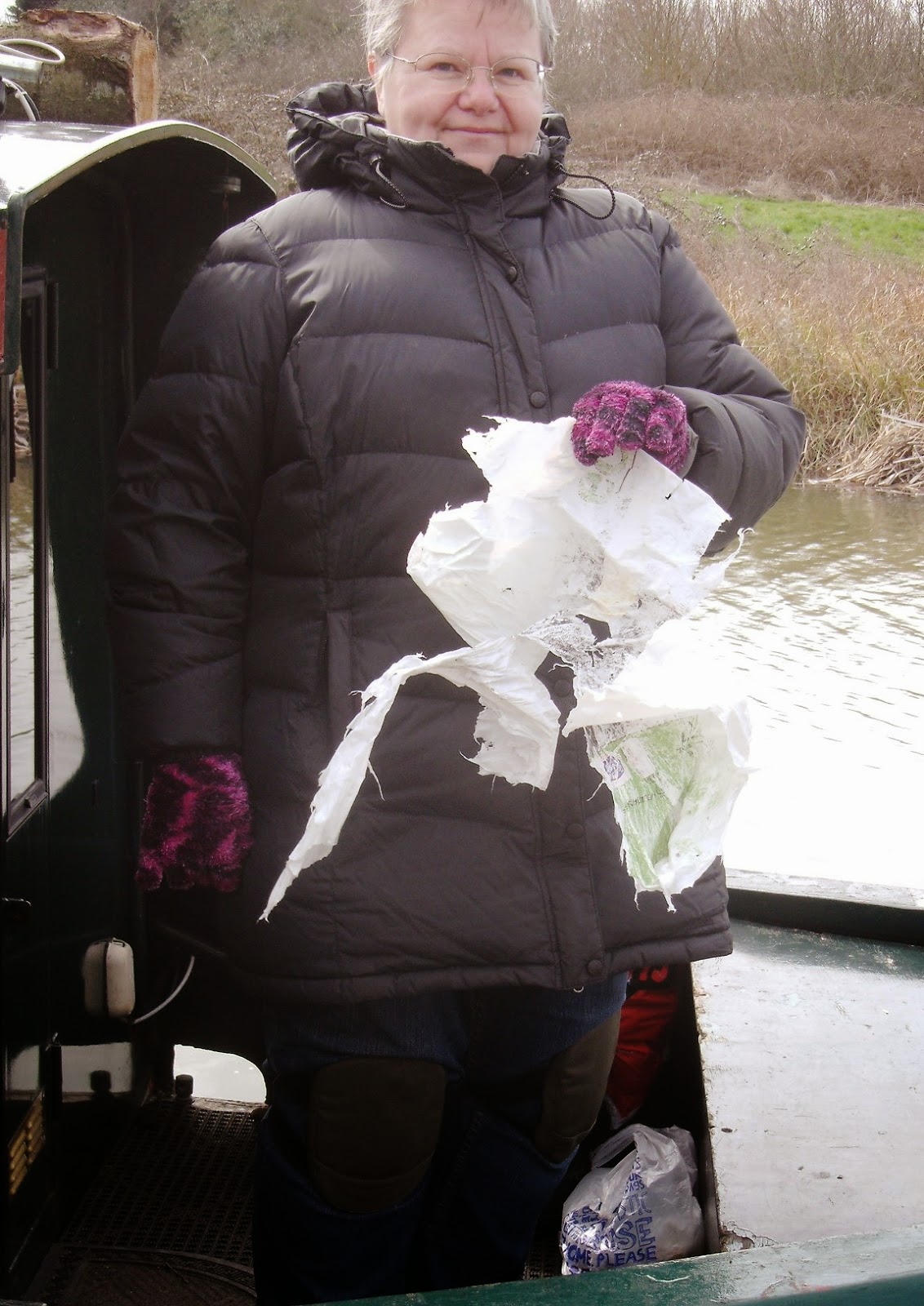 Propellers do pick up rubbish now and again but this time Jaq decided it was time for her to learn a new skill. She climbed down into the engine bay and released the cover to the weed hatch just above the prop. Down her arm went into the murky depths and found a thick clump of plastic entangled on the prop.

We do hope all goes as planned this time! We will have our fingers and toes crossed on the 29th. If Jaq can stick her hand down in that murky water she can handle anything.
Sally xx

Although the subject in hand is not good that's the first decent had-on shot I have seen of Jaq!
As for the box project on the roof, maybe Les could start a business building these for others?
He certainly has the wherewithall.

Well, who's a clever boy then, Mr Biggs! I'm very impressed with the design and the construction - fancy building it so the hatch slides under it!! Champion, mate! I also like the fact that Jaq can see better over the roof of the boat now - for us properly sized women visibility is a problem at times. I of course, have a bright red stool for standing on ...
Jaq, instead of grow bags which will most likely be full of chemicals to make the veges grow, how about getting some long plastic pots/troughs and then you can find some organic compost/potting mix. Another benefit is they can sit slightly proud of the roof and won't trap water. I put stones from beside the cut in ours last year (to weigh them down - David washed them off and kept them when we winterised the boat, bless him) and will do the same this season as well as putting in some vege scraps and sticks to create more composting material.
One month and a day till we are back on the boat, less than 3 weeks till we leave for the UK ... xxoo

Thanks Sally! I was cursing the boat builder because it is a VERY tight fit to lift the extremely heavy lid off the weed hatch. YOu know how it is--things designed for men work for men, but things designed with a woman in mind work for everyone! I felt like Alice going down the rabbit hole!
JaqXX

Hi Bryce,
Thanks mate. I don't like having my picture taken which is why I hardly ever show up on the blog.
JaqXX

Hi Marilyn,
I agree wholeheartedly with you about Les' amazing skills. I love watching him work out a new project in his head and make it appear in three dimensions.

I will check into the grow bags and see if there is another friendlier alternative.
JaqXX

Hi Jaq and Les
Wow. Les is cracking on with the DIY! Hope all goes well for the 29th Les. We are broken down at lock 74 at Hungerford on our journey to our new marina in Tewkesbury. Canal rescue has just arrived so hope we will be onward bound tomorrow. Loved the outcome from the CRT. You are SO organised Jaq with the diaries etc. I can't even lift the weed hatch so well done to you. Take care
Carolyn. NB:Carapace