Forth and Back: What We've Been Up To Here and There

"Life is a series of pulls back and forth. You want to so one thing, but you are bound to do something else. Something hurts you, yet you know it shouldn't. You take certain things for granted even when you know you should never take anything for granted.  A tension of opposites, like a pull on a rubber band; and most of us live somewhere in the middle. " ~Mitch Albom, Author of Tuesdays with Morrie

This is a mostly pictorial blog. I hope to do a more in-depth post about Old Linford Manor another time. We've spent a shade over three weeks waiting to hear about Les' upcoming RFA procedure. Knowing we couldn't just take off and cruise northward as we wanted--as we had planned--we've been staying 6-8 days at a stretch, turning for services, and cruising back to moor somewhere for another 6 day stretch. Les and I both get itchy feet after four days somewhere, so this has been an interesting change for us.
We've been back and forth from Fenny Stratford to Stantonbury and points in between, passing through Milton Keynes, stopping for a couple of days at Linford Manor Park, turning to get water and dump our rubbish, pick up groceries, turning again to moor somewhere with bus service allowing Les to travel to Luton to pick up our mail, purchase decking boards and other bits and bobs for projects, hunkering down for days at a time waiting out rains squalls and high winds; all the while keeping busy while waiting to hear from the Royal Free Hospital. 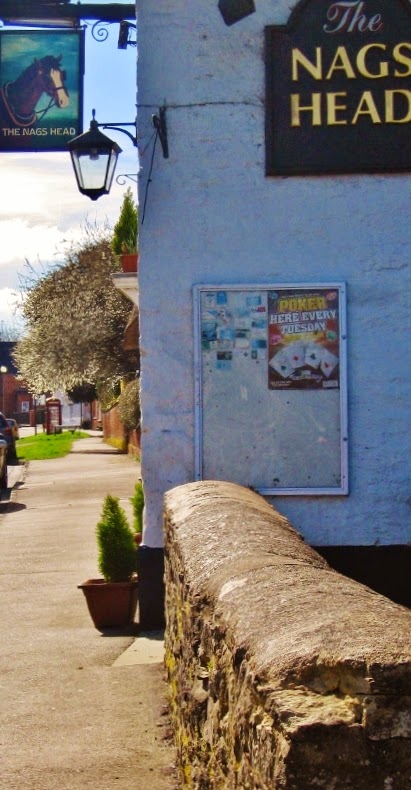 I love the composition of this picture which includes the old stone wall, the ancient pub's sign, and a bright red phone box in the distance.
Many layers of history are in evidence and it is easy to lose one's self in it--like diving into a layer cake!


As we made our way back from Old Lindford Park to Fenny Stratford, we stopped at Gifford Park to fill up with H2O, dump our rubbish and pick up a Saturday paper.  This AMAZING wide beam was on the 14 day moorings... 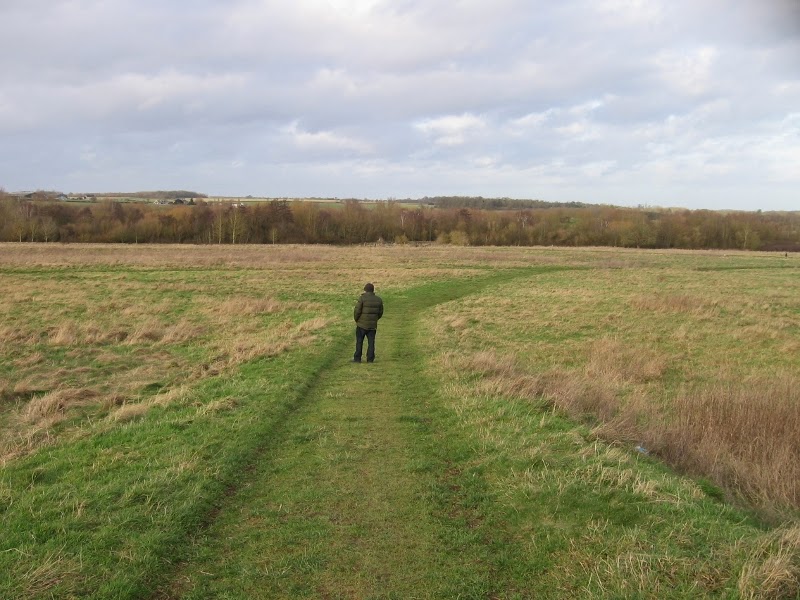 Above Les stands looking out across the field in which the ruins sit, off to his right. Previously we have only stayed three or four days here and we didn't do much investigating of the local area beyond our boat. With time on our hands we walked much farther afield and discovered the path past the church ruins continues forward with the River Great Ouse on the left and Linford Great Lakes off to the right.
The lakes were created after gravel pits were dug out in past decades. There are a string of almost a dozen lakes--two of which are held in a 91 acre parcel just adjacent to Viscount Althorp's field and belonging to Hanson Environmental Study Centre. One can enjoy the views of the lakes and the wildlife from the footpath we followed, or one can join the HESC and gain access to its grounds which include paths through woodland around the lakes and several bird hides from which splendid views may be had. As we walked along the path a green woodpecker landed on a nearby stump with an insect in its mouth. It rested there for several minutes while we stared in awe and misery as we hadn't brought our cameras with us.
We were absolutely gobsmacked to turn around on the path and see with our very own eyes--a small island just off from shore, carpeted by trees and in those trees were no less than twenty pairs of nesting Herons accompanied by a nesting pair of white Egrets!! I tell you now that if either Irene Jamieson or Jo Lodge had been there with their mighty cameras and spectacular abilities to frame a shot, they would easily have taken a £1000.00 picture.
As we continued around the lake we spotted over fifteen Cormorants, countless different kinds of ducks, geese, Terns and off in the distance on the brow of a farmer's field we spotted a dozen or so pairs of nesting swans. We also saw three barn owl nesting boxes.
We hiked in between the two lakes, climbed a fence and found ourselves at the doorstep of the HESC. It was locked up tight so we walked up the road to the Black Horse Pub and back down the towpath to NBV for a 3 mile hike.
As Easter weekend bore down upon us, our quiet stretch of countryside quickly filled to the brim with boaters and soon we were nut to butt with other folks seeking to enjoy a slice of nature on their four day weekend.
We were also entertained by hundreds--and I do mean hundreds--of boats coming and going in a frenzy all four days. From the way boats were piloted and the livery on them I spotted: small day boats loaded with family and friends whizzing by at top speed, hire boaters--mostly from Canal Boat Club and Wyvern Shipping Co. Ltd.
Many of these folks wore the broad smiles and  "fake-it-till-you-make-it" glazed eyes of boating newbies as they plowed around the bend in the canal beyond us without slowing down-only to meet a wide beam creeping out of the curve aimed directly at them. Hire boats turned up in a row, stacking up behind one another like five o'clock traffic, not slowing down until they were right on top of the boat in front of the boat in front of the boat in front who was dueling for right of way with another wide beam!
We also witnessed a few shiny boats out with their no nonsense attitude of "It's my holiday and I've paid to use this slice of canal so get out of my bloody way!"  We saw beautiful Share ownership boats thoughtfully and carefully piloted, tatty live aboard vessels looking like floating rubbish bins, and everything in between. We smiled and waved to many folks who slowed down, passed politely and were obviously thrilled down to their socks to be out on a boat pootling up a canal on a four day weekend.
Of course the towpath was not devoid of action either. Swarms of joggers, dog walkers in the several dozens, bicyclists--oh everyone and their mother's brother's sister's cousin's kids were out and about. Thank the Goddess for the end of the holiday and for our lives aboard every day. We are so incredibly lucky we don't have to turn in the keys at the weekend, trudge back to the car, battle traffic and head to a house for another week in the rat race.
While pandelerium reigned on the water, Les and I enjoyed evening walks up to the old farm bridge over the canal and waited for the gloaming to fall and bring with it barn owls quartering across the fields, hunting for dinner. Watching these beautiful birds fly on silent wings, dip, dive and come up again with a mouse is magical.
Too keep ourselves busy we worked on our new large wood box. Les picked up the deck boards in Fenny Stratford, I chose the stain color, and Les took my inquiry as to whether we could move or small wood box to the back of the roof and reinterpreted it into a brilliant large box upon which both of our solar panels will be mounted sometime soon. My baby does beautiful work!!!
The phone rang suddenly on Thursday, April 9th. It was someone from the RFH to say Les' procedure is scheduled for Tuesday April 14th, with pre-op check in and overnight stay on Monday the 13th. We packed up, cleaned up, and headed back to Fenny Stratford where access to a train is easy. I will keep everyone posted as the week unfolds.
Posted by Mrs. Jaqueline Biggs at Monday, April 13, 2015

Perhaps one of your better postings. And spring has arrived. Although as with all things weather, that too shall change. April 11 & 12 the thermometer rose to plus double digits for the first time in over five months.
The angels are on your side, both of you for the April 14th procedure.

Love the mooring at Linford, beautiful in the spring sunshine. Blessings to you both.x

As I write this (early Tues am in NZ) you'll be in London. We are thinking of you both and sending virtual uploads of strength for the days ahead. Feel it coming in to your brains?
Loved the post, Jaq - your photos of the mooring at Gt Linford were a bit of a contrast to ours taken in summer, and you had, naturally, given your researcher bent;-), got much more info about the place than we did! Very interesting.
We couldn't wind at the hole before the bridge as there was a boat moored too close to allow our 62' to get around - had to go through the bridge and wind there.
Love the woodbox, by the way, and make sure you leave room for planter boxes for lettuces, herbs and tomatoes!
M&Dxoxox

Gt Linford, one of my all time favourite moorings we love it. We even liked it before we were boat owners, spent a weekend camping there on a bagpipe weekend. Listening to full highland bagpipes in that church were quite an experience I can tell you!
Every good luck for tomorrow, we will be thinking of you both tomorrow.
Kath (nb Herbie)

Thank you for all your lovely comments!
Jaq and LesXX