Stuck on our medical mooring in the marina there`s nothing like an Canal River Trust E. mail alert to get the blood pumping through a boater`s veins.

A tree has fallen down blocking the towpath and partially blocking navigation below Bridge 138, Grand Union Canal.
Boats please pass with caution.
The tree has fallen from third party's land so we are working with the land owner to resolve the issue soon as possible.
We will update this notice with further information when available.

As you can see no one is on site so we can only guess the householder is trying to arrange a tree surgeon.
For sure if I had come along and seen this the tree surgeon would have found the towpath clear when he arrived.
It`s not just the tree across the towpath that`s the problem. If you look closely the main trunk is leaning out and only the other trees have stopped it also falling across the canal. Narrowboats should get by ok but wide beams have to be aware it`s shallow to the left. 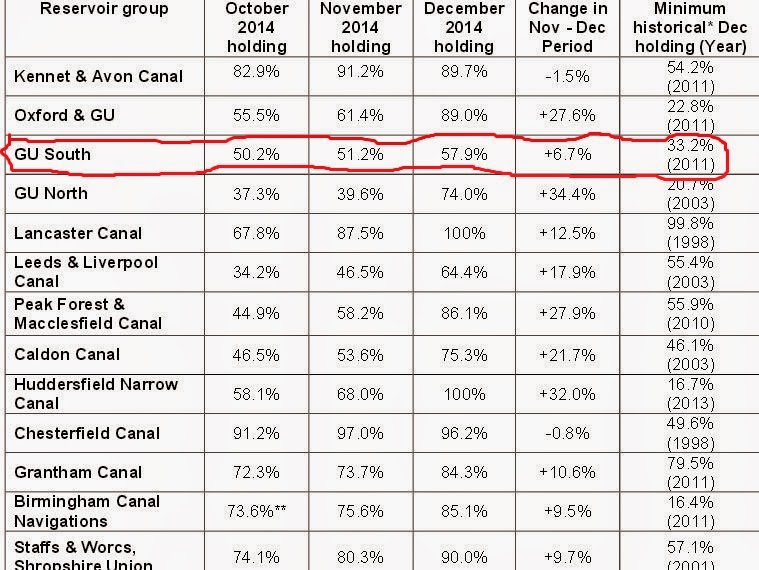 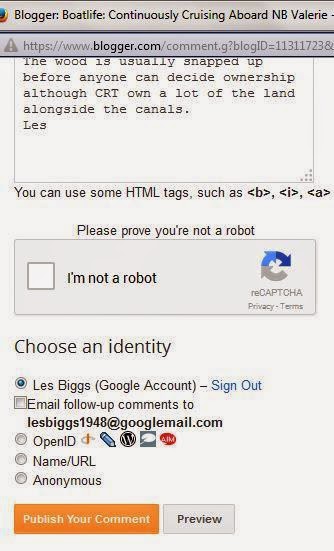 The reservoirs list above shows a big increase of 6.7% over the November figure to 57.9% in the holding here on the Grand Union south. A big difference to the same period in 2011 after a very dry year most of which Jaq and I missed as we spent a lot of time in the U.S. getting Jaq a visa etc. I guess with the amount of rain lately the figure will have increased in the January figures.
Reservoir watch site HERE.

The comments filtering system, on the left, seems to be working although as you can see when I answer comments it wants me to tick the `I`m not a robot box`. Sometimes it just lets me carry on after I tick the box but occasionally it asks me to type the numbers I see. Bloody cheek, it`s me blogger, surely you can tell I`m signed in and working. Oh well at least it is keeping the spam at bay.

Pleased to see you are keeping abreast of current affairs, Les...
Is the medical marina a bit like the rehab ward, do you think? Given the way you're moored, your bed is probably as close to the next bed as it would be in hospital, possibly closer, mate.
Your blog must be read heaps more than ours - we don't have the reCAPTCHA thing and we get no spam - sigh.
Only about 120 days till we're back on the boat - yay!! Being at home in the new house is too energetic with the garden makeover and the redecoration inside!
Love and hugs to you both, M&D xox

Hi Marilyn
I think your about right about the bed distance but it`s not a re-hab ward more like mental health ward.
Lesx
Hello David