The Vetus water lubricated cutlass bearing is fantastic when it doesn`t leak. The bit that leaks is the brass coloured piece with the prop shaft exiting on it`s way to the gearbox coupling. Within the unit are two rubber seals and all that`s needed by way of lubrication is some silicone grease.
The cutlass bearing receives water to cool it and any excess will pass up the black tube next to that Red valve and exit via the weed hatch. Trouble has been the water has been getting past the rubber seals and dripping excessively. 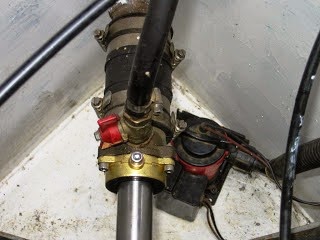 Many years back in 2007 I called out a Vetus engineer to fix the same problem. He had no explanation other than it had been fitted wrongly as to why it was leaking on an 18 month old boat. Anyway having watched him change the unit it was quite clear I could do it easily. So I made sure I kept the old unit and just purchased some new seals at just a few pounds per pair. The complete part from Vetus is £98 ($156).

Over the years I have changed the unit twice and done the job on a friends boat.
Previously removing the unit let water come in at a steady rate. Not a "we`re gonna sink" rate but about a half bucket full. This time I picked up a tip on the canal forum that said that tying of a piece of rag around the prop would slow the rate of water.
The trick worked and less than a cup of water came in at a fast drizzle.
So back in 2007 again in about 2011 and now today is not my idea of a decent system. The engine alignment can make the unit leak but mine is perfect with the prop shaft needing no guidance as I slide it back from within the weed hatch into the gearbox coupling.

Just something that needs attention before the surgery as I will be in no condition to do much for a few months.

Next job will be putting the glazing film over the insides of most of the windows to stop the condensation and help keep the warmth in over winter. Last year our friends Ken and Sue (Nb Cleddau) did the job while I was having the bowel cancer surgery.

Final job will be the wood stove that needs a new throat plate that should be on it`s way now.
We have fuel arriving in the form of diesel and coal via Juels fuel boat that is due on Tuesday. Hoping to find some more wood in the next few weeks but that is not a certainty so I can see our wood pile being depleted before winter ends as my wood cutting post op will be nil for quite a while.
Posted by Les Biggs at Sunday, October 12, 2014

Hi Les, I think it's time Jaq was given instructions on using the chainsaw - any good ol' Alaskan girl should be proficient with one, don't you think? Of course, unless you want your surgery done al fresco, it may pay for you to stand well back ...
Biggs hugs, M&D xox

Hi Marilyn,
Alaskan woman can do chainsaws but would rather leave it to manly British hubby!
Hugs to you both,
Les and JaqXX