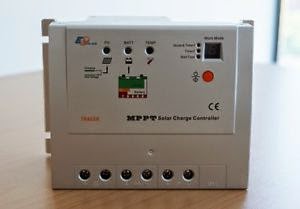 One of our solar panels the 240 watts is controlled by a Tracer 2215RN like the one pictured.
It doesn`t give a lot of info but just works away doing what it says on the tin-controlling the solar charge into the leisure batteries. Basically it tells you the panel is charging, the battery is not below a set voltage level and it has a temperature sensor.

It can be set to battery type being charged but all other functions are not really relevant to boats, they are timers for lighting or some other gadget you might want powered.
Now a useful extra is the remote MT5 meter that just plugs in. For perhaps almost two years I have just left the controller to do it`s thing but just recently while perusing E/Flea Bay I came across the MT5 priced at £16 ($25) from a Hong Kong supplier. The same thing here in the UK can be double the price. My thoughts and Jaq likes this Brit phrase."For 16 quid it`s worth a punt and if it all goes tits up it`s not the end of the world".

The readings the remote displays are the volts the panels produce, the battery voltage, amps going into batteries and State Of Charge as a percentage although I have my doubts as to the accuracy of the latter. All other readings are not of little benefit to boaters.
Earlier today 13 amps were going in the batteries from the 240watts panel.

So all in all worth the punt. Jaq says if any more man toys are fitted by the back steps we might need side doors to exit the boat. I must point out that she soon found space for her new ceramic frying pan.
Both items can be purchased direct from Hong Kong at a discount on UK prices but you might have to pay import duties. Another thing to remember is the expense of returning faulty goods but my £16 punt was worth it and no duty was payable.
Posted by Les Biggs at Tuesday, September 30, 2014

We bought both the Tracer and remote panel from Hong Kong in 2012. I'm both interested and disappointed in the output from the 2 x 100W panels. Best we've had is 10A and usually 2-5A. I think I bought cheap, poor quality panels.

I purchased a ceramic frying pan for the first time a couple of months ago..

I threw it in the cut (well not quite) 3 weeks after it arrived as everything started sticking to it although I had religiously gone through all the stuff on the destructions when first bought.

Good luck with it J.

Take care buying from Hong Kong, there are an awful lot of fakes coming out of there on Ebay at the mo.

Thinking of you Les as always xx

I am not sure your "please prove you're not a robot" Type the text in the box is working.

I typed a comment about your new ceramic frying pan and the image didn't come up to prove I was not a robot so I put anything in hoping I would get a new one and got told that the comment had gone through waiting for your approval..

Interesting to see what you publish now! xx

Hi Sue
Jaq loves her pan, uses no oil but she says must be a lowish heat.
Your put anything in comment has not shown up.
Yes some things can be a fraud on the bay but I tend to follow other peoples recommendations for a seller.
Les

Kitchen equipment which provides you with lovely food, Les, is a whole different story from boys' toys. The former is necessary thertefore allowable, the latter are an indulgence that wives know better than to refuse. Doesn't mean we agree, and usually means revenge will be exacted when you least expect it. Jaq and I are already plotting ...
Mxox (and D)

LOL Marilyn! As usual you succinctly hit the nail on the head!
JaqXX