Viola! A New Cooker is Installed

"I don't like to say that my kitchen is a religious place, but I would say that if I were a voodoo priestess, I would conduct my rituals there." ~Pearl Bailey, American actress and singer 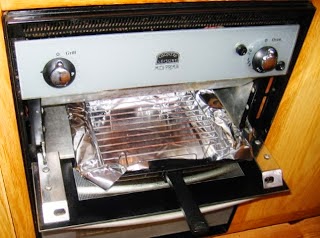 After thirty six months of doing my best to produce alchemy in the itty-bitty boat stove aka the Barbie camper oven (or Suzy Homemaker oven for American women my age who remember them), and making do with a cook top that took fifteen minutes to boil a half kettle of water for tea and could never do justice to a stir fry, I am thrilled right down to my socks to say we have a new cooker (kitchen stove for our U.S. readers) and boy does it cook!
In the Home Pride camper oven it took over two hours to bake a cake, which inevitably was overcooked on the outside and barely cooked in the middle. The recipes indicated an average cooking time of 32 minutes for two 9 inch round pans, up to 50 minutes for a 12 cup tube cake pan; the times reflecting the average in a typical kitchen range in a house. While taking much longer to bake anything in the old oven on board, it was so small I could only put one pan on the middle rack--the other one had to go on the bottom which was way too cool to cook anything all the way through, so every fifteen minutes I had to switch the pans from one shelf to another and also give them a half turn. Anyone who knows anything about baking knows that disturbing a cake while it is baking will kill the rise and the cake will fall. I never could produce a decent loaf of bread in the Home Pride oven either. Cooking casseroles in it meant doubling the time and escalloped potatoes never did cook in the middle of the baking dish--even after nearly three hours. If I had turned up the heat sufficiently to cook the middle--the sides would have been burned to a crisp.
We took possession of our slightly used Cannon Connemara cooker last Thursday and by Saturday at 5 p.m. my lovely husband had stripped out the old oven and cook top, cut out the counter top, walked to B & Q no less than twice for bits and bobs, and had our new cooker installed. My Best Beloved lets no moss grow on him--or any projects which need doing, bless him!
Water boils in five minutes, stir fries come out perfect--the meat is crisp and browned quickly and tender inside, the veg are browned on the surface and crisp to the bite and the sauce comes together 45 second after adding to the pan. Now it was time to test the oven and grill.
I baked an Applesauce cake and it took exactly 40 minutes to cook, rising to a lovely browned, tender crumb, evenly cooked sides, ends, and middle. Perfect! Potatoes Au Gratin came out of the oven cooked all the way through with a lovely browned crust after 50 minutes and pork chops cooked in the grill to perfection as did crostini.
I dug out my glass covered bowl which I used to use to raise bread dough, and mixed together 3 cups of flour, a sachet of yeast, one tsp. of salt and one and 5/8ths cups of water, covered the bowl and went to bed. Twelve hours later I slid the dough from the bowl, kneaded it about five times, shaped it into a round, l slid my cast iron enameled dutch oven with lid into my new oven on the second shelf, closed the door and pre-heated it to 450 F (Gas mark 7) while the dough rose again.
After 30 minutes I slid the round dough on the baking paper into the smoking hot dutch oven, slapped on the lid and slid it back in the oven to cook for 45 minutes. Out came a lovely round loaf of delicious bread just like I used to bake at Cloudhouse. The browned crust cracked as it cooled. The interior crumb was yeasty and chewy with the lovely air holes I like. At last--I can finally cook and enjoy it once more instead of feeling like I am camping out and making do. There is lovin' in that there oven! Thank you Les.
Posted by Mrs. Jaqueline Biggs at Wednesday, July 23, 2014

Bless you Jaq, what a wonderful feeling to be able to pour your love and care into the food you prepare for Les. Wishing you many contented hours of baking, sharing and eating in your happy boaty home.
Karen

No wonder he set to to get that cooker in for you, all the reward will come his way !!

Hello Ian and Karen,
Lovely to hear form you!! We hope you are well and happy these days too.

Between the new cooker and our Green Star juice extractor we will both hopefully be fit as a fiddle by this time next year. One more surgery to go to reverse Les' stoma and then we are free to roam unhindered once more.
JaqXX

Hi Nev,
Lovely to hear from you. We are excite down to our sock for you and Rachel and your new life chapter. It does take awhile to settle in though.

So will you be opening a floating bakery now then Jaq?
The Boaters Baking Company perhaps? LOL

Hi Jaq, please can you put a picture on of your dutch oven - I’ve never heard of one before! Your recipe for the bread looks easy but I’ve always had difficulty getting it to rise - any tips?

I have saed some of your previous notes regarding food. And when I rebuilt my residence installed a gas range. Being one person the oven doesn't receive that much use, the burners on top are well gas so yo know how reliablethe results are. As for your new cooker, what would said device have cost retail, if such were available? Friends have a similar device on their 42 foot sailboat which is currently at the opposite end of Lake Ontario near Picton Ontario and said device does wonderfully. And said sailboat has about six feet of clearance down the hatch so I have to be careful
there too. I already have the juicer and yes carrot and orange go together very well mid-day. If am on the road, the mixture goes into a stainless steel thermos for refreshment later.

Yea yea yea. No more making do and camping out. You are in your element again and Les (and you) are the beneficiaries. Yea yea yea. And it's a beautiful job well done Les ...you are apparently feeling great again. May the joy last.
Karen in Pullman

LOL! Hi Kevin, you never know, anything is possible. Rest assured if you ever catch up with us--or with you, there will cake, cookies, bread or something yum to tempt your tum.
JaqXX

Carol--just for you I posted again with pictures of dutch ovens, links to where they may be bought, and my recipe. Enjoy and please let us know how your bread turns out!!
Love JaqX

Hi Bryce,
Glad to read you are still juicing too. It was so dang hot today. I made a glass of orange Carrot juice, took it our on the bow and promptly knocked it over, broke the glass and lost all my delicious juice. I was so peeved with myself I went to bed and took along nap.
Love JaqX

Thanks girlfriend! Miss you!
Love JaqX~X