Water where it should not be

Light snow falling as I type this but as boaters know we are warm and have no worry of getting to work on snow bound roads so we just look out the window and say "ain`t it pretty".
Bit of maintenance today having put a new themostat in the fridge. Next job is to eliminate the water I found lurking below the floor. A quick check revealed it is clean but is not coming from the internal plumbing. Further probing has found damp/wet woodwork in the corner cupboard and will be looked at in daylight.
My guess at the moment is the join of the front well deck to the panel at the side of the front door. A lot of water floods the deck during tank filling and during cleaning the whole area while on a water point.
Failing this perhaps the breather pipe from the tank coming through the deck above the area of damp is allowing water including rainwater to seep down.  99% sure the problem is in this small area but some panel removal and a kettle of  water will expose all tomorrow.
Once it is sorted the problem will be removing the water, thinking a wet vac hire would be best.﻿
﻿
﻿ 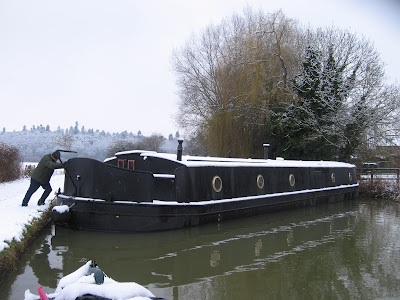 An adrift widebeam boat is not easy to get control of. With the help of a walker I released the one rope still in place and walked down the side of our boat as Jaq came slowly along the left of it. Then the walker pulled the rear while we towed the front in. Three pins back in and it was tied up again.

Nothing to identify it but it could well be licensed. We have no license on display as we are waiting for our gold license to arrive having sent the old disc back for a refund.
Just for clarification the Gold license was about £300 ($450) extra to the canal one but it allows access to the River Thames and Middle levels for the year. 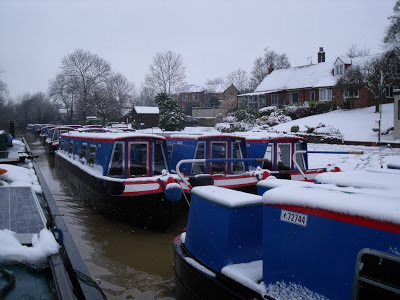 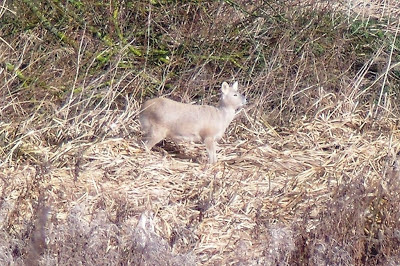 Muntjac Deer are plentiful but not often this visible. They originate from Woburn Park having been imported from China. Some escaped and some were released with the result they are breeding and spreading far and wide. They stand about 20 inches high and weigh about 36pounds.

Sure the water is not just condensation ?

I'm sure you know, but just to clarify for others, you don't need a licence at all for the Middle Level itself, although to get there you do need to go via the Nene, which is an EA waterway and so not covered by the CRT licence. On its own though it's probably not worth buying a Gold licence just to access the Middle Level; certainly we used to find it cheaper to buy short term EA licences.

Hi Alf
Thinking you could be right.

Hello Sarah
Yes you are correct but our main use will, river flow permitting, be to spend a long time on the Thames.