The last time we were on the Grand Union was almost a year ago. We had left London mid December and passed through Braunston about the second week of January on our way north. 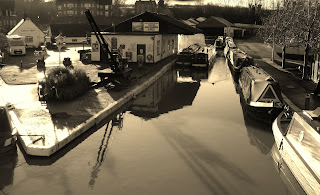 The picture above is a few days old whereas the one below is from the Frith Collection and is circa 1960. This was the original route of the Oxford canal past the buildings and across the road into the fields crossing the present route at bridge 97 along the puddlebanks then turning back near bridge 98. On both sides of bridge 97 the old canal is still in water and on the towpath side amongst the greenery a small section can still be found.

In 1793 an act of Parliament authorised the Grand Junction to build a canal from here at Braunston to Brentford. A much shorter route than the Oxford canal that went via the River Thames. The G. J. route was to be 60 miles shorter and even with more locks would still be much faster. The Oxford raised many objections but could not overcome the might of the rich backers behind the Grand Junction. The Oxford planned amongst others a canal from north of Oxford itself to Marylebone in London a distance of 60 miles. Routes to join up with the Grand Junction at Marsworth were as you can imagine turned down by the G. J. To cut a long and interesting history the Grand Junction had to guarantee the Oxford £10,000($15,000) for lost tolls as boats chose to leave their canal in preference to the G.J.
The book is fascinating.

So London is our destination although not Brentford. We intend a return visit to Paddington for a 7 day stay so I can show Jaq more of London.
So ahead of us we have 100 miles and 90 locks. The canal planner states that travelling 3 hours per day the journey will take 52 hours or about 17 days. Well we can quite definitely say our journey is to be at a slow pace and will take.................who knows.

We still have our Oyster cards from last year so just a small top up. I have my national bus pass so will need the Oyster card just on the underground train system. After Paddington  our route will be the Regents canal through north London and onto the Rivers Lee and Stort.
Posted by Les Biggs at Wednesday, January 02, 2013