Out of the Ice

About 2 weeks ago at Blisworth after going back to the services block to fill the water tank and dump the rubbish the engine decided to overheat.
Mmmm! now having looked at that sentence and noticed it makes no mention of the toilet cassette emptying I need to mention the the composting toilet. Ok so if you feel the need to skip  stop here and start to read from under the hose pictures below. We know of people very interested in the Airhead hence the following.
Now all good gardeners will have a compost heap and will know it takes a while to break down the stuff on your pile of leaves etc. The airhead toilet we installed is we think fantastic with no smell and no heavy smelly cassettes to empty and rinse out.
Now we need to empty ours about every 4/5 weeks. These toilets were originally designed for U.S. sailboats that with occasional use and long periods moored in harbour gave the contents time to break down to a dry crumbly matter.
So as ours is used continually the disposal is a bit more than tipping out the contents on the garden. It can be emptied the same as a cassette but as it won`t tip out easily this could be a problem for others in the elsan queue.
We found the old `bucket and chuck it` the best way. Now what this means folks either side of the pond is dig a decent depth hole and bury it. This is usually done when we are moored way out in the countryside away from the towpath.
I have said it before but once again, there is no smell with this system as the liquids are separated from the solids and the continual drawing of air through the toilet starts the composting cycle. 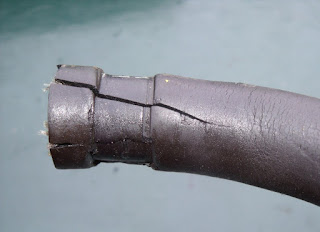 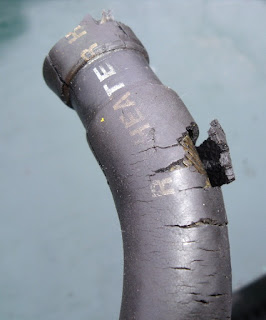 The above was an update for the people who have showed an interest.
OK the overheating engine, a quick check while topping up the water failed to spot the hose pictured on the right as the damage was  on the under side. All I saw was the hose on the left (ignore the horizontal cuts for easy removal). Sitting in the spares box since the boat was new a length of  heater hose. The hose is the engine take off to the Calorfier (hot water tank) and explains why the water has not been as hot lately. The seepage was on to the top of the engine and quickly evaporated leaving me no tell tale puddles on the engine bay floor. Just for ease of not having to bleed it all twice I replaced the return pipe as well. Next time you are close and personal with your engine, ladies it`s a man thing, just check the undersides of your water pipes men. Oh!  take that which way you want.

The rise in temperatures and heavy rain over the weekend as good as removed all traces of ice from the canal. So we decided to move down the seven Stoke Bruerne locks and cruise to pastures new. Two locks from the bottom it started to rain and having reached the bottom lock the captain (the real one) decided to stop for lunch. As the wind had increased and the rain was still falling the actual second in command (the one who thinks of captaincy) suggested staying the night so here is as far as we travelled but it sure was good to move after being iced in. We did have some nice evenings with Jacquie and Stein, like ducks 2 water and below is a picture they took of Jaq and I while we all walked in the snow. 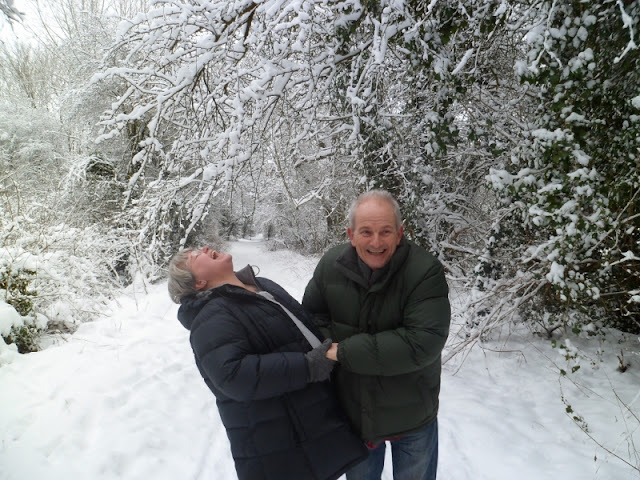 Fabulous photo of you two. Winter wonderland here in Pullman too. As for the head ... messy but necessary. Very nice to have a handy guy around. So on our S/V Anna Maru Charley was the Captain (no doubt about it ..just listen to him holler) and I was the Admiral!! :-) We had t- shirts to prove it. Karen

Crazy fools abound! Glad to see Jaq and Les are enjoying a light winter's snow fall! That is a wonderful photograph!
Some four or five hours north of where I live (ask Mike and Phil on Garnet for where is clarification) is the Cambrian Shield, or at least the start of same. Wonderful summer cottage areas however
there is precious little soil over the rocks and hence out houses, loos whatever have to be carefully placed and managed. Enter the self-contained crapper (with apologies to Thomas)!What you have is a composting toilet, which does as you've noticed, compost the good and bad with a little help from fluids and shall continue to do so for many years. I have friends whose rather large cottages
line the shores of various inland lakes and are constructed on solid rock outcroppings; they all use composter toilets. The toilets usually are cleared on the Victoria Day weekend (third weekend in May in Canada, except Quebec ((gee I wonder why?))as it is cottage opening after the harsh winter.
Most cottage units depending upon use, get emptied maybe three or four times, and often into an area that needs fertilization. Cottages are closed the second weekend of October which is Canada's Thanksgiving Day and the unit sits over winter. Empty in the spring.

A warning at least from one whose friend's cottage found their unit inadequate (if a busy period with many visitors arriving, dump the unit ahead of time and if there is a water spigot near by rinse the internal unit. As long as there is moving air in the loo and over the nit, no smells will be heard with the sound of a gurgling loo.

Miserable weather here. Snow the freezing rain and now fog and just rain. Up to plus 9 on Tuesday January 29 and then more rain followed by plumenting temperatures down to perhaps minus 15 Celsius with more snow..Now 18:22 January 28, very very foggy outside!

Lovely pic! Weather looks like here but you are enjoying it more than I am!

Hi Karen
So far away but Jaq and I are thinking of you very much.
Ok so now I can be the Admiral, I love it.
XX

Hi Sally
The snow has gone now so we can carry on with the cruise. Big hi to Joe.
Les

I did take a fab photo - didn't I. See you along the way. And yes we too have had a fab time with you. We met as bloggers, and left as friends. Jacquie

Hi Bryce
Nice to here from you even if only a couple of lines! Ha Ha matey.
Yes I have seen a few of the out houses at beauty spots way out in the middle of nowhere far away from plunbing. Jaq says they move the building to a new pit and fill the old one in.

Ah ha. Another convert to compost. We will get you all in the end!

Another plus side is you use less water so need to fill up the water tank less often!

Hi Jacquie,
I am thinking I should hire you as my official photographer! I really don't like to have my picture taken but this one is brilliant! It has been grand getting to know you and Stein and making good friends.
Take and we will see you on down the water road,
Jaqx

Hi Kath,
Hope you are staying well and warm this winter. After reviewing our options the AIRHEAD marine composting loo was the only one that made any sense for us.
LOL! WE too feel like converting the world to compost and yes, you are absolutely correct, we no longer flush our precious water down the loo.
Hope we see you out and about this summer. Take care and mind how you go,
Jaq