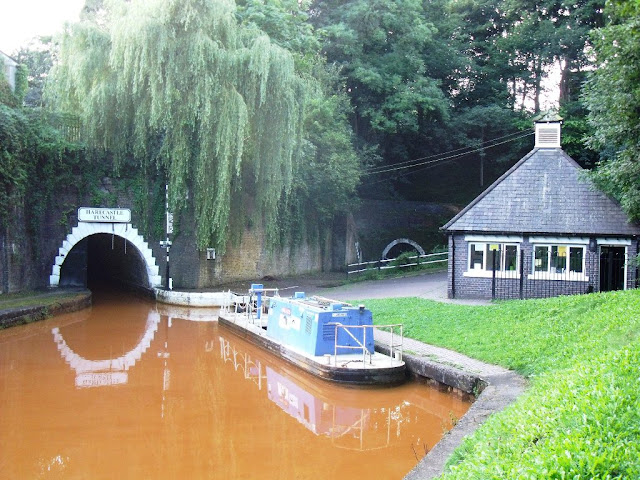 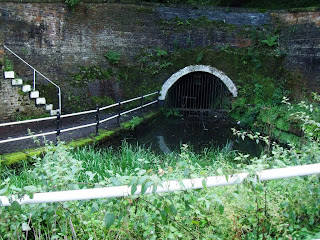 The basin at the entrance to the harecastle Tunnels looks very tranquil as we wait for five boats to exit. The tunnel is operated by CART (Canal and River Trust) staff at each end and I think 8 boats maximum make the journey one way at a time. The average time for the journey is 45 minutes we made it through in 31 as we were first to enter. First is always best then you don`t have the fumes from boats in front that linger despite fans operating at the southern
portal.﻿﻿﻿﻿﻿﻿﻿﻿﻿﻿﻿﻿
The picture on the left above is the original tunnel built in 1766 over 11years by Brindley. It  was one and three quarter miles long and had no towpath for the horse so boats had to be legged through the tunnel.
In 1825 Thomas Telford started the present tunnel which took just 3 years and had a towpath. In 1918 the original Brindley tunnel ceased to be used due to low headroom. It collapsed part way through in the 1960`s. The towpath in the present tunnel was removed in 1986 to give more headroom because of subsidence. The height through the tunnel today varies very much and boat chimneys need to be removed for the journey. Keeping well to the middle and ducking as the roof lowered in several places we made it through.﻿﻿﻿﻿﻿﻿﻿﻿﻿﻿﻿﻿
﻿﻿﻿﻿﻿﻿ 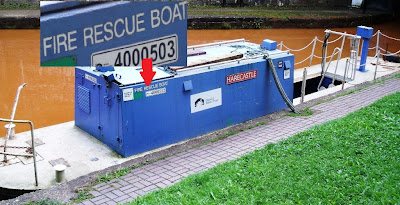 Not sure about the signage on the side of the boat but click on this link to see it in action http://www.youtube.com/watch?v=JvfJR7nUA1c .
Posted by Les Biggs at Thursday, August 30, 2012