Emerging from Harecastle tunnel I headed for Westport Lake as we had a lot of washing to do and the towpath is very wide for the line. I suppose it was after the 2nd machine load had started that I noticed the volt meter  was showing just a shade over 12v, not good. After going down below decks to check for loose/broken wires and finding nothing amiss other than an extremely hot alternator I decided to call RCR. as we are covered for parts breakdown. 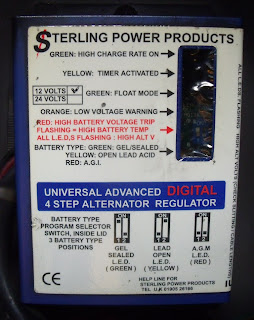 So the next day they phoned to  say it had been tested and found to be working fine. The opinion of the person I spoke to was the alternator regulator was at fault and to leave it isolated to see how the alternator functions.

The regulator boosts the current going to the batteries by fooling the alternator by some trickery inside that little box that the batteries need a bit more charging. Now all this baffles me but all I know is the volt meter before the electric system had a nervous breakdown showed 14v ish. Now it shows about 13.2. this it seems is less than actual as the engineer put a meter on the alternator and it showed 14v.

All these figures need looking at using my meter before I can make any judgements. We have set off cruising again so living as always with batteries being charged as normal and our power usage I can tell by the battery readout each morning if there is a problem.

I might check the wiring on the regulator and connect it back into the system whilst monitoring the readings and alternator temperature  while moored up.
All was well this morning as far as battery power goes but I feel a few days of normal use is needed to notice any power drop in the batteries.

Anyway the 2 days we spent at Westport Lake gave us a chance to have our friends Ken and Sue on Nb Cleddau on board for dinner. Beer, Wine, good conversation and a game of cards made for a very enjoyable evening.
Posted by Les Biggs at Friday, August 31, 2012