Well it seems I am not alone in my dissapointment of the Thames boat pageant. The BBC has recieved complaints and a petition has been started on the Canal World Forum although I see no point as the damage is done. The BBC are after all a law unto themselves funded by a mountain of cash from all those licence payers. 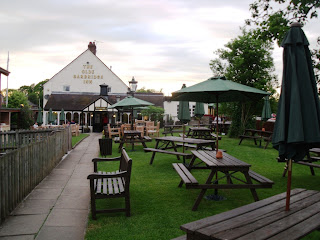 Nantwich has been a magnet lately. Every time we leave a force draws us back. No it`s not any of Jaq`s aliens but the dreaded dentist. The Olde Barbridge Inn near Barbridge junction where the Middlewich arm leaves the Shroppie has recently re-opened following a closure for reasons i`m not sure of. Anyway i have 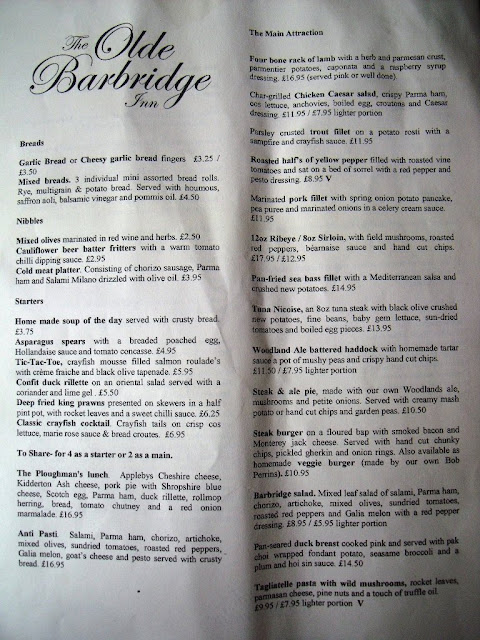 eaten here some years back and Jaq and I decided as a leaving Nantwich celebration we would dine out. Jaq had the Sirloin and for me the Steak and Ale pie seemed to be calling me. Now Jaq is an excellent cook as those that have dined aboard Nb Valerie will I`m sure confirm and her opinion was "it was alright" so perhaps points low down the scale. Myself the pie was superb, full of meat and very flavourful.
The menu, left, can be read on the website although I found it very dull. Not sure with the new blogger but clicking the menu image used to enlarge it.
We all have different wants regarding menu, price, atmosphere etc so mine is just a personal opinion. The menu from my last visit some 3years back was more to my taste being larger and contained a more pub like choice. Prices, well make your own judgements as we all value things differently. The service was fairly good but I felt it didn`t match the upgraded pub menu they were presenting. 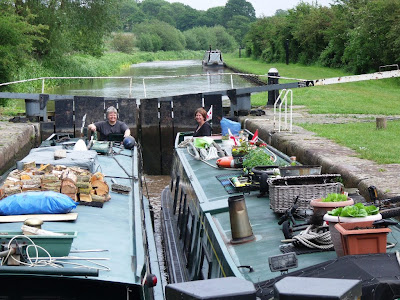 After the pub meal we stopped at Calverley sevices to start another book swap and then moored nearby for a couple of  days waiting for friends to catch up. We are now heading for Chester in the company of Scooby and Rita on board Festina Lente(sorry no blog to link to). I had not seen them for quite some time and Jaq had only known Rita via Crap Facebook. Rita harks from Canada so as you can imagine they were chatting in the locks non stop. In fact they on several occasions had to be told the gates were open and that they could if time allowed bring the boats out.
Posted by Les Biggs at Thursday, June 07, 2012

Hi both,
The first time we ate at the Barbridge was when we first hired a boat in about 1976/7 and after that visited many times by car when we lived near Chester, it was always a good meal too.
But last few times we’ve eaten outside because the last time we went inside you couldn’t touch the tables they were so sticky and the laminated menus were nearly as bad!
So any improvement is good!

Annon
the pics enlarge when I click them
Les

Hi Carol
No sticky tables or Laminated menus and the food served to other tables around us looked good.
Might try it again one day but do feel it was better in the past.
Les

I too have had mixed blessings at the Barbridge. We ate there on our first holiday and it was fantastic but once I moved to Crewe it went down hill rapidly and on one occassion I ended up walking out without my meal as they forgot to put our order through. Since leaving Crewe I haven't been but doubt I would go there anymore anyway. Carol BV

Carol BV
Sorry to answer so late. XX
Yes a while back it was good. Perhaps the reason it has been closed was the downhill service. It seems fine now but not my top choice for a return visit. Near your old stomping ground if you are up this way, shout.