Something new and a bit of a rant and an anniversary 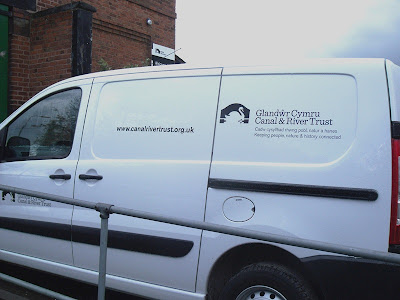 British Waterways makes way for Canal and River Trust as this new van displays it`s new master. Just next to this van at Calverley services stood one in the old livery and my thoughts were that they would bring in the new on a gradual basis. It is of course to much to ask that vast amounts of money will be wasted  spent on the thousands of signs, one just visible above the van, all over the system.

Why they could not have left the name and just changed to trust status is beyond me. After all the canals and rivers are waterways of Britain, British Waterways. Would have saved a lot of cash that could have been spent on the canals. I expect the next thing will be the thousands of signs, one just above the van, all over the system will be changed to the new name and logo, money wasted.

One thing that i am concerned about is that the `Trust` might decide to get caught up in the crap floating around the system regarding putting a premium on the Cont. cruising licence. This has been mentioned a long way back and more recently in letters to boat magazines that resulted in recent heated interaction between bloggers.
WARNING; If you comment on this post make no mention of those involved or you will not be published.

For our friends in the U.S. Jaq and I are Continuous cruisers in as much as we do not moor in a Marina but move around the canals on a continuous journey. Now talk has been in the past and recently to charge a higher licence fee for boaters like Jaq and I.
All sorts of arguments both for and against are being bandied around. The main one being we use the system more, I agree we do, so what.

When I lived and worked ashore I used my business vehicle all day long Monday thru Friday. My car only got used on the weekend but I still paid the same tax for it as the guy next door who used his all week. If i had the opportunity I could have used the car all week but sadly I was working not retired so I moored parked it on the drive till I could use it.

Anyway this is my personal rant about something I can`t stop happening, are there any C/C on the trust to speak up for me?. I think the problems of licence evasion will escalate if these increases come into being.
EDIT:  This rant to make it clear to all is directed at the powers that be. I/We know many boaters who use their boat in different ways. We all sail under one name, BOATERS, not of  any particular group just boaters. 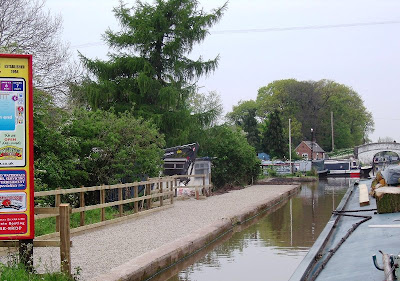 This is the new services area that is being provided by the Nantwich Canal Centre on the main line at Nantwich embankment. As some will recognise just ahead are the moorings of the old Empress hire fleet and beyond that the BW services at bridge 92. The present services will still be available in the basin to service the hire and share boats moored there. Out on the mainline additional pump out and diesel facilities and a new chandlery will be installed soon. The old Chandlery is now occupied by the Antiques business that shall we just say re-located from Venetian Marina on the Middlewich arm when new owners took over the marina. At present the chandlery is housed in a temporary building until a new home is constructed.

OK just to finish:1 year ago May 21st, 2011 was the last time I smoked.  Jaq arrived in the UK to spend 2 weeks on the boat and we then returned to America to marry and obtain a visa for her to live in the UK. Anyone who is not aware of the story can read Jaq`s blog `So this is love` and read all about it starting early November 2010.
One year, Wow! It seems longer, so comfortable are we with each other, sometimes I feel we have been together for years.﻿
Posted by Les Biggs at Sunday, May 20, 2012

I have thought long and hard about charing CCers more and I am of the opinion that it is unfair, because:-

know how to treat locks

understand the go slow past others

have a relatively low environmental footprint

Are generally helpful to all other boaters, experienced or otherwise

So given my opinion as above I agree that it would be wrong to charge CCers more.

I made my choice to buy a NB and moor in a marina, fully aware of the related costs prior to purchase.

I am sure Ccers did the same. Why should they now be penalised?

Possibly should have been a post on my own blog but you are the CCers, not me

I think they are doing it gradually and this being a new van has been done out with the new livery in advance rather than having to re-do it later... But... I also recall seeing somewhere that it still isn't quite right as the English is meant to come before the Welsh and some Welsh person has been a bit clever here (look forward to you explaining to your US readers about the Welsh language...)

They can't keep the name British Waterways even if they wanted to because BW will still exist in Scotland!

Hi Sally
Many thanks, I still every once in a while fancy a smoke.Strong drug is nicotine.
Les

Hi Jesseca
Mum says Hi!
1st. All boaters pay the same license fee so they can use the waterway as often as they wish.
2nd. Some people perhaps still working or just wanting to boat occasionally choose to pay for a mooring in a Marina.
So both groups of boaters need a license to use the waterway but neither is compelled to pay for a mooring. Your Mom and I as Cont. cruisers can only moor along the waterway for a max. of 14 days then need to move on.
The people who use their boat less than us pay for a marina mooring to keep the boat secure when not using it. They use the mooring whenever they choose.
Hope this is clear if not comment again and i`ll answer.
Hi to Ben and love to the boys.
LESXX

Hi Paul
Yes we all make decisions in life and I think you have a great life living in a marina. A lot of plus`s that has attracted more people to living afloat.
Just recently Jaq and I met a couple with 2 small children choosing to live on a boat because of the high cost of housing.
Good luck to them making the best of their life.

Hi both, congratulations Les on a year without the weed. I gave up over 30 years ago and I still occasionally fancy a 'drag'!

Hi Sarah
BW(Scotland)? Too easy better to spend money.
The van was new, I just hope the older van keeps it`s old identity till it is retired.
At least we have people like you to keep things as they were.
Real boats on link below everyone.
http://chertsey130.blogspot.co.uk/

Carol
I think in 30yrs time at 94 i might just have a smoke, just one.

Congratulations on your first nicotine free year - that's the difficult one! I gave up when Benson and Hedges rose to 50p for 20. Paid less than a new London Transport bus driver for flying one of Her Majesty's aeroplanes and with 2 small children- something had to give. One of my better decisions!
Apart from that we have just managed 4 days on Cleddau and have planned our summer cruises. I hope we meet up again on the cut.
Ken of Ken&Sue nb Cleddau