Books, a Boat, and Springtime Things

After Monday`s dental appointment my next one is tomorrow (Friday), so the decision was made to spend three days on the Middlewich arm and give Jaq her wish to spring clean the boat. We set up the drying line on a deserted bit of towpath and all the curtains, dinette covers, cushion covers--even our chair covers--were removed. Nine washing machine loads later the towpath resembled a laundry. At least the remote location meant we had didn't have to worry about blocking the path if people happened by, although there was plenty of room for folks to pass.﻿ 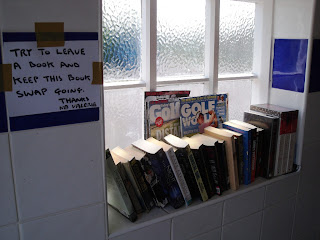 Before we left Nantwich again, we stopped at the services to take on water for the massive washathon. We had accumulated a few books, so while the tank was filling I started a book swap on the window ledge. There are many of these book swaps on the canal system and some even have DVD`s or in the old money, VHS tapes. 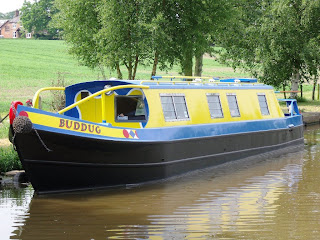 Over the past few weeks we have passed this obviously old, lovely clean and tidy boat several times. I checked the registered number on Jim Sheads site which indicated it listed it as "builder unknown." Now someone will know the builder, but isn`t the boat a Harborough or am getting mixed up? It`s those bars over the forward deck that are triggering something in my brain or has the dentist`s needle made my brain go la! la!. 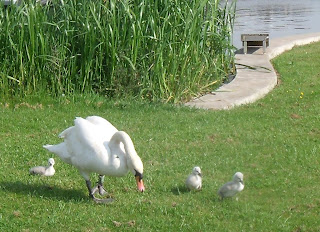 Making our way along the Middlewich arm we spotted these three cygnets coming from the nest outside the new marina at Church Minshul. The size of the Cygnets, coupled with the extremely high man-made banks, made us wonder if this was their first venture into the water. We just pulled over and watched as mum and dad went in to the water, closely followed by two of the young. The third(last in the pic) kept stopping for a sit down and took a long time to drop in off the side to join the others. The significance of this was reflected by the absence of one cygnet on our return trip. We can only guess the last cygnet had not been 100% healthy when emerging from the egg.

Les,
Possibly an Anglo Welsh hire boat from the 1960s/70s.
Ken
PS Standedge bookings are made - here comes the Huddersfield narrow in June!

Hi Jaq, Les,
I've read/heard this discussion before re the two 'rails' on the bow - I think it may have been with Geoff on Seyella?? Tunnel guards I think and we hired a boat just like that back in 1987! You may be interested to know that the boat name Buddug (pronounced Bithig) is Welsh for Victoria!

The Muirs on GARNET said...

Hmmm, I remember seeing some old pictures of Black Prince boats wit a similar set of pipes, "Next of Kin - The Narrowboat" had them on the hire boat used in that episode. Being a foreigner, I thought they were merely a frame for a cover used during the winter to keep out the precipitation.
We have a killer swan here at Calcutt, really aggressive to the Canada Geese and goslings. They are now down to 5 from 7, we were told that last year the cob drowned all of them. Damity thing bit my toes last week!

Hi ken/Sue
Best be careful going on all these trips you might end up being classed as C/Cruisers.LOL
Enjoy your trip.
I will check out the Anglo Welsh angle.
Les

hello Carol
I am sure these bars are the style of one builder and perhaps they were built for Anglo Welsh as has been suggested.
Les

Hi Mike
If the Swan has a nest nearby it will defend it`s territory against all.
Happy 1st cruise.
Les