St. Botolphs church here at Newbold was a lot closer to the canal when the old route run past it. I did a post HERE  in 2007 about it, so won`t repeat things,  but the part between the church and the route to 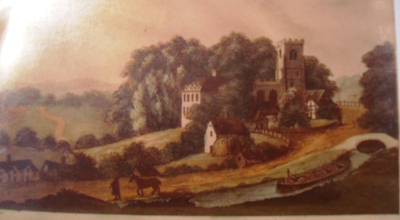 the pubs has always﻿ been a mystery. Out walking, I got in conversation with a man living opposite the church and he had a photograph of the above picture, the original of which  hangs in the St. Botolphs.
I have read somewhere the tunnel was 125yds long and this would put the mouth about the middle of the road dead centre of the picture. I paced out across the subsided grass the other side of the hedge to get the direction and distance. The other tunnel mouth is just about where the tall tree to the right of the church tower is. Standing where i took the picture it all looks to much of a hill for a canal route but in 1790ish the geography was a lot different. 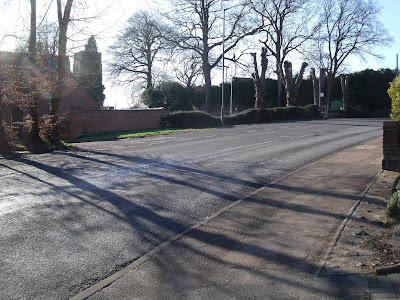 Hope if anyone has tried Jaq`s triple caramel cake it went well. All i can say is mine has all gone and i am now into a spice cake with cream cheese frosting. All Jaq`s wonderful cooking is made from scratch and tastes divine. Yesterday Jaq had me peeling Cardamom pods to use the seeds, after grinding, to flavour the spice cake.
Ok enough of that side of the blog but the afternoon cuppa and cake tasted so good I felt the need to mention it.
Posted by Les Biggs at Thursday, February 09, 2012

How cool! I love exploring old pictures and maps. And just how much wait have you put on since you got married, Les??

Hello anonymous,
Seeing as how you've kep tyoru name secret, I shall keep my weight secret! I'm glad you enjoy the maps and pictures.

Typical Les, has to pace out where the tunnel was. Next, he'll build a model of it to show what it was like to people. Lol

We'll have to catch up when you a bit closer to here. It's been nearly a year since we got together.

Spice cake with cream cheese frosting?? Lovely!! I know your blog is about travelling and boatlife, but if you mention mouth-watering things like this you should not be surprised if people want to get the RECIPE!! Hugs and have a great day, Silvia

I used to live in Newbold and had an interest in the canals.

Is pretty much spot on.

If you go into the Churchyard and follow the path to the right you can enter the fields via a style. Directly right is bricked up South tunnel. As a kid it was open, the link has a picture, and the braver ones ventured inside. I was too scared, but would have love to see it now.