Life and death In Newbold

Since we've been frozen here at Newbold-on-Avon I've been enjoying a daily walk through Saint Botolph's churchyard which leads on--just past the church cemetery--to a public footpath through a huge field with 19 old oak trees planted side by side down the middle.
From there the canal traveled adjacent to the cemetery and gently wrapped around the back end of it ﻿﻿before veering off around a curve, and disappearing from view into what is now the bottom of the very large field with the Oak walk, meandering onward towards Hawksbury Junction and the Coventry canal.


It is a thoughtful journey indeed which takes one past seven hundred years of the local dead and their magnificently carved gravestones. I notice there are nine new graves in the cemetery since we we were here last May.
I first stopped in this churchyard last spring on my two week visit to England.
Newbold is a boater's village with the canal passing right by its two pubs--the Barley Mow and The Boat. Before it was straightened, the old Oxford canal used to pass through what is now the the parking lot of the pubs, mere feet from their doors.  Cutting straight through, it flowed out to what is now the Main Street, crossed over and passed across the front of Saint Botolphs, curving right 'round it on the right where there is still an old brick canal bridge in site of the churchyard.
Last week I found myself walking through the cemetery on a very dark and misty afternoon and I laughed, thinking about all the ghost stories and films set over the years in such atmospheric places.
I found it peaceful, pleasant and restful. Local folks often come to the graveyard of St. Botolph's to sit on a bench under an ancient Oak or Cedar, dappled in shade and set amongst mossy ground, with centuries of their forbears and neighbors with whom to keep company. 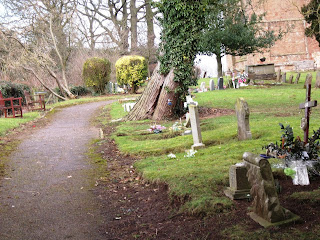 There is a children's grave walk which looks out over the hedge to the old canal bed. I walked the paved path which meanders past thirty two gravestones, marveling that only four had not been well kept. All along the lane of small graves, flowers, toys, and mementos are tucked neatly alongside headstones shaped like hearts, crosses, and tablets. One has a teddy bear peeking over the top; others are guarded by angels cut from stone.
The first one belongs to Courtney, nicknamed Princess Boo, ten years old when she died. Her grave is enclosed with white planters filled with delicate silk roses and pink net butterflies. A tiny pink dragonfly wind charm is attached to the large Holly tree which shelters Courtney's grave. 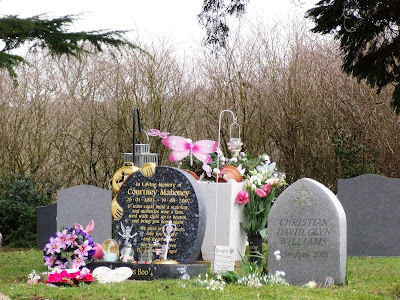 It tinkles delicately in the breeze; the wind ruffles the flowers, flutters the butterfly, and spins a pinwheel. A small white lantern tosses from another tree branch, placed there no doubt by her parents, who couldn't bear to leave the body of their child lying in the dark.
Les and I perused an old Oxford canal map dated 1828 which we found with the help of the Rugby librarian. We noticed a farm just near St. Botolph's called Widow Norman's Farm which the old Oxford canal route encircled as it traveled away from the church; a bridge on the farm road over the old canal was called Widow Norman's bridge.
Current maps indicate the widow's farm corresponds to Badger Lodge--still a farm, although the bridge is no longer there since the canal was straightened.

On one of my churchyard forays into the older stones located near the front of the Norman towered church, I came across several very old headstones and two large above ground crypts.
A nearby headstone tilting into the loamy green of the yard with barely discernible curlicued chiseling reads, "John Norman Senior of Newbold, died Feb. 13th, 174 and 3/4th." This strange date is due to "a change in the calendar in the eighteenth century,"  according to the web page describing Saint Botolph's. (http://www.stbotolphstjohn.org.uk/stbotolphshistory.htmhttp://www.stbotolphstjohn.org.uk/stbotolphshistory.htm, accessed 02/14/2012.) "By one system February 13th was 1743 and by another it was 1744." 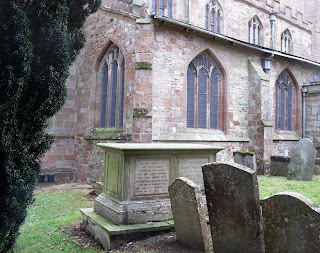 The oldest crypt standing above ground near the priest's door to the church is inscribed "Sacred to the memory of John Norman of Newbold, who passed in 1816 aged 63, and Ann Umber, his widow, born at Hunningham in 1797, died Bubbenhall, June 30th, 1859, age 90."
Here lies widow Norman, after whom a farm and a bridge over the old canal were named. John's spinster sister Jane, age 63, is also interred in the crypt, having passed on November 12th, 1826--a year midway through a decade which saw the English countryside ravished by rolling epidemics of smallpox, fevers, and cholera. 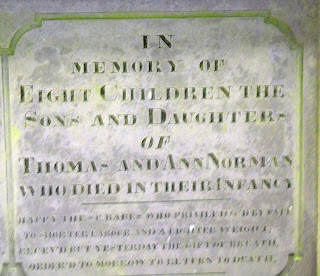 Les calls the gate from the churchyard to the Oak walk a "kissing gate" because only one person at a time can go through, after which the gate must be pushed back to allow the next person access.
He always goes first, then turns and kisses me over the top of the gate. We walk along the path past the old canal bed, flanked on either side by old gnarled oaks while the tops of old gravestones peek over the hedges.
Saint Botolph's cemetery--life and history, buried amongst the quiet dead. Graveyards shelter our loved ones, and hold fast to their memories; those who are remembered, live.﻿﻿﻿

The old Newbold Tunnel was put up 'for sale' by Auction by BW in about 1992.

It sold for about £3000 to some bidders who has drunk too much 'stagger syrup'. It was a crazy bid and a crazy price, the sale never completed.

Really enjoying the blog updates. Thanks for sharing.
Jon

If you enjoy old churches then make sure that you visit Wadenhoe church on the Nene - the churchyard is fascinating!

Mike G.,
Thanks for the info on the Newbold tunnel How strange to think it could be sold into private hands.
Jaq
Hi Jon,
Thanks for commenting and for continuing to follow us.
:)Jaq

Hello Sue,
We will defintely visit the Wadenhoe church when we get over to the Nene. I appreciate the heads up about it.

When I visit an ancient church I am always moved to consider the countless hands and feet that trod the floors and touched the stones--especially the stone masons.
Jaq

Hi Mike,
Hoping things are well with you and Phil as you wrap up your Canadian home base and head for your new life over here on the canal.
Cheers!
Jaq

Beautiful entry, thank you very much!
Made me think of my friend who used to live near Notthingham before she moved the Australia. They used to live nextdoor to a graveyard, and the mom always said, "When my time comes - just throw me over!"

Have a great day, Silvia

I love old cemeteries.They can tell us so much about social history and some of ghetto inscriptions are beautiful. I love walking around the city of London cemetery wherey mum is on the summer, it is always very peaceful. Carol (bv)

Sorry ignore the ghetto word, my phone has a mind of it's own. LOL

Rumour has it that BW sold the tunnel in the mid 90's to a local farmer for £1000 and then gave all the money to Comic Relief.