Stoke Bruerne and through Blisworth 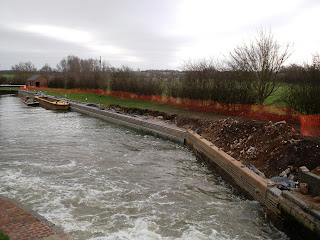 The first pound of the Stoke Bruerne flight looks a lot different to when we were going south back in November. The bank side work is very good 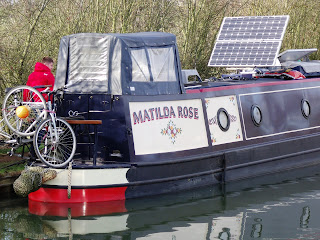 Halfway up the flight and we meet up with Graham off nb Matilda Rose out dog walking. Jill was away so perhaps on the way Jill we might get a chance to say hi. Thing is Graham walked past me at a lock turned back and said "I recognised Jaq First"  Thanks for your help up the flight Graham. 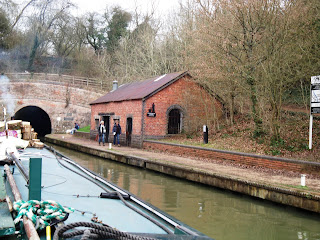 Nice to see the  building next to Blisworth Tunnel is now in use as a Blacksmiths. The building was once a forge and stores for the tugs that used to pull boats through the tunnel.

The steam tugs operated between 1871-1936. The charge was 1/6d (7.5p) laden and 1/- (5p) for empties. Leggers were made redundant. It seems the congestion caused by the slow legging of boats was eased by the tugs that would pull a string of boats through quickly.

Some legging pics on this site for those who are wondering especially Jaq`s USA friends & family who i know read the blog.

Look at this from the web.. The whole article is HERE.  These guys after so many years legging must have had some good leg muscles. 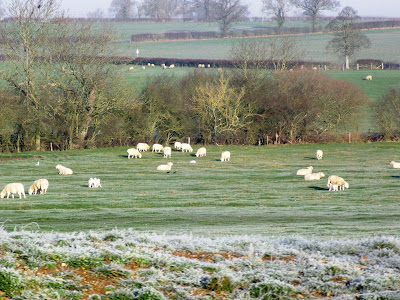 First lambs of 2012. They are there click the pic. These were on the Braunston Summit just after leaving Norton Jct. the branch to Leicester.

Just had an e mail advising the stoppage at Easenhall bridge on the Oxford is delayed until Feb.13th so our plans have now changed. Instead of staying on the Gd. Union and climbing the Hatton flight we will now be going on my much preferred route via the Coventry and the Atherstone flight and thence onto the Trent&Mersey
Posted by Les Biggs at Tuesday, January 17, 2012

Hi both - where are you heading for?

Llangollen but probably not there until late March. Going via Atherstone, Gt. Heywood Penkridge and the Shroppie.

We're in no rush and may still be on this stretch even then! Let us know when you've turned in at Hurleston and we'll see if we can meet up. Happy cruising!