Canal closures- is this the norm in 2012

I know Jaq and I were in America for most of the summer in 2011 but we did hear of the lack of rain but I for one didn`t realise how bad things were until we started our trip south to London. Marsworth reservoirs then were the lowest I had seen in 6yrs.

Due to ongoing extremely dry conditions and to protect very low reservoir stocks - we will be lowering the operating levels of the Tring summit by 300mm from Wednesday 11th January 2012 (am).

Whilst the volume of water required for lock operations is low this time of year, a feed from the reservoir group and from groundwater sources has still been required to maintain the canal at the normal operational level. The current demand on reservoirs and groundwater sources will, if maintained, increase the risk of having depleted water resources during the 2012 main boating season.

The immediate affected area is between :-
Lock 39, Startops Reservoir/Bluebells Café, and Lock 49, Northchurch (NB. there is a full stoppage already planned at Lock 49 from 23/01 to 03/02)

The above section will be CLOSED to through traffic and moored boats* from Wed 11th Jan(am) until further notice.

Reduced operating levels (300mm min) will not allow boats to safely moor or navigate the section. A short section at Cowroast will be contained at normal levels through the implementation of stop planks (between Lock 46 and New Ground Bridge, no. 136).

This will afford stability (although immobility for moorers at Cowroast long term site and the marina). The 2 locks (Lock 39 & 49) will be locked throughout, as others may be within the affected area to avoid losses through misuse. 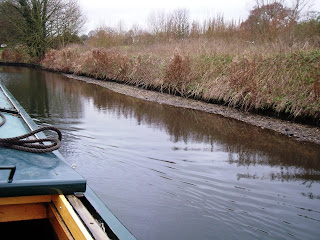 This was the pound north of Fishery lock Hemel. 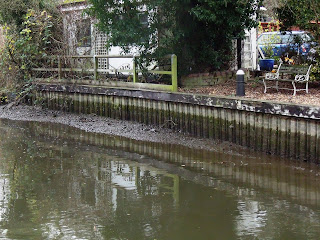 This was coming out of Bottom Side lock 57 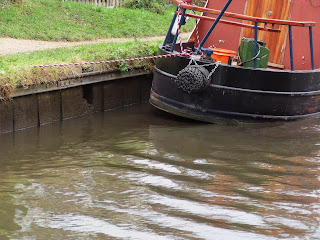 This is the pound leading up to Rising Sun Lock in Berko. 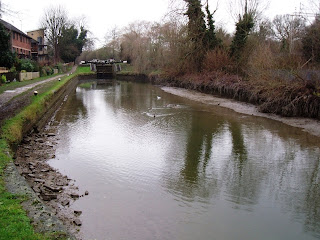 This is between Gas Locks Berko after I started putting water in to fill the lock nb Valerie was in behind where i`m standing. Poor Jaq at the helm had no idea why the boat wasn`t rising even after she saw me raising the paddles. I then went up to let water down and came back to let her know what was happening and to keep centre channel. 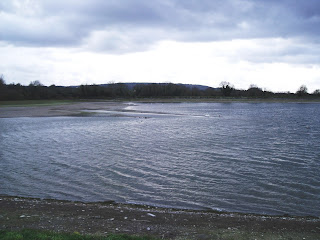 Startops reservoir Marsworth and the level is much worse than on our October southbound trip. 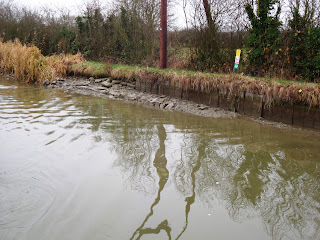 This un-known location is north of Marsworth and the other photos I took on this section seemed to have been wiped from the laptop. Don`t ask, just put it down to old age.
Thinking things over I`m glad we decided to go into London when we did. Thanks to Del & Al for saying just go for it and if it freezes so be it, you guys were right so close it would have been daft not to do it and thanks for the tip on the theatre site. I see we have just missed meeting again as we are below Buckby and not following your route after Braunston.
Like to say hello to bloggers  NB Chance who passed us today. Also another reader Ross aka Bert the Gnome, I have e mailed you Ross.
Posted by Les Biggs at Tuesday, January 10, 2012

This might sound a bit daft, Les, but have you got any flood poles?

This drought will end, and when it does, we'd all better be ready.....!

Hi John
I assume, not being a river man, you mean the mooring poles with sliding rings to adjust to water levels or poles to stop the boat rising over the towpath.If so no. Most of the canal system is self leveling with weirs near rivers so there won`t be the drastic changes i`ve seen on the Trent and Avon.