Although i have the car to use and the weather is good, up to 93F, the ability to get out and walk around the open country is restricted by the fact that no right of way exists over the land. The fields around here are all growing crops of Wheat and peas mostly and that`s about all you can see for miles with no hedgerows dividing the fields and very little in the way of wooded areas. Even if you drive out a few miles and find something resembling UK landscape the land is private and you have no right to walk on it.

There are places such as Kamiake where we got married that are State owned but these offer nothing like the freedom our UK footpaths give us Brits so i`m telling you all be thankful. Jaq and I drove over the border into Idaho to have brunch with friends who have a ranch consisting of several hundred acres. 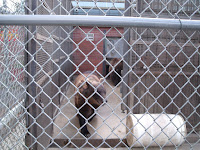 We all piled into a 4 wheel drive and had a tour and Larry and  Lael have said i can walk the ranch anytime. Parts of the ranch are heavily wooded slopes and are home to Cougar(Mountain lion) and Bears so a little care has to be taken.

A bit different to the UK where you might meet a Rabbit or a ferocious Fox.  The bear pic was taken at the Washington State University where the Bears can be viewed close up either in their holding pens or in the large open areas they can roam. 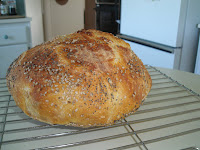 One of my new skills is bread making with no bread making machine. A nice tasty loaf i`ve covered in Poppy and Sesame seeds. All that`s needed is flour, water, yeast and time. Leave it 12 hrs to rise and cook for 30mins in a cast iron pot.
Jaq made it work on the boat so i decided to have a go on my own. 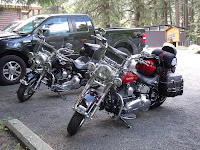 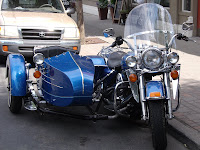 A couple of pics taken in and around Pullman, might be of interest to Mike.
2 Harleys on the left and a very nice side car combination on the right. Sorry i`ve lost the paper i wrote the bike name on.

Hi Les,
Your skills are ever mounting - the bread looks good enough to eat!
George and I and I'm sure everyone else who knows you and those who follow yours and Jaq's blog, will be crossing fingers and toes that you manage to collate all the paperwork you need, jump through all the hoops that are put in front of you and climb all the walls put in your way and return to the UK very soon.
Kind Regards to you both.

Good luck with paper work, are you sure this was the easy way?
Looks like another HD, see a lot with that shaped 'car, the extra lights are also typical HD.
Thanks for showing them.
Got out on the TRW this pm, just a quick run into town for medical supplies. Temperature here alos way warm, more comfortable in the breeze on 2 wheels than 4.
Mike, operator of Garnet's slowest triumph.

Hi Carol
Yes a nice easy loaf to make and very tasty.
The paper chase is on going but progress is being made.

Hi Mike
See a lot of bikes but not many stationery to photo.
Hot here in Pullman, it has been 89F but you can keep the temp if i can get back to the boat and i`ll put up with the English weather.