A happy new year to you all and if the cold and icy conditions are getting you down don`t despair the day`s are getting longer and summer is on the way. I always look on the Christmas break as being the summit level of winter and once it`s passed the view of spring and warmer weather can be seen from this high point in the not so far distance.

Well all good plans go wrong and this year wrong they went big time. After my trip to Paris the plan was to cruise north up the Gd. Union to Cow roast near Tring so as to be not only close to all the family but to also be in a better position to get through the stoppages at Stoke Bruerne and Braunston after Christmas.

It all went wrong a week before Christmas when the snow first fell but this didn`t put me off i decided to push on but after doing a few locks that were snowed in and walking across slippery lock gates i decided life was to precious and moored up for the holiday. After the snow came the frozen canal and more snow so i am now resigned to not getting past Braunston until the work there finishes on March 5th if BW finish on time. 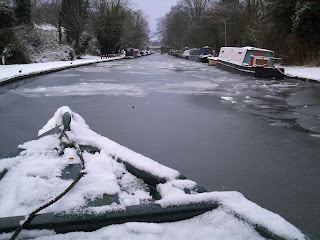 The section i was moored remained slightly iced up owing to the River Gade flowing in but above the lock the ice had taken a strong hold. in the picture above i had come up in the lock to get water and left the boat in the lock and managed to stretch my hose to the water point that can just be seen on the far left of the snowy towpath. It was then just a case of going back down in the lock and reversing to my mooring. So i have water, coal, wood and diesel also local shops nearby and the town centre 25mins walk so let it do it`s worse i will survive. 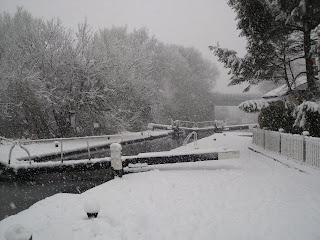 Next month will mark 4yrs of being afloat and i can tell you this spell of cold weather is the worst i have had. Now inside a boat the whole of the living space is about 18" below the waterline and below knee level is usually where the cold will first be felt but over all the past winters this has not been a problem for me until now and the plunging temperatures have made the below knee 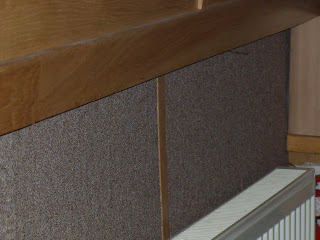 area uncomfortable. My solution was to add insulation to this area in the form of carpet with the top half of the walls left as oak panels, two days on and the difference is very noticeable.

Before the carpet solution having the fire belting out as much heat as possible led to an increase in condensation on the windows and so i decided to try a double glazing film that had been mentioned on a canal Internet forum and also by my friends Dot/Derek on NB Gypsy Rover. 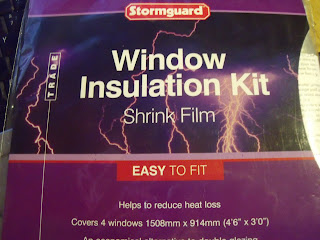 The result was amazing with no more wet windows to constantly wipe and the cost of 2 packs a modest £8.30. All you do is apply double sided tape around the frame, cut the film to size and apply to the tape and apply gentle heat from a hairdryer all over and the film tightens making all the ripples disappear. Tried to take a picture but the film was so clear it didn`t properly show so you just get a pic of the pack.

So a couple of jobs have helped pass the time and the weather forcast that usually i`m not bothered about indicates rising daytime tempratures towards the w`end so perhaps a move might soon be possible.
Posted by Les Biggs at Tuesday, January 12, 2010

7 comments:
Anonymous said...
Back to square one again, more snow in Hertfordshire to cause misery to all

Wed Jan 13, 04:41:00 PM
Carol said...
Hi Les, loved the Christmas video - welcome back to Blighty and the cold weather. We've experienced the same problems on Rock'n'Roll - the carpet solution is a great idea that we may copy. Sure you enjoyed your trip to Paris -the pictures were great.
Regards Carol and George

Thu Jan 14, 06:53:00 PM
Carol said...
Lovely pics of the snow Les, I am glad you are warmer now but more snow is forcast this week so get your thermals on. Gearing up for a canal holiday in March on the Monmouth and Brecon canal, I hope it doesn't keep snowing, my Dad says he remembers in 63 when the snow stayed around till March!! Happy New year.
Carol