AYLESBURY ARM without the boat

During my enforced stay at Marsworth i passed some time walking along part of the Aylesbury Arm. The arm is just over 6 miles long with 16 locks that drop the canal 95` to Aylesbury almost into the town centre.
Built in 1815 it`s cargoes included grain, timber and coal amongst others but as with transport on all the UK canals the coming of the railways slowly but surely took away canal trade.

The Aylesbury arm leaves the Gd. Union main line at Marsworth, far left of the picture below, passing the old works that once produced concrete pilings for the canals. This now derelict site 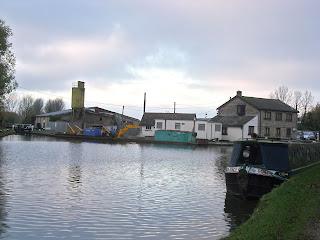 now displays notices of planning application for 14 dwellings. The buildings centre to right of picture are part of the BW maintenance yard that includes boaters facilities of water,rubbish and elsan and i hope this site is not part of the development. The picture below taken from the opposite direction shows the BW yard alongside the canal with the boaters services in the foreground and the start of the Aylesbury arm behind the building on the far left. 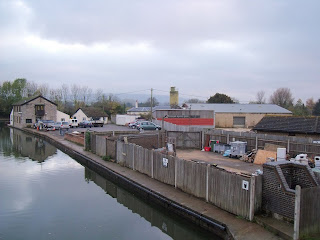 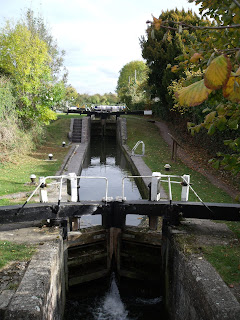 Standing on the first bridge of the arm the staircase locks, unique on the southern Gd. Union, lead you down past the cement works hidden on the left behind the trees. The difference for those that don`t know and i`m now bearing in mind readers from abroad is these two locks have 3 sets of gates. The section of water you see in the picture is duplicated above the gates seen in the distance and these gates not only form the exit from the first section of water seen but also are the entrance to the second section of water. So you have 2 chambers of water gates each end and gates in the middle, 3 gates 2 chambers against a normal lock of 2 gates 1 chamber. Hope that`s clear but if you`re confused look at the second picture below forget the chambers-gates and look at what lies ahead at the start of the Aylesbury arm.
Six miles of lovely countryside passing the village of Wilstone visible if you look hard but not much else in the way of civilisation. 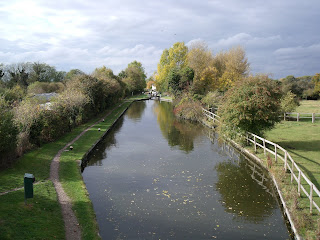 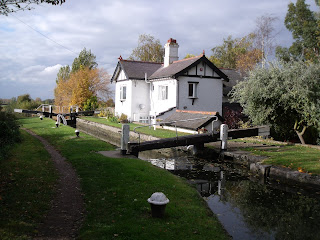 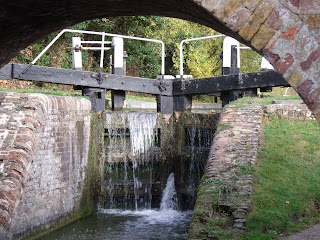 The arm ends at the basin run by the Aylesbury Canal Society since 1971 who have a lease granted by BW until 2018 although the current landlords are Aylesbury council who have plans for a huge canal side development. They are currently in negotiations with the society to re-locate to a site at Circus Fields to the east of town where another housing project is planned. 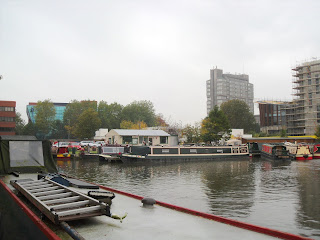 On the right can be seen building work already under way with a new theatre building in place and plans for housing and a supermarket etc.......Gas St. Basin comes to mind. Oh well they can`t build over every inch of the waterways so there will always be plenty of isolated quiet places to moor.