Left one of my favourite moorings at Newbold and stopped off at Rugby to re stock the galley at the canal side Tesco then it was on to Braunston for a few days now that the Historic Boat show was over. It would have been nice to be there during the show but mooring would have been a big problem so we decided to give it a miss this year. Had some family visit while at Braunston but more on that another time.
Leaving Braunston we re-fuelled at napton at 85p a litre, yes i`ve noticed the £1.30 prices at the garages and come November we boaters will have 47p duty added to our fuel thanks to the EU but the subsidy was good while it lasted and i don`t want any comments about boaters not having paid the going rate in the past as i don`t make the rules but if you must i will publish your thoughts.
Glad to have left the Braunston area as we can now fill our water tanks with clean water as the Northampton area has had a bug in the water supply and notices on the taps canal side have warned to boil all water before consumption, ok for showers or a wash as long as you keep your mouth shut i suppose. The worrying thing was the number of holiday boats filling up and I wondered if when they return the boats the holiday company`s will inform the next crew to boil as the bug will still be present in a boat tank for sometime which is the reason we waited till Napton as it was just out of the affected area.
So up through Calcutt locks we start cruising into Warwickshire. Stockton locks are interesting in that alongside the double locks are the remains of the single locks that the working boats had to use before the doubles were installed.
I have noticed a lot lately that BW are putting signs at bridges stating the name of canal and location ie bridge number , this to me seems a waste of money as the yob element in some areas seem to think it fun to uproot them and throw them into the canal. I imagine this must be a health & safety idea as some locations could be a problem for the emergency services but surely if the signs were fixed high on the bridge would avoid the cost of replacing the now floating signs.
Had an emergency stoppage along the way as BW had to do some urgent repairs to a lock gate but the hold up was only for 45 mins and what`s that in a lifetime of boating. 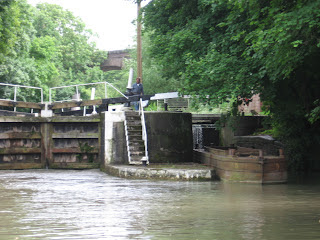 One of the single locks occupied by a BW work boat alongside the double lock. 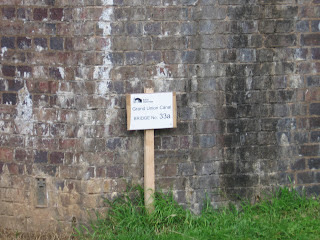 The signs put up by BW, this one still in place so far. 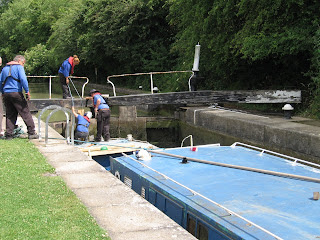 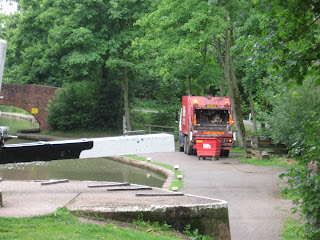 Noticed the boaters dustmen while waiting for a lock to fill. Keep up the good work lads. 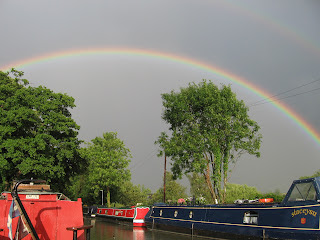 A rainbow over Braunston.
Posted by Les Biggs at Friday, July 11, 2008