First here are some pics of when Jack & Jordan brought my son Andy and Bev for a w`end visit,well they could hardly leave mum/dad home alone. So they arrived at Braunston and we cruised up to Newbold and had a meal in the Barley Mow and following a nice cooked b`fast Sunday morning made our way back to braunston. Had the expected arguments about whose turn it was to steer and pull back the throttle as we passed moored boats but it was lovely to see them all and the kids took it in turns to be captain. 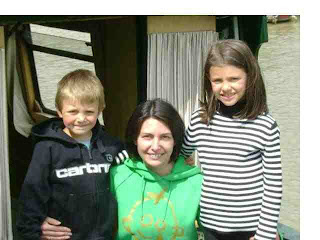 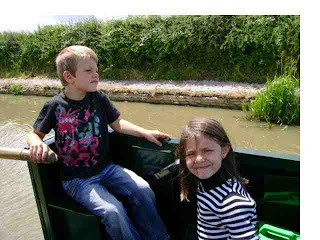 Now when Jack is captain he takes it serious and there was no way he would face the camera as he was watching for boats ahead so he said. 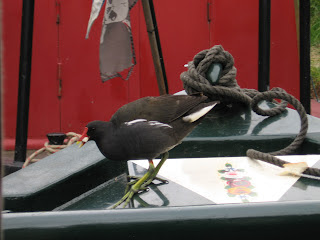 the floor on the front deck while i was sitting there and below you can see the reason was 3 youngsters to feed. Having been moored here a few days I`ve been watching them and just a few yards along the bank is another family and if the others roamed into the area of this family it was quite something to see the adults swim towards the trespassers tail feathers up head stretched forward and low over the water and if the intruder didn`t retreat it was war. 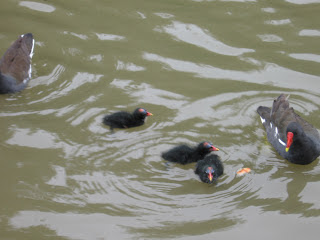 Went for a walk yesterday to check out a station as i will be going to see some of the other grandchildren this w`end and came across Jo & Keith on their boat Hadar it was a nice surprise as i was out when they passed by and good to have a chat, you know where you been or going and now i know so if you click on Hadar they might tell you, because I won`t.

Now the reason we`ve been moored up for a while is, well you know the saying "a bird in the hand is worth...... It`s now "a mobile phone in the hand is better than one in the canal" Yes i dropped my phone in the canal so i`ve been waiting for post to deliver a new sim card after buying a new phone so if anybody i know has been trying to reach me ...........just leave a message with Mr fish, Miss mud or Mr Tesco trolley and i will get back to you soon.
Posted by Les Biggs at Wednesday, July 16, 2008