ONTO THE BRIDGEWATER CANAL

Leaving Middlewich and passing through Big Lock so called as it is a double capable of taking 2 narrowboats ahead lies 50+ miles of no locks unless you count the stop lock at Dutton just before you enter Preston Brook tunnel. The stop lock here is a matter of inches difference in level so not what i call a lock proper. 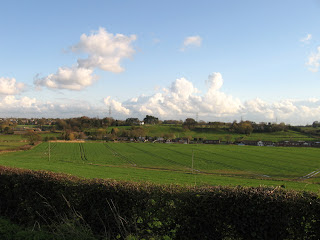 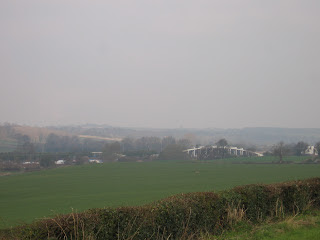 view i had from the boat high up above the R. Weaver and above looking ahead can be seen the white arch of Acton swingbridge on the Weaver, so altogether a wonderfull all round view.

The picture below shows the entrance to Preston Brook tunnel, this tunnel like the last 2 is only wide enough for one boat at a time. The other 2 being short it is left to the boater to look before 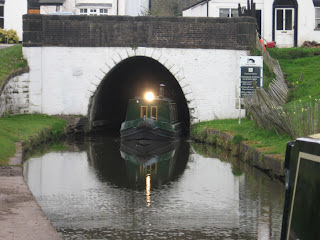 entering but this one is 1239yds long and it is time controlled. Going north as we are we can enter on the hour to 10 mins past and if coming south it`s on the half hour up to 10 mins after. This gives each group of boats 20 mins to travel through. On exiting Preston Brook tunnel we are on the Bridgewater Canal which was opened in 1761 and in 1885 the Manchester Ship Canal co. purchased the Bridgewater and all it`s assetts for £1,710,000. 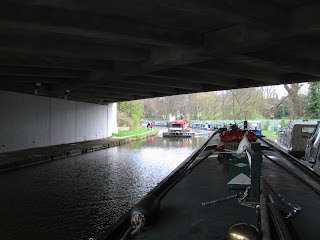 Below is Thorn Marine at Stockton Heath, the building is on borrowed time as it is due to be pulled down to make way for flats some of which are being built out of picture to the left on ground that was at one time canal company buildings. Also opposite Thorn Marine a large covered un-loading dock has been pulled down replaced by yes more flats. SHAMEFUL.
But that`s business and Peel Holdings who own the M. Ship Canal Co. have to produce dividends for its shareholders. 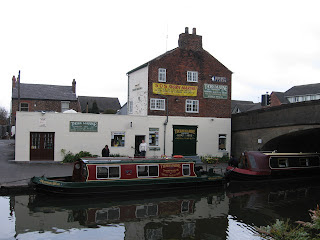 Below the village of Lymm with the streets coming down to the canal side. 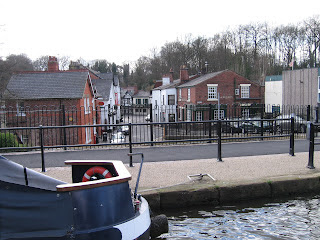 Next stop on the blog will be Dunham Town where something unusual happened, bikers and religion came together.
Posted by Les Biggs at Saturday, April 26, 2008