It`s nice to hear from readers and among several E-Mails of late was one from Bente in Norway who with his wife is shortly coming over for a 2 week canal boat holiday. Hi Bente hope you enjoy your trip .
We have been hanging around the Foxton area for some time and after attending the music night and boater Lynne`s birthday party so it was nice to move again.
The weather has been very varied lately with high winds, sunny days and the canal frozen over for 3 days. I think it was Wednesday just gone i was sitting out on the front deck reading in warm sunshine and as i type this the wind is really blowing and the wind genny is going crazy so i don`t think i will be running the engine for long this evening if at all.
Along the stretch i am moored at the moment are several boats on reserved winter moorings that will be home to them for maybe 3/4 months paying rent to BW on top of their boat licence fee, not my idea of boating but each to their own i say.
So plans have been made and we have all decided to go to York, Andy/Tina on Ytene and John on Tui. At the moment John is stuck at a stoppage north of Milton Keynes and as of this week he will be further delayed by the 2 week extension at the Buckby flight. The flight should have re-opened the same day as the Milton Keynes stoppage but upon draining the canal(pic lower down) further problems were found. Still John will put in some long days cruising and catch us up along the way.
Well my big 60 arrives in March and i will be going down south for a few days so that should give him time to catch up. SIXTY, where did the time go
In the days when young and bold
never a thought of growing old
looking back on times good and bad
things i should have done, people no longer here
makes me feel sad
but hey chin up life goes on for us still here
the grandchildren are smashing and get my vote
I`ll cruise with Valerie the rest of my days
growing old gracefully
on our boat.
The Market Harborough Arm stretches for 6 miles from the basin at the bottom of Foxton locks. Around 1809 the idea was for this arm to reach Northampton but it never materialised and it now finishes just on the edge of the town and the basin was once a busy industrial site with boatbuilding being just part of the scene. Today it`s mostly flats with one old canal building being used as offices and a restaurant.
Mid 18c Harborough was well placed for the industrial revolution being on the coaching routes of London to Nottingham and London to Derby. These routes were established well before the canal and railways came this way.
In 1889 the Symington Bros. built a corset factory in the town and this was the home of the Liberty Bodice. In 1935 they erected a building opposite for their employees bicycles and as in 1930s they employed 25% of the towns people i expect a small shed would not have been sufficient. The buildings are still there today with the factory being home to the public library and council offices while the bike shed is the M. Harborough theatre.

On the way down the Leicester Arm we stopped off at Welford Wharf the end of navigation on the Welford Arm. The arm when first built in 1813 went only as far as Welford Mill. Shortly after the one and only lock on the arm was built together with the Wharf itself and the George Inn now re-named the Wharf Inn, a lot of trading in coal, salt, granite and lime took place here.
Lime kilns were built at the Wharf the remains of which can still be seen. Limestone and coal for the kilns arrived by boat and return loads of lime would leave. 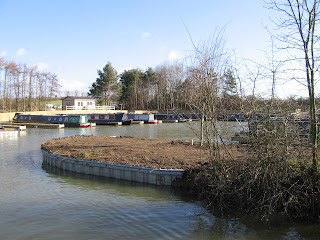 Above is the now open extension to Crick Marina adding 80 moorings. Back last year (see Sept 17th blog) they had just started digging it out. With all these new marinas being built i don`t understand why they don`t include residential berths, so many people are now coming on to the canals that can`t afford to buy bricks & mortar surely it would help them if some moorings were residential. 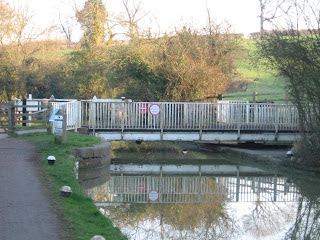 The swingbridge on the M. Harborough arm that carries one of the roads through Foxton village. 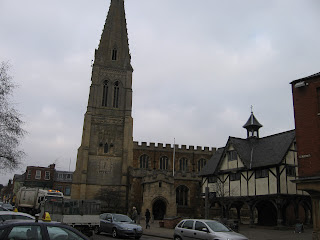 St. Dionysius` church in M. Harborough, the white fronted building alongside is the old grammar school built in 1614 below which a butter market was held. Behind these 2 buildings can be found the Symington Bros. corset factory and bike store. 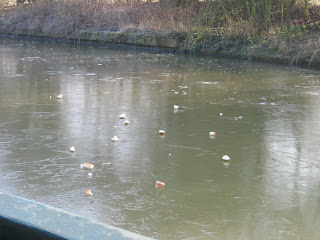 The canal frozen over with some bread i threw out for the ducks and moorhens but also many other birds flew down to feed. 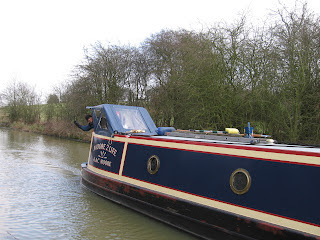 Above Chas on Moore2life passes by during the thaw. 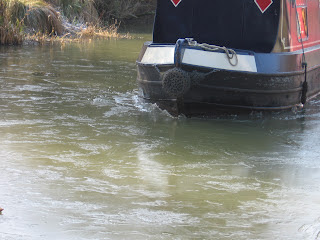 The boat above chose to break through the ice risking the ice cutting into the blacking at the waterline that would allow rust to form. Not a good idea as it can`t be touched up easily while still in the water. 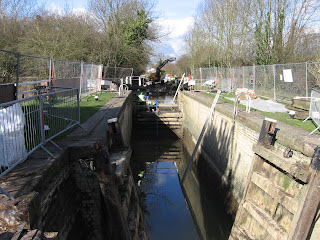 Above and below the whole of the Buckby lock flight has been drained for maintenance. Myself and Andy/Tina went prospecting along the drained canal and came back with fenders, 2 windlass (lock operating handles) and a coolie hat, it fits on top of the boat chimney to stop rain and wind blowing down it 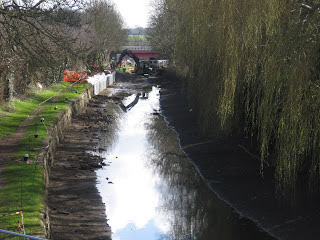 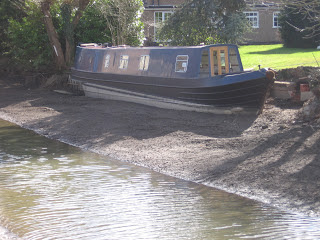 This boat belongs to the house owner and is moored at the bottom of his garden on the non towpath side.
Posted by Les Biggs at Friday, February 29, 2008

Well, i HOPE THAT BOAT OWNER IN THE LAST PIC GETS HIS WATER BACK IN TIME FOR EASTER, IF HE WOULD LIKE TO DO A CRUISE THEM

Hi Annon
It`s due to re- open on the Thurs before Easter w`end so he should be ok.