P0wer is one of the most important things to be aware of when living afloat and just lately i have been giving the subject a lot of thought. As you have read already the wind generator is up and running and helps to top up the batteries but whatever way you charge those batteries it`s the way you make use of the stored power that is the important bit.
Onboard i have mains power that is obtained via an inverter from the battery bank but the problem is it`s capacity is large at 3000w which is fine to run the washing machine, although i usually do the washing when cruising, but when all you want to do is use the laptop or watch TV running a 3000w inverter for 40w-60w is a waste. As far as the laptop is concerned i bought a 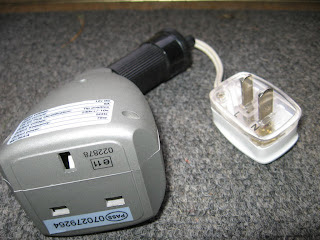 small 100w inverter from Maplins that as you can see in the picture above plugs into a cigarette plug to which i have connected a 12v plug and the laptop now gets its power from an 100w inverter as against 3000w. A small saving power wise but every little helps those batteries last longer.
Another thing I previously used the 3000w inverter for was watching TV and the 15" flatscreen i bought in Asda works on 240v but the current is stepped down to 12v and in the pic below the 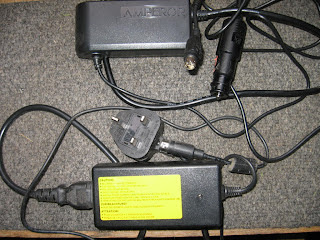 lower box connected to the mains plug is what came with the set and the box above it is the replacement. What it actually does is accepts a 12v input and gives out a stablised 12v. This is important as although the TV will run straight from 12v these flatscreens are very fussy and a rise in voltage input can render the TV dead.
So TV is now watched direct from 12v and as the Sky box also works from 12v there is no need to run the 3000w inverter. Since doing these changes i have noticed a higher battery reading in the mornings which means less engine running to charge batteries.

Right where am i ? Not saying exactly but have moved from Stoke Bruerne through Milton Keynes and L. Buzzard and am at the moment passing some time, before the boat comes out of the water so i can black the bottom, altering the locker at the rear of the boat to make it bigger to accomodate the water hose amongst other things.
Cruising along you see many things and in the pictures below is a boat that appears to have a tent pitched on the front and a summerhouse on the back. 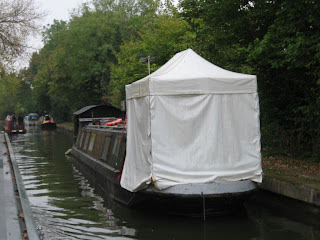 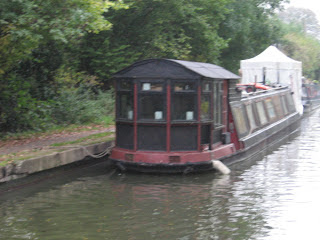 Oh well must go now as i am off to a firework display so i leave you with this sunset a couple of days ago. 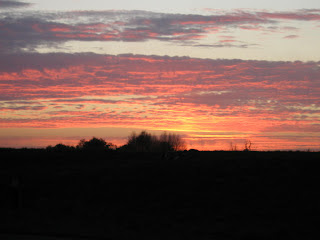 Goodnight and take care with the fireworks.

Bloomin' 'ell Les. We needed you last week with all your little inverters! Sharon needed an intraveous pump kept charged (She will DIE without it!) We were assured that the inverter would keep it charged as long as the engine was running (Which it was) on Thursday we had to ask the lovely lady who owns the craft shop next to the Shroppie fly to plug it into her mains as the battery was almost dead despite being charged all the previous day while we were cruising.

Hi CAROL
I assume the inverter was switched on, sorry no offence but i have overlooked simple things like that.
Perhaps the inverter was only able to power the TV and Sharons pump needed a bigger power source. Perhaps the inverter was just faulty, anyway at least you got it charged at the craft shop and yes that lady is very nice. The shop has only opened this year and i was moored outside when it opened.
Re your e mail yes will have to blog solo boating.

Yes Les, of course the inverter was switched on!! LOL. I Know what you mean though.

Christine at the craft shop has a regular customer in me, I only live 30 minutes by car away so I have been over there getting Christmas pressies.

Good luck with the blacking!!

Thanks Carol, looking forward to the blacking.
30 mins from Audlem eh, maybe next time i`m that way yourself & Sharon plus guests could visit.

Les that would be lovely. I am only there at weekends as I work in London during the week. Drop me line next time you are and we will bring a nice cake with us!