Well i`ve got the wind generator up and running. The Rutland 913 will put a charge into the batteries with a modest wind speed of 5 knots, just under 6mph. With a wind of say 28mph it should put in about 9 amps.
So far since trying it out the winds have not been great blustery but not continuse but still the batteries have gained at the end of the day even after using power all day. Don`t forget on a boat all your power comes from the batteries and the worst power consumer is the 12volt fridge/freezer, then you pump your shower water then pump the waste water overboard. Your cuppa needs pumped water to fill the kettle. The loo uses electric to flush, the radio/stereo all these things are taken for granted on land but on board you have to be aware of a limited supply. Anyway with the wind so far the generator has ended up putting back what i have used during the daytime plus a small amount on top. All this adds upto less running of the engine to charge the batteries. Fine if the wind`s blowing i hear you say, true so my next thing is to do some research on solar panels. The control box i have fitted to the wind genny also allows connection of a 100watt solar panel so no wind means the slar panel will help things along and if i get wind as well so much the better. 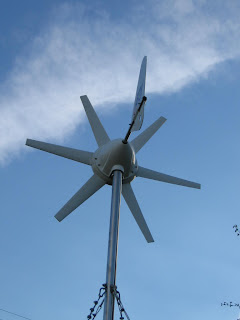 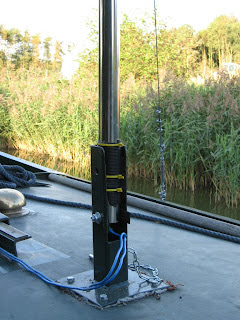 I have to thank daughter in law Bevs dad Alan for making the bracket from a picture of something similar and a few rough measurements i supplied. Thanks Alan it works a treat.
All that needs doing now is to tidy the cable by putting it into some plastic pipe and fixing same to roof.
Posted by Les Biggs at Wednesday, September 26, 2007

Glad to see you've got the "windmill" working. Say "hello" to everyone for me. Sandra

It is such a good thing that you are doing here. Saves a load of diesel for just a relatively small outlay on the kit. It will surely repay in real money over time and the solar panel(s) will add to this good effect. BIG TICK from here!
S

I wonder sometimes at the relative cost. A battery costs say £55 (average, I don't know the cost of the wind generator. My narrowboat uses about 1.75 at worst an hour on diesel, costing average 96p.. say a pound an hour. I run 7 domestic batteries, run 1.5 hours a day if moored.. who has a calculator?

Hi SUE
Cor blimey girl can`t be getting a calculator out, to busy chilling out.
I actually bought the kit well cheap from a boater who was going into a marina on a perm hook-up so didn`t want the wind genny.
Yes i agree it will take a long time to pay for itself but it has reduced my engine running (when the wind blows) so i`m happy with it.
Maybe i`m going soft and green in my old age.
Look forward to seeing you sometime, say hi to Vic.

Hi Sandra
It`s a wind genny not a windmill.
See you soon.
PS your cakes are scrummy.