Foxton Locks are on the Leicester Arm of the Gd. Union Canal and consist of two lots of 5 staircase locks with a passing pound in between. The rise is 75 feet and as you can see in the 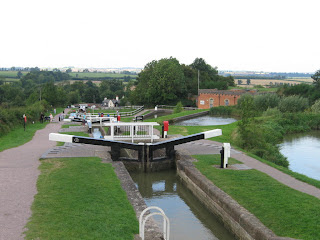 picture from the top you get a panoramic view of the countryside. The locks opened in 1814 and passing through the flight takes about 45mins. Behind me at the very top stands what was once the lockeepers cottage, now a coffee shop, and next to it the original stable that gave the boat horses a well earned rest for the night. Nowadays it is used for school visits when it has information boards and seating for visitors to eat their sarnies.
On the right of the picture can be seen the museum that once housed the old boilerhouse that provided power for the Inclined Plane Boat Lift. 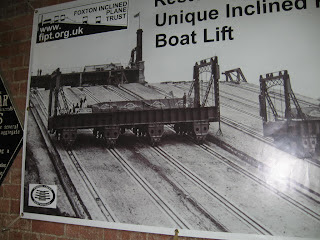 In the picture above that i snapped in the museum you can see how the boat lift operated.
Two metal troughs each carrying 2 narrow boats counter balanced each other taking boats up and down the slope. the power was via a steam engine.
The lift opened in 1900 to help speed up passage through the locks so that canal companys could compete with the railways for cargoe carrying. Sadly in 1911 with road transport being a huge competitor the lift closed to save money and boats reverted to the lock flight.
Below is all that`s left, just some of the track bases that carried the rails. It is hoped that with 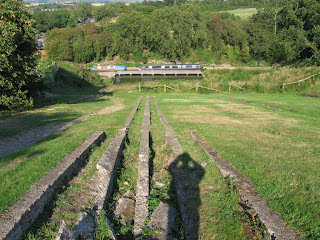 fund raising and Lottery grants the boat lift can once again operate. A lot has been done around the site including clearing the slope so the tracks can be seen and at the bottom all the trees have been cut down so now the canal can be seen. 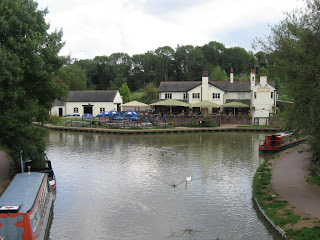 So i leave you with this view of the Foxton Locks Inn. Behind me the canal goes to Leicester, to the left Market Harborough and to the right is the entrance to the lock flight. Below the same view at night. The boat on the left nearest camera used to give horse drawn boat trips at w`ends but now sadly only for private bookings. 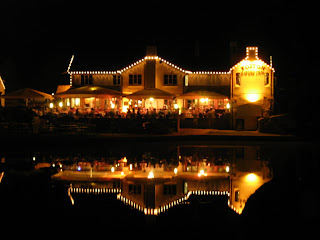 Hey, that's your shadow taking a pic!! How unusual.
Nice memories of the Foxton area. Thanks.

Hi Les
Did we spot Valerie moored by the locks / pub on the broad locks past Braunston this week? It was all locked up so couldn't call
Maureen Davies

Hi Maureen
Yes it was me moored by the lock near the Nelson pub.
Next move is down the flight turn and head south.
Shame i was out, maybe next time.

Hello Annon
Hmmmm that shadow could be me or myself or i, but their all nice people.
Glad you enjoyed your visit. X