UNEXPECTED DELAY TO THE VOYAGE

I have made a few changes to the blog layout, one change is the pic i have added to the heading. The pic was taken on the Caldon canal last year and shows NB `VALERIE` moored outside the Black Lion pub at a point that the Churnet Valley Railway crosses the canal in front of the pub. I had seen a pic of this scene in a waterways mag and decided to capture the same scene with my boat.
Having all met up at the top of the boat lift after our different lift bookings we set off south on the Trent& Mersey. The delay we now have is the failure of the alternator on Johns boat `TUI`.
At the moment it has been sent away for repair. Poor John is not having much luck of late having only a few weeks ago replaced his leaking calorifier(hot water tank) at a cost of £250.
Between Anderton and Middlewich is Marston that has for hundreds of years been an area of many salt mines the workings covering a large area underground. Subcidence caused the forming of Flashes as at Billenge Green & Croxton. In some of the flashes old work boats have 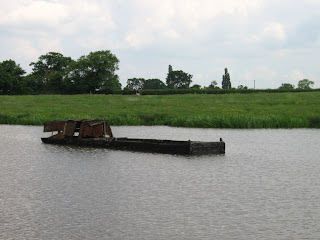 been sunk and left. The original edge of the canal in some places is just below the surface and in the pic taken as i cruised by the canal edge is about halfway between me and the sunken boat.
Bridges and roads in the area have been raised several times over the years because of the subsidence.
In 1958 the canal was re-routed for a half mile and some months later the area of the old route collapsed leaving a large crater full of water. 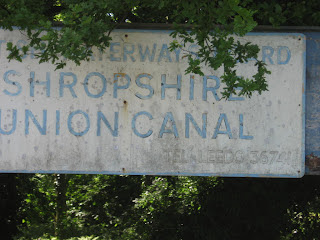 only British Waterways is used. Also in the bottom right can be seen the name LEEDS before the number nowadays we use an std number. Wondering when did these number changes start?
Posted by Les Biggs at Friday, June 15, 2007