Being delayed by Johns alternator problem meant we were in Middlewich for the annual festival which was quite nice and attracted a lot of boats. All over the town at variouse venues some being halls and others marquees music of all types was being played. Many of the pubs had continuse entertainment from the friday to sunday night.

The parade through the town was small but a lot of effort had been made on costumes. A fun fair was on hand for the youngsters and many stalls of all types filled the local playing field

Down by the canal a large grassed area housed a large cicus tent that gave anyone a chance to juggle and try their hand at variouse cicus stunts. Also in this area was the horse boat society giving a talk and demonstrating harnessing and the control of the horse using only voice commands, very impressive and most enjoyable.

Anyway in the last week or so we popped up the Caldon canal and being in the Churnet Valley the reception for TV, phone and internet was poor and at times non existant.

Coming back we had to use a section of canal that a river also used and because of the heavy rain of late.......so much for flaming June..........the river name of which escapes me at moment was in flood and we only just got under the bridge you can see Nb VALERIE moored by at the top of the blog and then i had to remove stuff from the roof. So having cleared the bridge by no more than a half inch, yes half inch it was that close the next 2 miles was hard goimg against the flow and was i glad to see Tina/Andy at the lock where the river flowed into the canal waiting for me with the gates open as the lock moorings were under water!
Anyway i am sitting in a library doing this blog because with so many pictures to show it is so much faster on a landline with Broadband speeds. Where we are moored at the moment is a good internet signal so i must get a picture of Molly and tell you about a bit of trouble with the boat on the next blog.

So i will leave you to look at the pictures. 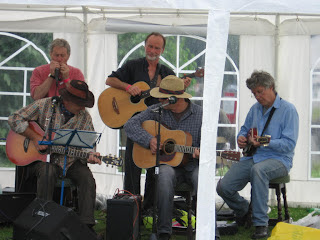 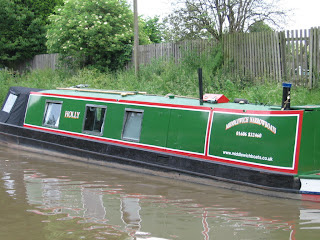 This is `HOLLY` a hire boat of Middlewich narrowboats. Now Holly is famouse all over the canal system as earlier in the year she was stolen by a chap who hired her leaving his van in the boatyard car park and paying by credit card and i am told having hired from the yard before.
He was traced on the South Oxford canal having painted the boat and altering the inside.
The canalworld Forum i belong to played its part in tracing Holly so she is now known all over the system. 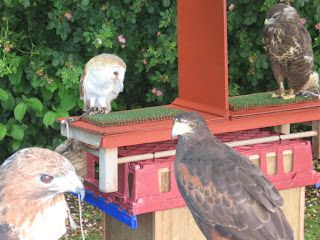 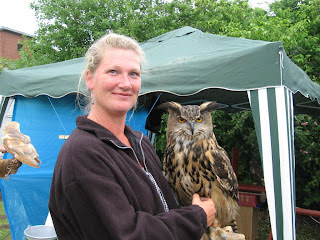 Tina holding an Owl that the handler told us was capable of taking a Fox. 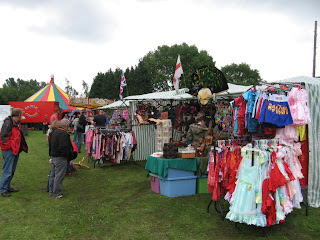 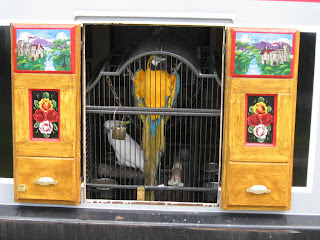 Ahoy shipmates. Lot of boaters have Parrotts on board. 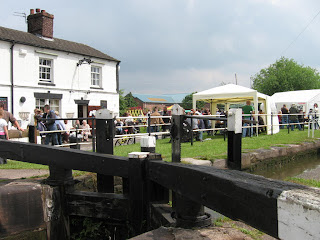 Kings Lock pub was our local during the festival. The top picture was also taken at the pub. 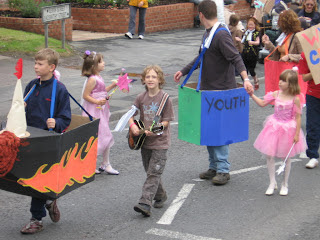 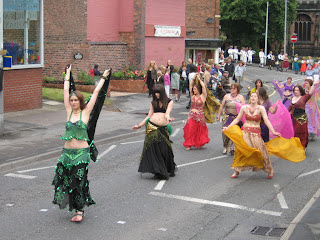 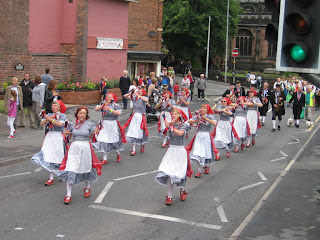 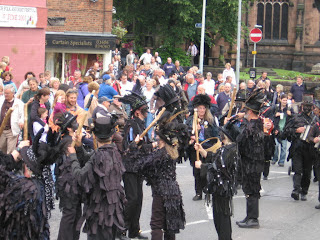 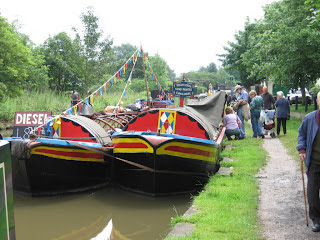 Les,
The river flowing along the Churnet vally is the R. Churnet .....
But yes I do know that section, the weir at the bottom is somewhat intimidating!

Hi
Yes as soon as i published the blog i remembered the name but thought and i was right someone will comment the name. Thanks
As for the weir i was going away from it so not to bad but i wouldn`t fancy coming with the flow towards the weir, but then if a boater was silly enough to ignore the flood level markers at the lock and carry on then they would have great problems missing the weir and getting under the bridge in such a current.