Taking this picture i am standing on the Trent & Mersey, well not in the canal but on the bankside and from the bridge to the lock in the distance flows the shortest canal around. The Wardle Canal flows for about a hundred or so yards.
Now what happened is that in 1826 the Ellesmere & Chester canal co. now known as the Shropshire Union wanted to build a branch into Middlewich from their canal at Barbridge. The Act that gave them permission forbade them going closer than 100 yds to the Trent & Mersey canal.
In 1829 the T&M Co. built the arm and the lock so they could control this jct. and charge for access to their water. Can you see the chimneys, they are on the Wardle Lock cottages and one 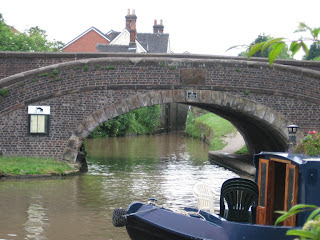 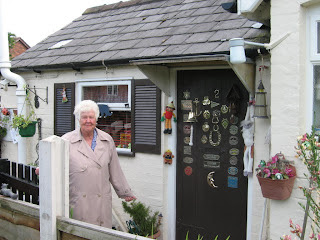 of them is home to Maureen who has been on boats all her life. Nowadays she spends her time helping boats through the lock opening and shutting the gates which at the age of ......( did you think i would reveal that) is quite something. At the age of 16 she was working a boat as a No. 1

(owner) moving all sorts of cargoe around the system. I had many a chat with Maureen both in the pub and outside the cottage and boy had she some tales to tell, her childhood was a facinating tale in itself but that`s not for me to tell here.
I saw this wooden narrowboat in a shop window and as you can see in the first pic it was meant to hold CD`s and as my CD`s are on a shelf above the TV i stood looking at it wondering if 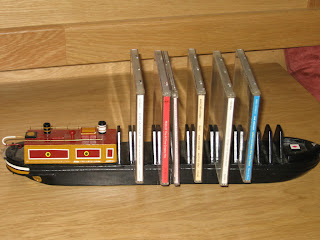 it would be any good to put my dinette place mats on. Now as you know place mats are larger than CD`s and would keep falling off the boat so i cut the boat in half and as you can see i now have a home for the mats and coasters. 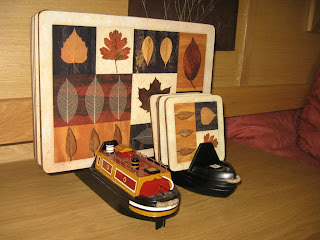