Moored for the night at Brewood and after a wash & brush we all went for a meal at the Bridge Inn next to bridge 14.
Brewood is small neat village that has everything shopwise from the village baker to it`s own police station with a butchers, small supermarket, bank & even a library in between. 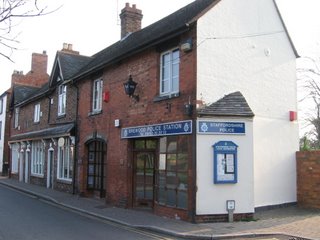 If only all our police stns. were as nice and only had to be as big as the Brewood Stn.
On we go heading slowly for Chester as we wanted to avoid the Llangollen in the schools half term. Passing Wheaton Aston you notice how fairly straight this canal is with very few twists and turns. It seems that when this canal was built the intention was A-B as directly as possible and this shows at Cowley Cutting where the canal has been cut through solid rock. As you cruise through the sides rise steeply and there are signs of recent rock falls. At the end of the cutting is Cowley Tunnell again cut through solid rock. So as you cruise into this tunnell and look up there are no brick linings to be seen just the rock. 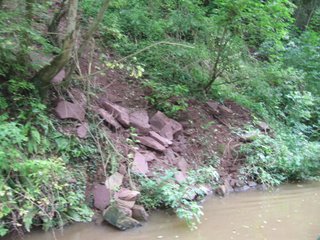 There were signs warning of rock falls 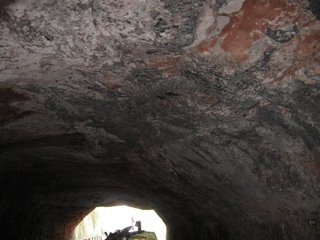 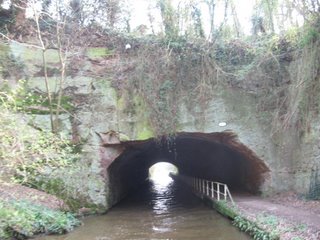 No messing they just went straight through the rock
Exiting the tunnel brings you to the village of Gnosall and 2 miles further Norbury Jct. the scene of a recent boat tradgedy when a couple in their mid 40s were killed on board by a carbon monoxide fumes from a poorly maintained gas water heater. Police tape is still evident as we pass.
News, both good and bad travels fast on canals either by chatting to other boat crews as you pass through locks or internet sites such as www.narrowboatworld.com or www.towpathtalk.co.uk the latter is also in print and available in boat yards amongst other places.
The Anchor at bridge 42 was a night stop. This pub is the size of a house, probably was in the past, and as you enter each side are 2 house size rooms each with open fires. The bar is about 10` long and passes through the dividing wall into each room. It has a couple of pumps on the bar but a lot of beer is served in jugs from the barrell. Scrumpy as well!!
Posted by Les Biggs at Wednesday, April 11, 2007

Hi Les,
Your latest post brought back some nice memories of our Jan holiday when we hired a boat from Norbury Junction. We had a great week and spent the last night in the Pub you described so well, great chinese near the bridge too !
Happy cruising, still hope to bump into you one day.
Les D

Hi Les D
Yes thought i might have bumped in to you back on G.U. South down your way but hey one day eh.
Are you near to getting a boat?
Look after yourself.

What has happened to your update, it is over a week!! Trust all is well and you are not too far off the Welsh beauty.

Good progress Les.. we are heading that way..

Just a bit of info for you.. which I know you love about canals in general.. Brewood is pronounced Brood for your information!! Teehee!

BTW, last month's Towpath Talk had No Problem on the front page! :)

Hi Handyspanner
Signal not been great each time i wanted to update.
On Llangollen now....beautiful

Hi Sue
Yes i saw you on the front page.
Your re-paint looks great.
Will try and phone you again, no answer last time.
Be Safe and hi to Chas/Ann