A couple of miles on from our night stop at the Anchor pub we came to this old chocolate factory, and it was from here that chocolate crumb was produced and loaded onto narrowboats to be taken to Cadbury`s at Bournville. When this prodution ended the factory produced only dried milk powder. 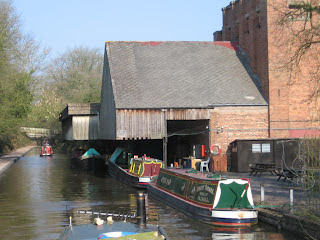 Spent the whole Easter w`end at Nantwich just lazing in the amazingly good weather for a Bank holiday. Nice and handy for stocking up the freezer with the benifit of of a Morrisons S`market and a nice selection of shops. Treated myself to a canal painting by a local artist of a narrowboat at nearby Hassle Green, 22" x 17" framed and a bargain at £20 not a print but a pukka paint job. Will try and get a pic of it hanging in the boat.
Below is the Crown Hotel in Nantwich, re-built in 1585 after a previouse coach inn on the site was destroyed in the great fire in 1583 that destroyed a large part of Nantwich. The other pic shows one of several Tudor style buildings in the town. 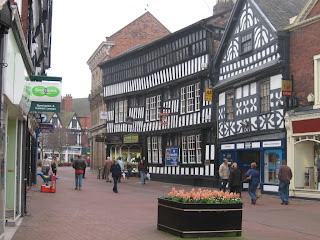 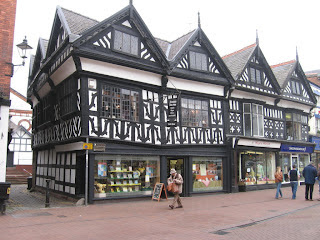 The remains of Beeston Castle can be seen for miles before you reach it. Built in the 1220`s by Ranulf the Earl of Chester. It sits 500` high overlooking the cheshire plain.
Henry lll used it as a garrison. Edward ll built more walls and strengthened the towers. It was occupied by both the Parlimentarians & Royalists during the civil war. It has a well of 370 feet that must have been ideal for long sieges. 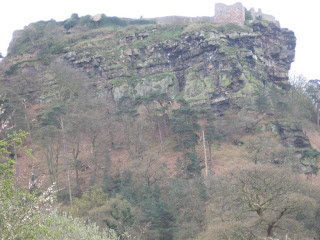 As you cruise along at such a slow pace without a care in the world it`s nice to observe the wildlife around. The Buzzards high in the sky hovering over the fields looking for a meal. A kingfisher flying past settling on a tree ahead and as the boat catches up off he goes to perch further on. I have been lucky enough to observe one diving into the water and catching a small fish. Ducklings are plentifull and the largest brood has been 13. Only today i witnessed nature in action when a duck with 6 babes was on the towpath and as they all waddled past a tree a crow came down from above and snatched a duckling. Perhaps this is the reason they have such large broods for they also lose some to Pike. Not much of a start in life attacked from above and below. Saw a baby lamb just born with mum licking it clean.
Just waiting now for the cygnets to hatch this mum has 10 eggs in her nest. 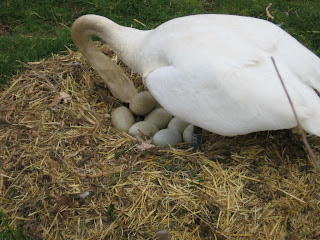 So a very good start weather wise to the year and long may it last.
At this time we have started to cruise the Llangollen and Tina is becoming more nervouse by the day as we have to cross the Pontycylitte Aquaduct on this canal and at 130` high her fear of heights is worrying her. She will be fine with 3 men a cat and a dog to look after her.
Hi Sandra, Tina is in good hands and thanks for the ginger cake, yum.
We popped upto Chester for a few days before returning down the Shroppie and turning onto the Llangollen at Hurleston Jct. next to the reservoir of the same name that holds 80,000,000 of water that flows down the canal from the R. Dee up past Llangollen.
Chester was not as nice as last time John & I visited back September time. We then had 6 very peaceful days but this time the yob element reared it`s head and at 3am Johns boat was set adrift and stones thrown at the boat so they could watch him get back to the mooring. The stones hit my boat and with Johns boat bumping into Tina/Andy we all were up. Still the kiddies had their fun on the way home from the clubs and no damage was done.
Anyway in complete contrast i am sitting typing this out in the countryside with a lift bridge just ahead the doors are wide open and it is so peaceful.

If you are going to write about things at least get the facts right.

Pontcysyllte Aqueduct - Thomas Telford's engineering legacy The famous engineer, Thomas Telford, built Pontcysyllte Aqueduct near Llangollen in 1795, and the structure continues to represent a masterpiece of Georgian engineering. Taking 10 years to build, the first stone was laid on 25th July 1795. To Telford's credit, just one life was lost during the construction which, for that time, was as impressive as the engineering feat itself. The Pontcysyllte Aqueduct takes its name from a triple arched bridge a little further up the river and, literally translated, means 'the bridge that connects the river'. The canal is fed from the River Dee and the fall of the canal from its source is one inch (25mm) per mile.

The aqueduct is built on one strata of rock, each pier being constructed of local stone and rising to a height of 116ft (35m). The support piers are tapered, measuring 27ft (8m) in width at the bottom and 17ft (5m) at the top. 19 cast iron arches, each with a 45ft (13.6m) span support the bridgework. Mortar used in the construction comprised of lime, water and Oxen blood. The iron castings were produced at the Plaskynaston Foundy and each casting dovetail's into the next. To seal the ironwork, the joints were caulked with Welsh flannel dipped in boiling sugar, and then sealed with lead. The bridge section was made entirely from cast iron, the overall dimension of ironwork being 11ft (3.3m) wide, 5.25ft (1.6m) deep and 1,007ft (305m) long. Once constructed the trough was filled with water and left to stand for six months.

Pontcysyllte Aqueduct had cost £45,000 to build and was opened on 26th November 1805, in the presence of some 8,000 people. The opening ceremony involved the passage of six boats across the bridge, and back again, commencing on a cannon signal from the Royal Artillery from a platform below. The first two boats carried the managing committee and their families, the third carried the band of the Shropshire Volunteers in full dress uniform, and the fourth carried the civil engineers. The last two boats carried a cargo of coal representing the first commercial use of the aqueduct.

I think you will find the brick piers are 116` high and then the trough about 5` plus whats between the trough and the pillars. Oh and plus standing on the back takes me up 5`8" Now lets stop here before we upset each other.
Anyway a few feet here and there.
I liked your comment untill the last 2 lines. Correct me by all means but come down off that high horse you might fall fool.

I agree with Les , there is really no need for insults , more importantly it is being nominated for Unesco world heritage status .
According to the Sunday Times it is 127ft high in its artical of April 22nd so short of getting out a Tape measure there can be no definative answer . The Blogg is great by the way.

Hi Gray Wolf
Unesco World Heritage Status, is that the bridge or my blog. Ha Ha
Your sunday times height now makes 4 different measurements we have seen in print.
I`m just passing on some bits about places to make the pictures come alive.It`s all what i have learnt as i go and hope it will be of interest to readers.