Stoke Breurne is a typical canalside village situated just south of the I 3/4 miles long Blisworth Tunnel.
The tunnel was started in 1793 and took 12 years to complete. In 1800 the canal had reached Stoke Bruerne from London and arrived from the north at Blisworth in 1796. While the tunnel was being constructed a tramway was built going over Blisworth hill. Boats would be un-loaded from both sides of the hill and cargoes would be transported by horse drawn carts running on tracks over the hill to be re-loaded on to boats. This went on for 5 yrs untill the tunnel opened joining the 2 waterways up.
In the 1980`s British Waterways spent 4.5 million lining the centre part of the tunnel and the tunnel was closed for 4 yrs.
Stoke Bruerne is a nice place to visit and indeed during summer months is very busy with people visiting the museum, taking boat trips or eating at the 2 canalside pubs. The lock flight also brings out the boat watchers so your steering skills have to be 1st class with such an audience.
Some nice walks across the fields and one walk led me to find the old Stoke stn. now a private dwelling but with part of the platform still in place. The original trackbed can be walked along and it actually crosses the old Blisworth hill tramway although the bridge has long gone the bridge buttresses are still visable. 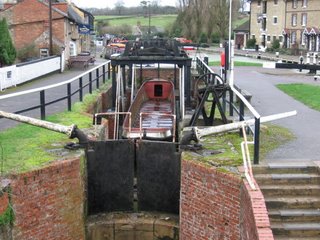 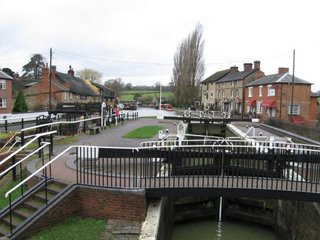 View from the road bridge. Boat Inn to the left and museum to the right. This is a double arched bridge, the second arch added when the wide lock was added. On the left is the original lock that now contains the Boat weighing scales. 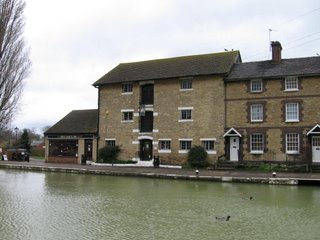 The canal museum set in an old corn mill. To the right one of those cottages was sold in 1947 for £400. Hate to think of the price nowadays. 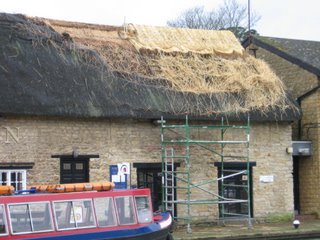 The Boat Inn having its roof re-thatched with Norfolk reed. The boat moored is used to take visitors into the tunnel. Just behind the scaffold is the entrance to a small shop within the pub that sells a few basics, handy for boaters as the village has no shops. 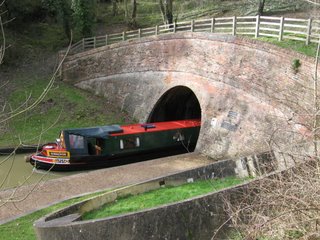 A narrowboat exiting the tunnel southbound to Stoke Bruerne. 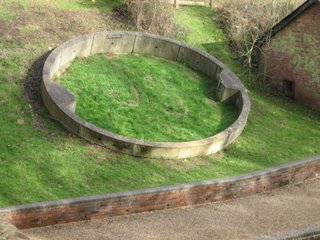 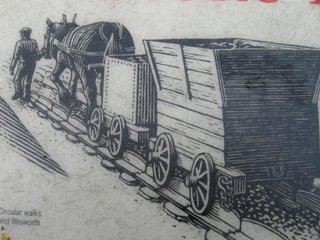 Took this pic from an information board at the tunnel mouth, handy things digital cameras. 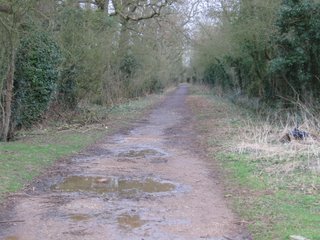 The Tramway route looking up the incline from the Stoke Bruerne side of the tunnel.
Posted by Les Biggs at Wednesday, February 28, 2007

Les
In a book I read, The Water Road, there was a spooky story concerning the Blisworth Tunnel, experienced by some boat women during the war! It really gave me the creeps, so if I ever get to go through it I will make sure I am not alone!!! Hahahahahahahaha

Found a story on the net about a couple hired a boat first time. They stopped at Stoke Bruerne after the tunnel and remarked in the museum that they hadn`t been sure which way to go when they saw all the lights.Turns out that the chap who was listening to their story worked out that the spot they had seen the lights was the spot where a lot of men were killed digging the tunnell by candle lights.
DAH DAH DAH Daaaaaa
I you want a tunnel trip no problem,bring the other half as well.

Les
Glad you liked the 'Baptism of fire' story!! That really was my first narrow boat experience and I must be mad, but I loved it and have done ever since.

The story in the book was about some war boat women going through the Blisworth tunnel, as they were going through, the steerer saw a barlow boat heading towards them and not moving over, then at the last minute the the boat woman had to pull hard right to avoid a collision and hit the side of the tunnel with the butty on the back.
As the Barlow boat passed she said the steerer was a very stern looking woman and it put her off having a moan at her. Later in the pub the girls on the butty asked her what the steering into the side of the tunnel was all about and she said something like 'That barlow boat was heading straight for us and not moving over or slowing down' And apparently the girls on the butty were gobsmacked as they hadn't seen a boat pass them in the tunnel at all!!! Some people in the pub overheard the conversation and told them of a barlow boat that had sunk and the crew killed outside the tunnel