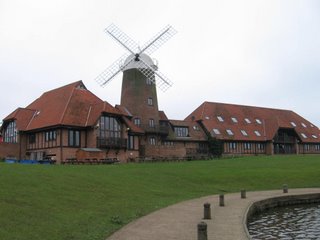 This is the pub/restaurant on the edge of Caldecotte Lake. They do a lovely sunday roast with plenty of tables overlooking the lake that is used by the local sailing club.
The lake was excavated in the late 1980`s each side of the River Ouzel to store excess rainwater and prevent flooding downstream of Milton Keynes. Many of the lakes in M. Keynes were constructed for the same reason.
This is a really nice place to walk around and has purpose made paths and a nice area of swings etc for the little ones. It takes about 90 mins to walk all round or 50 mins by using a bridge part way round the lake. From the canal you can access it at bridge 92 near the village of Simpson.


Further along the canal around bridge 81 Willen Lake can be found Gulliver`s theme park right next to the canal. This is not your Alton Towers type park and it has in fact many rides for the small people. In fact children under 90cm get in free. I did visit with 2 of my grandchildren a couple of years back and a great time was had by all. WWW.GULLIVERSFUN.CO.UK

Here at Cosgrove the R. Ouse is the lowest point between the 2 Gd. Union Canal summits at Tring and Braunston. Nine locks were constructed temporily while an Aqueduct was constucted to cross the R. Ouse.
The first Aqueduct was constucted of brick and opened in 1805 and collapsed in 1808. This resulted in the temporary locks being brought back into service while a new Aqueduct was built. This time they used a cast iron trough to carry the canal across. In 1811 the new Aqueduct opened and has remained in use, with the exception of maintenance in 1921&1986, upto and including a few days ago that we passed over it.
Unless you actually stop and walk around a lot of canal history would just pass you by. 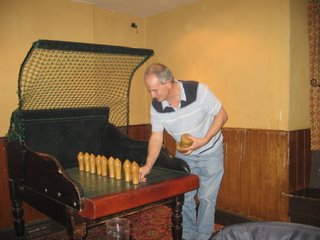 I am setting up the skittles for some trick shots, well boys will be boys after a few beers. 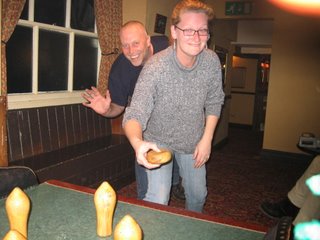 The Barley Mow in Cosgrove village is Tina`s first encounter with pub skittles. Andy is there as always giving support. 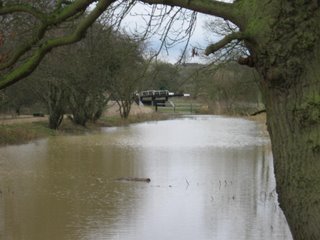 This is the view along the original canal. There were 9 locks that brought the canal down to the R. Ouse and back up to Cosgrove lock the only survivor of the flight. When i passed this way April last year the canal bed was dry but excess water on the R Ouse has flooded it. 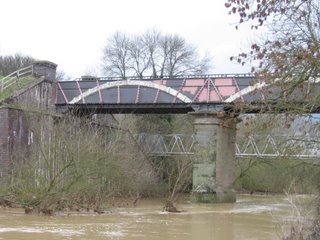 Cosgrove Aqueduct taken from the bank of the River Ouse. 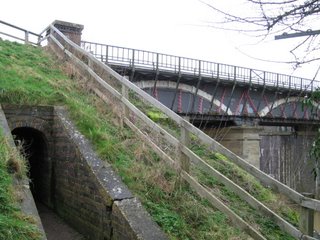 A view of the Aqueduct and to the left a small tunnel to enable farm animals to move from fields each side of the canal. 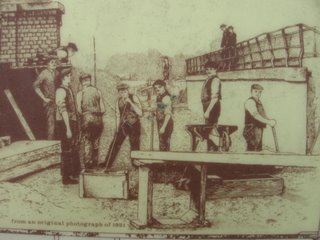 From a 1921 photo showing maintenance being carried out.
If you click on May 2006 in the archives to the left there you will find my blog as i last came north through here.
Posted by Les Biggs at Sunday, February 25, 2007