“Fate is like a strange, unpopular restaurant filled with odd little waiters who bring you things you never asked for and don't always like.” Lemony Snickett, pen name of American writer and musician Daniel Handler

How are things where you are??? Here in the Pacific Northwest (PNW) of the United States, the Army National Guard has been called in to assist Washington State with its pandemic response, along with California, and New York over on the eastern seaboard. We in Oregon are under a Shelter-in-place order with 30 days in jail and a $1200.00 fine possible although that will occur as a last resort. 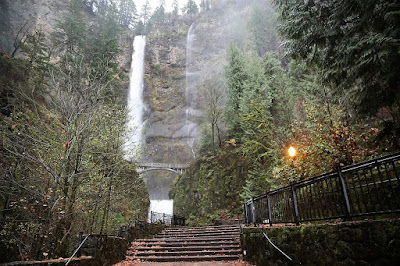 This became necessary as people incomprehensibly got into their vehicles and flocked to sites of natural beauty like Multinomah Falls and the coast, 98 miles away, to hang out in the several hundreds, because you know, if you are on a suggested self-isolating order in your county why not drive to another county and take a chance at sharing Covid-19 with them? I know the same thing occurred in Britain yesterday, for the same reason.
I found it necessary to go out for groceries yesterday. I checked online and Safeway opened at 6 am, Fred Meyers at 7 AM. I opted for Safeway and at 6:15 AM I pulled into the car park in the pre-dawn dark. The doors were locked and a note said they would not be opened until 7 AM as they are using the hour from 6-7 in the morning to clean and disinfect the store each day. I looked inside and I could see employees wiping down everything is sight. I should have just waited there...
I allowed impatience to guide me a fifteen minute drive through downtown Gresham to Fred Meyers--a large box store. There were only seven of us waiting in the car park at 6:30 AM. By 6:50 the entire side of the parking lot was full of cars. People parked in the pearly grey dawn, got out with their shopping bags and I noticed three distinct things: they were all senior citizens, many were disabled, and most wore either masks, gloves, or both. Then a curious thing happened. These vulnerable people clustered at the locked doors of the store in a large group! It was eerily like a scene from Dawn of the Dead Zombie Apocalypse.
I waited ten minutes until most of them had disbursed and then grabbed my grocery bags and headed inside. It took me about thirty minutes to fill my cart and buy some of what I needed. The shelves were mostly still empty; only four packages of boneless, skinless chicken limited to 2 packages per person. Plenty of packages of chicken wings, legs and thighs with the skin and bones still in them.
I discovered that women and men maneuver their shopping carts differently. Women are more careful. They look to see who is around them and gently swerve around each other. Men just plow through assuming they have the right-of-way. As I was standing in front of a mostly empty shelf looking for tinned fish, a man without a mask or gloves squatted down very close to me, brushing my leg as he reached for something on the back of a bottom shelf.
"Hey! You are too close, Please move back."
"Gee," he said as he scratched his head, "I didn't think about that."
Really???? I got the hell out of there ASAP and decided to swing by Safeway near our apartment for the missing grocery items on my list. I drive down Powell Boulevard and usually turn left on Powell Loop to take the shortcut back home. The Loop was blocked by multiple police vehicles with fire trucks and EMT rigs behind them. I carried on to Safeway and was pleasantly surprised. The store was nearly empty, the air was redolent of disinfectant, and the shelves and coolers were fully stocked. As I shopped I noticed employees removing the skirting panels on refrigeration units and disinfecting underneath and behind them. Safeway has instituted a Tuesday and Thursday 7-9 AM shopping time for seniors and other vulnerable people. I brought latex gloves with me and I put them on after I loaded my groceries on the belt to pay for them. I pulled my debit card out of my wallet , inserted it into the machine with my left hand, punched in my phone number, said no to a donation, and no to cash back, and then punched in my PIN with my right hand. I pulled my card out with my left hand and returned it to my wallet, and then removed both gloves to load my bags into the cart. I have no idea how often those debit card reader machines are cleaned but I wasn't taking any chances!
I took the back way to our apartment; as I turned onto Pleasant View Drive, I looked back down towards Powell Loop and a school bus was pulled off the road, hazard lights blinking with a road hazard sign blocking the lanes. Beyond it were scores of Police, Firefighters and EMTs in clutches around their vehicles. I looked for news of the incident later on but never did find out what had transpired.
Back at the apartment I unloaded groceries and the girls took them inside while I parked. I sprayed my hands with sanitizer, opened the apartment door, sprayed the outside handle, closed the door, sprayed the inside handle and my hands again. I pit my coat and my clothes in the wash and took a hot shower. I have a dry cough--but I've had it for several months along with a slightly phleghmy cough I always have every morning due to post nasal drip, but I find myself monitoring the rest of my body responses throughout each day. This is the first time in my entire life when I have been frightened to enter a grocery store, aware that my actions and my choices could result in my death or that of someone I love.
Posted by Mrs. Jaqueline Biggs at Tuesday, March 24, 2020

It sounds more like a military manoeuvre than a shopping trip. Do whatever it takes to keep safe. We left our winter mooring in Stourport basin two weeks ago and are now self-isolating at Wheaton Aston for the duration. We're moored just past the services and there are two corner type shops and a pharmacy so should be ok. We take our daily allowed exercise by walking to one shop or the other even if only for the paper. At times I wonder weather or not we should but we have no other way of getting food. Apparently there's now a three week wait for a delivery slot for on line shopping. Take care and stay safe. Love and hugs Judith nb Serena

Good to hear that you're staying safe Jaq. You are so lucky to have a car to get to the shops, as Judith above says, there's at least a 3week waiting list for supermarket deliveries and even then you have to have lightening speed to book one as they become available. I've always kept a good stock of cupboard items and a freezer full of meat so it's just perishables that we're going to have a problem getting. Hope the move to your new premises goes well. Miss you. xx

I've only been through Wheaton Aston once with Les back in 2012 but as I recall it is a sweet spot to fetch up any time.

It was such a weird experience feeling so frightened to go out and then to step inside the store. I will be grateful when all of this is behind us. Hopefully countries and leaders will have learned valuable lessons from this which they will then apply prudently with an eye to the future.

Give John a hug from me and keep a few for yourself,

Lovely to hear from you! Gosh this is so surreal isn't it? It kind of puts the kaibosh on selling your boat and buying a cottage at the present moment doesn't it? Hopefully you will still be able to get out and about around the area between Henley ad Marlowe without being mobbed by thoughtless townies looking to stretch their legs.

I hope we can still move in late April, given we are on lock down now.

We have a friend doing our grocery shopping now - she went and bought essential supplies the other day: chocolate and crisps ... When she dropped them partway down our drive, I brought them in and wiped all the packs down with a warm wet and detergented dishcloth. It's not that I think Wendy is a danger, but I have no idea who was in the shop touching stuff before she selected it.

I guess what I am saying is perhaps you could consider wearing the gloves from the time you get out of the car at the supermarket until you get home and have wiped down the groceries.

I wipe my cart down with antiseptic wipes that are available at the front of the grocery stores, and I only touch exactly what I want. I carry a sanitizer spray in my pocket that I use liberally as I shop, and once I get to my car I peel off the gloves, reasoning that my car is virus free. I am the only one who ever gets inside it and it has been cleaned thoroughly and I spray the steering wheel before I touch it and again when I get out.
My main worry is that one of my girls will bring it home. I have to remind my foster daughter to sanitize her hands every time she comes in. But so far, so good. She and my daughter in law do not interact with the public and they both have to take 10 minutes each morning to take a quiz about there they have been and that they have done in the last 24 hours and their temperature is taken before they allowed in the building. My foster daughter shops for cat litter at Winco and as she is on the lower end of the autism spectrum, she gets lost in the grocery aisles, window shopping for bargains on things we don't generally need. Some education is occurring there. Thank your for the good advice and for worrying about me.