I Cannot Help But Wonder...

"Suddenly she realized that what she was regretting was not the lost past but the lost future, not what had not been but what would never be." ~F.Scott Fitzgerald, American Author, 1896-1940

The quote for this post and it's title refer to Les. In the final months of his life Dear Sir wondered often about what amazing and wonderful things the future without him would herald. There is no way he ever considered the future marred by global climate change and a pandemic. I do find myself having conversation with him now, in my head.
"What do you think about the current state of affairs my love?" I see his spirit looking at the world from wherever it may be now, considering a much larger picture than I can see from my own myopic viewpoint. I suspect Les would be shocked and terribly saddened, frightened for those he loves, and angry. Were he still alive we would be on board NB Valerie and he would feel as I do, that living aboard on the cut is one of the safest places we could possibly be during a pandemic. With his near encyclopedic knowledge of the canals Les would have chosen the best place for us to fetch up in order to wait things out, move once a week to fill with water and empty the rubbish, and get groceries delivered. We would have faced the fear and uncertainty together gathering strength from each other.
Meanwhile my friends and loved ones on boats have issues of their own to contend with; the ubiquitous usage of the towpath by non-boaters for jogging, bicycling, and walking groups along with dog walkers all crowding in along a narrow towpath to escape the lock-down and get some fresh air and exercise. Never mind they pass within two feet of people on boats who need to get off and on unimpeded and attempt to do so while obeying the six foot self-isolation rule. After all boaters aren't real people are they? Its only a puppet!! (Brits will know to what exactly I am alluding with this statement!)
I always found it comical when Les would bring us in to moor somewhere that appeared to be way out in the country and by the time we had properly moored up at least eight people and their dogs would walk past on the towpath, and that was on a weekday in mid-morning! I've been woken many mornings by townies standing out on the towpath by the boats, dogs running loose to piddle while their owner takes that moment at 6:30 AM to call someone and have a conversation loud enough to be heard five boats down, completely oblivious to the fact that people actually are on those boats, curtains closed, asleep in bed--or they were before the dog walker decided to have a conversation on the cut.  Below is the latest poster from Canal River Trust (CRT) regarding this issue: 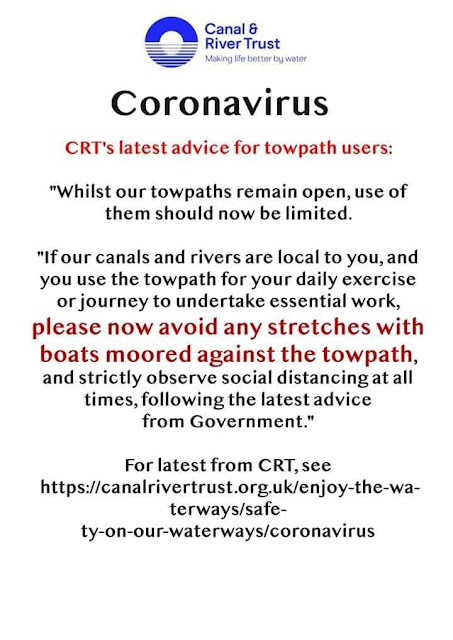 My email inbox receives a daily news update from the New York Times newspaper. Yesterday's update included a link called The Great Empty, of photos taken around the world of famous cities and sites eerily empty of human beings.
Looking online I came across a Youtube video someone filmed of seven minutes on a double-decker bus through London's Westminster, Trafalgar Square, Picadilly Circus, and Oxford Circus. I am familiar with this route as Les and I traveled it by bus quite a few times on our three forays into London by boat. This was filmed two days ago. It was seeing London so empty that got me to thinking about Les. Having been born and raised in Paddington (West London), Dear Sir loved showing me the great city and I loved finding new things that surprised him. I can imagine Les' face, watching the video with me, astonished and shocked at the empty streets and the abandoned feeling at Westminster Underground station which usually has people boiling up out of it like ants out of a giant underground mound. Nearly nine million people live in The Big Smoke and one million more commute in and out daily with 2.56 million cars licensed in London. No trouble getting a seat on the bus these days!
For Americans reading this blog who have never been to Britain, I urge you to pay careful attention to the signal lights. There are three sets of lights for each direction, mounted on three different posts on each side of the street! British signal lights turn green-yellow-red-yellow-green. Why the extra yellow you might ask? I was told it was to signal the driver that the light was about to turn green! I could not for the life of me understand why this was necessary until I discovered that British drivers are supposed to use their parking brake each time they stop.
Notice the lack of street signs with actual names of streets in plain view, and how directions are written on the lanes. Notice too how narrow the streets and the buses appear! The video begins with Westminster Bridge and the Houses of Parliament across the Thames on the left. Watch this in full screen view so you can stop it to really look at things as the journey presses on. Look closely and you will see signs about half way up on the outer walls of buildings at each junction or intersection, which is where the actual street names are located. See if you can easily spot crosswalks in the video. In London they tend to be at the top of the lanes by the signal lights but everywhere else they are located back down the lane before the actual intersection.

Notice how quiet things are on the bus, and how stunningly free of litter and clean the streets are without humans everywhere. Below is a video of what Oxford Circus Underground station is usually like!

Hi Jaq, we're all ok on NB Bendigedig. Currently fairly safe in Whixall Marina which is still open for fuel, coal and wood for those who live here. We've been having shopping deliveries but have to arrange weeks ahead. We're missing going out for trips but hopefully it'll soon be over. The news is quite frightening stressing those who have died rather than those who have got better. Thinking of you, love Elsie & Eric x

I am relieved to know you and Eric are still dong well.

I think the reason stress is on how many died is because if people don't listen and self isolate then we will have the same kinds of issues as London had for the plague of 1666. It started with warm weather in May with 14 people dying in one week. The following week it was 48 dead; it quickly jumped to over 1000 dead in a week by June when a mass exodus of London began. When the plague finally faded in Autumn over 100,000 people had died. That still left 300,000 people alive and well.

Hello Jaq,
Good blog-thank you...and good to hear you are staying safe.
The little of Les I knew tells me he would have been wise enough to see that no matter how this turns out there will be some good coming out of it; a rearrangement of personal and governmental priorities for a start.
Love from Cow Roast
Mike and Pam

Jaq, thank you for the post and links, I will take the bus journey later!
We are both well enough, although I have clocked about 100 falls since Saturday, just the usual reaction to isobars rampaging across the landscape. We missed out on the start of the panic as we were on a hire boat (with poor internet!) on the Llangollen for 2 weeks, cut short by 2 days due to CRT closing things down. GARNET is still at Wigrams Turn and we have moved in with P's brother in Coventry, as we can no longer get weekly grocery deliveries from anyone!
Oh well, this too shall pass, and hopefully we will all be better for it!
Love, Mike & Phill.

Lovely to hear from you! You are spot on about Les. He always looked for the bright side of life. Let us hope the lessons of this pandemic do stay with us all and usher in global personal and governmental changes for the better.

My best to Pam and your families. Stay safe, stay well.

I am relieved to read you and Phill made it somewhere safe after your LLangollen trip. It must feel strange though to not be in your own home. I have thought of you often this past winter as one massive storm after another has scourged the UK.

I find myself also wondering what our mutual friend Bryce would have made of all this.

Stay safe, stay well. Give my love to Phill and keep some for yourself.